Best of the WORST

Best of the WORST 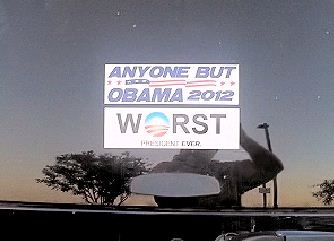 The wOrst: Do they give Nobel Peace Prizes to those who stir up antimony, hatred, division, racial strife and class warfare? It’s time for Sweden to take back the medal. Doping was involved.

Leno starts his monologue with a series of hits/jokes on Romney. He even gets the Obama talking point in there, that there attack was over that video. It’s amazing.

They need a takeoff of MC Hammer “Can’t Touch That” .. but with Obama “Can’t Change That, Can’t Fix That”.

I Believe … I Regret

I’m the guy that took the bumper sticker pics.

To be fair — this is San Diego, CA — a major military town with elements of all 5 branches of the military stationed here and the last bastion of predominate conservatism in the southern half of this state. But it is also quickly waning. Somehow — probably due to the average year round climate and proximity to beaches, mountains, desert, and Mexico border party towns — San Diego has recently become a homosexual boom-town. Plus the fact that our District Attorney is a gay liberal, 3/4 of the San Diego city council are gay liberals, the Mayoral election front runner(s) are gay liberals, the San Diego County Council has at least two gay liberals, and most of the suburban cities Mayors and city councils are largely comprised of gay liberals. At the rate San Diego’s going — we should be San Francisco lite within a decade or two. So, liberalism and its inherent insanity along with all of its other trappings insidiously creeps into our lives and grows stronger daily.

But — for now — most of San Diego is still an island oasis in a vast California sea of troglodyte homunculi, reprobates, degenerates, and liberals. Hallelujah.

So different from when my family moved here in the ’70s.

Being female and going to liberal schools, the mantra was that women are discriminated against in the classroom. Wasn’t my experience. The only place I’ve ever faced discrimination was walking around Hillcrest holding hands with my husband.

There is hope. I was shuttling my boys around yesterday and taking special note of cars with bumper stickers. I saw few political stickers, but more were anti-O than pro-O.

Yup! My wife [full disclosure: now ex-wife] and I went to a popular small Italian restaurant in Hillcrest once after it was recommended by a friend. There was a little bit of confusion as we waited in line to be seated and a publicly very amorous male homosexual couple behind us were about to be taken in and seated when my wife and I politely objected that we were ahead of them in line and we had been waiting 30 minutes already.

The restaurant realized their error and released the other couple and began to take us inside. Well — the gay couple freaked out and objected boisterously. I thought they were both going to give themselves aneurysms. My spouse got scared and wanted to just leave and go eat elsewhere. I was against backing down and I was really hungry — but I relented. As I was telling the staff we were leaving because of the scene — they insisted that we stay and took the gay couple to task — then told them they were no longer welcome.

That was the first time I had ever been venomously called a “breeder”. Seriously. They might as well have been KKK grand dragons and we might as well have been black. They let loose on us with a barrage of profanities and spittle laced invectives — but when they called us “breeders” — I could not help but laugh. My parting shot was — “Don’t forget that when you’re spewing your hate and vitriol at ‘procreators’ — that you’re Mothers and the sperm donors were ‘breeders’ too.”

That just about sent them over the edge. You could practically see the steam shooting from their ears and hear the whistle. I thought they were going to get physical as we were ushered off and away inside. It was great.

President Worst reportedly has attended a few security updates now, but he is still saying that he had calmed the ME Seas, but then some hateful American made a video that stirred things up. There can be no terrorism, because the terrorists all love him.

Perhaps after his briefing, they should give Barack a little pop quiz, to see if he was paying attention. And given his inattention, perhaps he should be tested and searched for drugs. Why should he have more rights than a high school student?

“GET THE BEHIND US, SATAN’S SON”
[To the A$$hat We Reject as “The Won”]
What do you say, as your fame fades away,
Will you blame “fickle fate” for your loss?
What can you do, when the “faithful” you knew,
Turn away and seek some other “boss”?
You were feted and flattered–a “savior” they claimed.
“We are whom we awaited,” you cried!
With teleprompter on, and sneer firmly in place,
Few really knew that you lied.
The lies came so fast–you were sure they must last,
After all, you had carefully planned,
To subvert and destroy the Republic you loathed,
Would be done in four years at your hand!
We all started so well, on your “highway to hell”,
You and yours set a record for fraud.
The “apology tour” was a total success!
We suspect even Satan was awed.
The lies kept improving, your policies moving,
Us closer and closer to our crash.
“Kill our oil”; “run on wind”; “we’ll let everyone in”,
And those “seniors”?—so sad we don’t have the cash!
WHEN will history say, things did not “go your way”,
“How in hell” did the “rubes” find your flaws?
With your Media Whores, you should win all the wars!
You finagled and fixed all the laws!
• In time we DID learn, that you NEVER had earned,
Even ONE THING you claimed to be true.
(“But I sealed EVERY record” you whispered to friends),
And no one played “RACE CARDS” like you.
Your plan’s coming apart, and you don’t have the heart,
To “regroup”, “start again” or “revise”.
The scheme’s “going to hell” so damn quickly,
You can’t even keep straight your OWN lies!
Because you’re so proud, you will NOT be allowed,
To just claim some “mistakes” and move on.
You’re dismayed at the fury of the PEOPLE YOU DESPISE;
And you’re STAGGERED your opponent’s so strong!
Guess you’ll just muddle through, till the voters tell you,
That your golfing adventure is DONE.
Get the “hell ‘outa our House” you servant of sin,
And STOP saying that you were “THE WON”.
No rights reserved. Change it to suit–have fun.
ROMNEY AND RYAN WIN BIG IN NOVEMBER VISUALIZE VICTORY.
Why does O run? To complete the destruction he so desires of a nation he so hates.