That seat has been taken

That seat has been taken

Following up on This is not the tweet of a confident man, friend of the blog Patricia found another tweet which no one else seemed to notice.

That seat has been taken, and is not about to be given up easily. 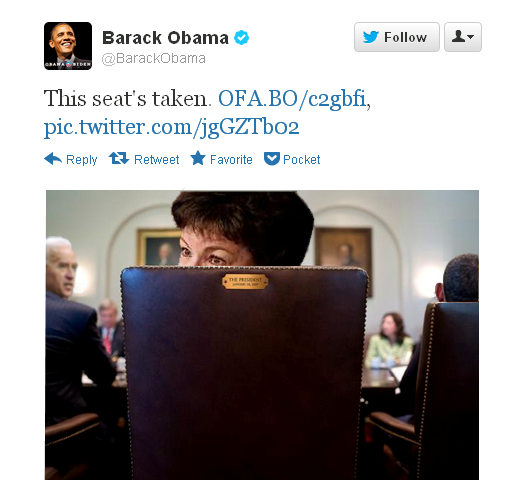 Did Rosa Parks except being told that “This seat is taken ?”

This one made me laugh, too.

THIS SEAT IS TAKEN:

I have predicted he will come unglued for all the world to see before November.

Did you predict he would become unglued on his own, or because of some Republican finally having the guts to do the ungluing?

Pressure. Remove his support and he collapses.

Why has no one reported on the Juma at the DNC?

Obama made Eastwood’s and our day with those tweets. First the pix, then he won’t go easy. Too thin skinned egotist got sliced and diced and let us know he felt every cut.

Destroying Obama is actually pretty easy. Except, for some people. (I won’t mention names, Boehner.)

You got to see and share this Jackie Mason (comedian) rave review of Eastwood last night!!!!!!!!

I really like this way this meme has taken off! It really pokes fun at Obama in a meaningful way, but doesn’t seem mean-spirited.

Imagine if the GOP hacks and John McCain did this to little barry in 2007?

While we’d have a hack a Stockholm Syndrome sufferer named John McCain for a president, we would not have Obamacare, nor Sotomayor or Kagan on the Supreme Court, nor a 20 trillion dollar deficit — nor a million other catastrophes.

Don’t worry about the GOP hacks: while they’re getting an undeserved free ride, like Boehner did in 2008, they’ll show their true colors soon after the election, and we’ll be battling them as much as the Democrats.

While McCain ran a pathetic campaign many voters weren’t really willing to listen to negative things about Obama in 2008. I know because I sure tried to tell them. I’d note that I’d lived in Chicago for over two decades, had closely followed the local political scene and that Obama had never been a leader. That his biggest claim to fame was all his “present” votes. That he never reached across the aisle. That he lived among race baiting radicals. No one wanted to hear it.

It was like watching a friend get married to a person you know is substance abusing jerk. You have to let them find out for themselves.

Correction: Boehner’s free ride started in 2011. Hopefully it will end in January 2013.

ABB. And don’t forget that asswipe McConnell. He has his nose so far up Reid’s ass that his feet are stained brown.

I wonder if Valerie will be living with the Obama’s in Hawaii.

“The Obamas Already Preparing for Move to Hawaii in January 2013: Hyde Park neighbors talking about Chicago house being sold soon”

Where does a man and his wife, who were still paying off student loans, have a monster debt on their current house, only got assets with the sale of his books, get $35 million to pay for a MacMansion? Is that where the stimulus money went? Tar. Feathers. Jail!

Besides, democrats are largely immune to getting caught with their hand in the till like Corizine diverting over a billion $$$ from account holders for MF Global.

I should be so lucky to have similar connections…

Seems he’s sold a lot of books. LOTS of them. LOTS more than even Jim Wright did, IYKWIMAITTYD.

Here’s my spoof on the doof.

This seat’s taken. What, you worry?
http://www.rokemneedlearts.com/images/obamaworry.jpg

The similarity of the ears truly makes it perfect.

Think about this response for even a moment and its churlish adolescence leaps out at you. This is how the President of the United State responds to a bit of mockery? By boasting that he sits in the president’s chair, and showing us his back? Can we imagine the media uproar if Bush had EVER responded to the tonnage of dehumanizing mockery and sent his way with such a swaggering and unfunny disproportion?

ECOTUS~The Blog of the Empty Chair of the United States
http://emptychairoftheus.blogspot.com/

I think at this point every photo showing Obama with another person can be safely captioned, “I’m with stupid.”

By the way, did you guys hear Obama has ordered all chairs to be destroyed?? —

Hmmmm, I thought that Obama told us that he was too busy to watch the GOP convention. Did he LIE to us, again, or did he make an exception for a Hollywood Icon?
Anyway, maybe Professor Jacobson can ask a Presidential scholar or biograher if there is any precedent for Obama’s Presidential tweet. I am just a ‘po country lawyer and I don’t believe there is such a precedent either under a Democrat or Republican POTUS. The fact that the MSM came down hard on Clint Eastwood and that Rachel MadCow was “speechless” leads me to believe that Eastwood mugged the opposition and they don’t even know it -Yet.

My own recommendation for 0bama’s seat:

It is the only throne he is qualified for…

Update on CNN Facebook Poll. More interesting than meaningful perhaps but it certainly says a different thing than MSMedia suggests

What did you think of Clint Eastwood’s appearance at the RNC?

Whoa! That’s gotta bite, even if it’s not scientific.

I have read a couple of comments on other sites where people are putting an empty seat in their front yard rather than a sign. One fellow said he’s already gotten some honks from passing cars. Good idea.