Problems, we’ve got a few

Problems, we’ve got a few

Reader Manny has to suffer through NYC subway nanny state posters day in and day out, like this one which he sent a while back:

It has been a while since I emailed but you still remain my favorite Blogger on my reader roll.

I use the NYC subway every morning to work and each day I’m subjected to Mayor M. Bloomberg’s nanny state advertisements. I always wanted to take pics and send them to you but I didn’t have a camera phone until last week. 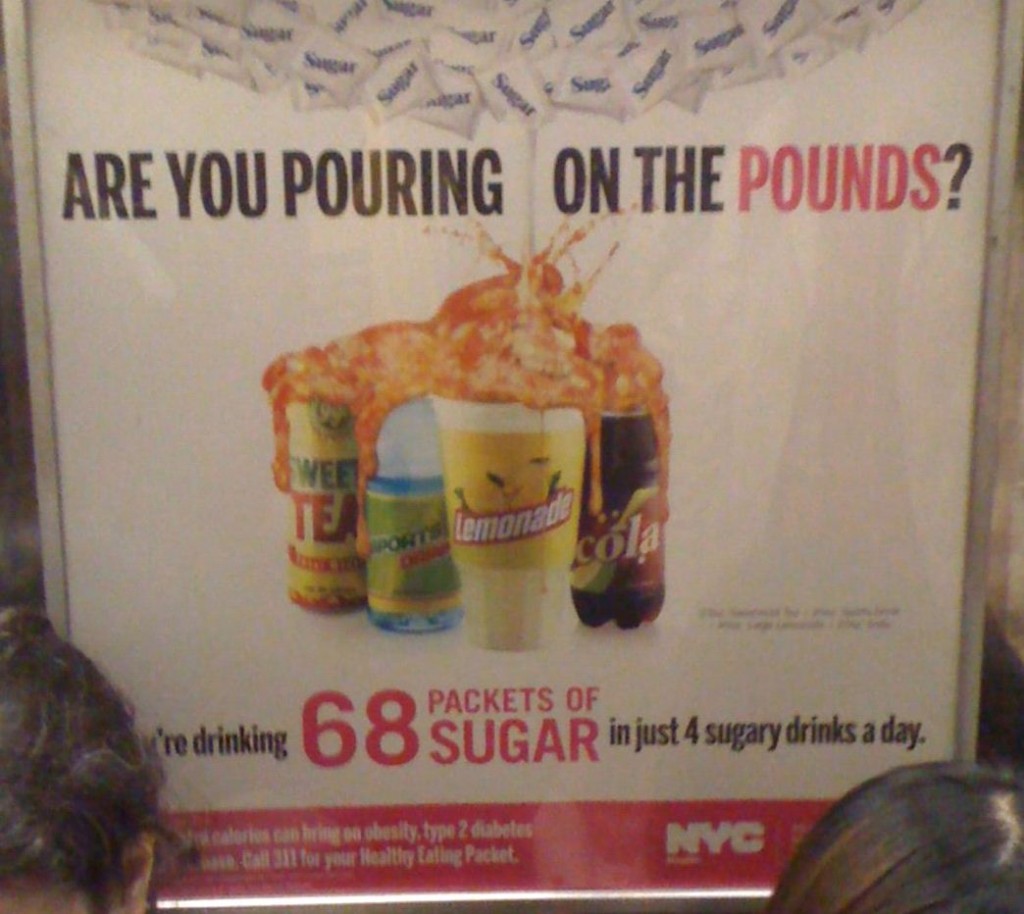 So I was glad to hear recently that Manny finally found one he could live with:

Manhattan Mini Storage usually runs obnoxious anti conservative ads but this one I agree with. 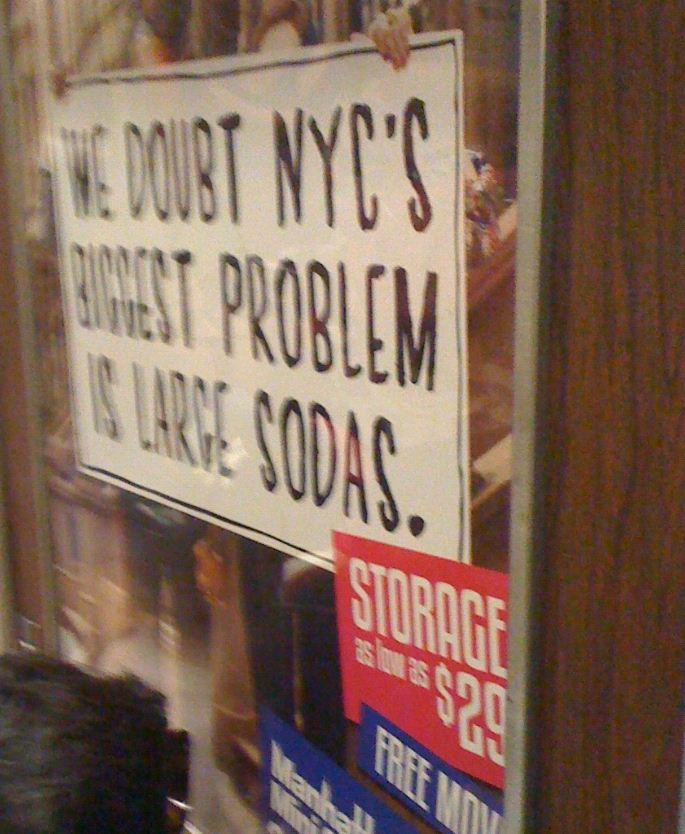 Wouldn’t it be better to leave them all in NYC where Bloomberg’s new surveillance supercomputer can keep an eye on them?

I keep waiting for the ban on alcoholic beverages. After all, not only are they fattening but they are a major contributor to domestic violence including rape and murder. Why won’t the NYC mayor do all he can to protect residents of NYC? Is he getting kickbacks from the alcoholic beverage manufacturers? Maybe he thinks murder is a way to slow population growth and save the environment. I bet he wants to put a condom on every container of beer/wine/liquor so that when the consumer commits rape at least there will not be any babies that need to be aborted.

When did we become such wimps? Ain’t it awful about those poor subway riders who have the nanny state posters to stare at day in and out! How long are we going to play the “Ain’t It Awful” game? After all, that’s what the Bloom, Obama, and the rest like them count on.

We’ll moan and groan about this rule, that regulation, or another law that infringes upon our freedom. We’ll complain to anybody who will listen. We’ll allow the infringements, but will we inconvenience ourselves to combat the ever-increasing control of our daily lives? This is exactly what they expect we won’t do.

We won’t do anything but mouth redundant words that have little impact, except to those who think likewise. Are we prepared to do more? Are we prepared to not only disrupt our lives intentionally, let alone to suffer (now there’s a word you don’t hear often anymore) for what we believe? They know we’re not.

As long as we just sit back and take their intrusions, well, there you go! If we’re not prepared to push back, and mightily so, then they’ll keep heaping more of the same. There are always ways to “strike” back. However, if we think acting like “a bunch of bi***y little girls” (to borrow a line from the sitcom Burn Notice) while continuing to go about daily living as we have will bring about desired changes, then we’re ever so delusional.

So, sit and stare at the d*** posters, but moan and groan to someone else! “Cause if you don’t like it, do something about it!

What would you suggest NYC subway riders to do?

We can point out the silliness and hypocrisy to others. Example whenever people mention the silliness of this ban-large-soda campaign I mention how state-paid health care is antithetical to individual liberty. Have I changed any minds? I don’t know. But some people have acknowledged that freedom and national-health care can’t co-exist.

What else should we do? What do you suggest?

I, too, am surprised at the load this camel has been able to carry. But have heart, they’re only adding to the burden. Nowhere is anyone removing it. One day that last piece of straw will be placed and you’ll get your wish.

ALman: I largely agree with your rant but I note you dont mention any specific actions either. As one who has spent 40 years on the mattresses in various forms of passive resistance to the govt i’ll tell you from experiance damn few people do more than bitch. If more people would simply stop writing the checks of enablement it would put an end to it. As my mentor at the time who went to prison said “cut them off at the pockets.” I’m not trying to put myself out as superior As one who has put in 40 and expects to keep going for the duration i’m just to damn tired to care what others think. .

Before telling the general public how to eat, why not improve the diets of those using the EBT cards? Our Nanny state allows “food stamps” to be used for “junk food”. They claim abuse of the cards (fraud) is only 1% now, since they went electronic. I doubt that, but everyone uses scanners now, so preventing fraud AND eliminating those evil sugar drinks would seem rather easy.

We could easily limit EBT purchases to economical and healthy foods, with a camera recording the purchaser at the time the card is used. We even have the technology to print tailor made dietary suggestions (even tied to their medical report) on the receipt.

“Mabel, you’re eating a lot of peanut butter lately … try some low fat ground beef for more iron and B12. That can raise your low hemoglobin count” 🙂

But the real effort is to buy votes, and those sorts of restrictions on “our” welfare class might upset those voters. So let’s just make big gulps illegal for everybody, and pretend we are providing for the common defense … against sugar.

Bloomberg wouldn’t be the laughingstock of mayors if he only stopped at INFORMING his subjects,…..um, I mean his electorate, instead of dictating their behavior. The subway signs would seem innocuous and maybe even appropriate without the mandates and endless drivel/speeches.

We had another cop shot yesterday. Of course the problem is that guns are readily available. IF there were no guns there would be no gun crimes.

Hoping that is sarcasm, because the “IF there were no guns” is naive and actually my argument for more of the citizenry to own guns. There are guns and the bad guys will find a way to get them. When has prohibition ever worked to the benefit of the law abiding citizen?

whoops looks like the editor doesn’t take angle brackets. There should be a /sarc at the end the post above.

It’s NYC: Blue Heaven, and par for the course.

Put those posters up in Denton TX, Colorado Springs CO, or Lakeside FL and see how long they stay up. They’d last 2 minutes in my home area in NC.

PS: And who’s to say people aren’t doing something about these posters in NYC? How does one count a torn down, missing poster?

Seems the only option is for liberty loving people to move to NYC. Yuck!

I have a feeling the smug elitists who continue to vote for Bloomberg love what he is doing. Their thinking goes something like, “if people won’t eat right and take care of themselves, we will force them to do it for their own good. Think of the CHILDREN!”

I see nothing wrong with providing information … I often glance at food labels to see how much saturated fat is in something I like to eat.

If it’s a lot, I eat it sparingly and vice versa.

Fine. Tell us how much sugar is in sodas … but then leave it to us to decide how much to ingest.

It would be nice if all the food brouhaha were at least accurate. Where are the government warnings against aspartame, which is a poison, and other artificial sweeteners. Where is the government clamping down against MSG and the stuffing of processed foods with high fructose corn syrup. Where was the government when Monsanto cronied the FDA into allowing bovine growth hormone into milk. Ditto the propaganda in favor of “non-fat” and against saturated fat (which is NOT harmful — it’s trans fats that are harmful). What in heck was the FDA thinking years ago when it removed most vitamin and mineral content from food labels, instead substituting nonsense that snookers the public, such as the touting of edible garbage as not having fat. Where is the government caution against genetically modified foods. Why aren’t the regulators cracking down on nonsense from corporate farming, e.g. Monsanto’s abusive lawsuits against neighbor farmers whose crops have been contaminated with Monsanto’s genetically modified seed. Where are the government concerns about chickens crammed into such close and toxic environments that they have to be pumped full of antibiotics, which go right into people’s food. Etc.

The eat healthy campaigns amount to a load of horseshit to snow the public and obscure the real issues.