It wasn’t a lie, it was the composite truth

It wasn’t a lie, it was the composite truth

Is it me, or does it seem like we are getting plenty of anti-Obama bumper stickers spotted on vehicles in hostile territory?

I’m seeing more in Ithaca than ever before.

From friend of the blog Jenny from Vegas:

@leginsurrection I love this one. I snapped this in Newport Beach, California… twitpic.com/an45vf 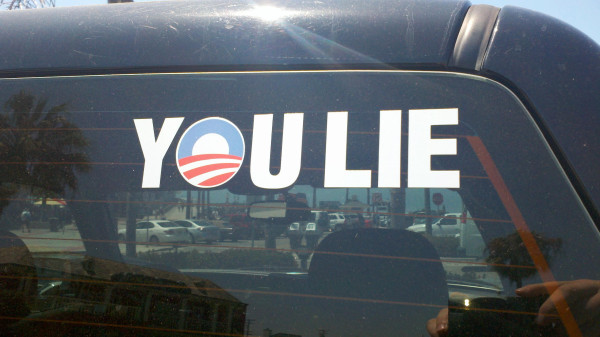 No graphic/pic visible from here…

I was surprised to see a 2012 sticker with the 0 being the Obama logo and crossed out, here in Salem, Oregon the other day. It was in one of the conservative sections of town though.

We’ll be in Ithaca on Sunday to see movie 2016 Obama’s America and I’m taking my camera. Corning has so few bumper stickers, so we’re hoping to see a few in Ithaca.

Oops… I’m not a twitter person but now see the link.

Good to see that there is insurrection in crazy CA!

Just curious, but has anyone heard of or have first hand knowledge of cars with anti-Obama or Romney/Ryan stickers being “keyed” or otherwise vandalized?
I usually put the bumper stickers on my car a month before the election. Several years ago, a Republican Governor [Bob Ehrlich] was running for re-election. His democrat opponent was Martin O’Malley, former Mayor of Baltimore. Three months out from the election, someone stole my lawn sign. I do live in a mostly democrat neighborhood. I replaced the sign, but moved it father back from the road.
O’Malley won with ads that accused Ehrlich of raising taxes by calling them “fees” [Note: the democrats have controlled both the House of Delegates and State Senate for so long that no one alive today can tell you when there was a Republican majority]. Since he won, O”Malley and his super majority in the democrat legislature have raised taxes and fees without a peep from the Republicans.
There really is no viable Republican party in Maryland, although Dan Bongino is running for a Senate seat held by Ben Cardin who has been at the public trough for 45 years.

I see more and more every day. (I haven’t sent any lately; maybe later today.)

But then I keep hearing from people (who watch waaaay too much TV) that they “feel” like Obama is going to win this election. That Romney is “gaffe-prone.” And then I try to expose them to reality…….like slogging through mud. They haven’t seen Biden’s gaffes 24/7 repeat-looped on ALL the airwaves; they haven’t heard the whack-job leftist radicals wanting to destroy America because of “evil rich people” or something.

They go on about how upset they are, or how bad things are, or who will follow Obama in 2016, because they don’t trust either party. Ryan’s an extremist, dontcha know, and Romney is NOT appealing….and, “….just who are the Republicans to tell MO who to have as their Senate nominee?!?” they say.

This has been a depressing week. Thanks for lifting my spirits!! I needed this one. 🙂

As Glenn Reynolds would say, “another rube self-identifies.”

Here in Tucson, there were lots of Obama stickers on cars in 2008. I noticed they started disappearing in late 2009, and by mid 2010, it was rare to see one.

Lately, the only bumper stickers I’ve been seeing with the Obama logo are the ones that say “Gone (January 2013)” and have the Obama logo in the “o” part of “Gone.”

Even the libs here are sick of the guy.

The day after the 2008 election, we saw an “Obama Must Go” bumper sticker in Ithaca.

Is it me, or does it seem like we are getting plenty of anti-Obama bumper stickers spotted on vehicles in hostile territory?

Judging by some of my less successful friends from college (the ones that never got married or found a serious career path, but did find plenty of reefer) I think the growing hipster movement is dislike not just Obama, but politics in general. These same people that are singing the praises of OWS, are disparaging Romney and Obama in equal volumes. I think that most of these people are either not going to vote this year, or throw away their vote with Ron Paul. Luckily for Romney, these voters would not have voted for him anyway. Unfortunately for Obama, these voters DID vote for him in 2008. Just my 2 cents, based on what I’m seeing on social media and such.

Oops, the sub-quoted part was my comment. Messed up those quotes.

Newport Beach is part of Orance County which is more conservative than the surrounding area.

Still, anytime you put a conservative bumper sticker on your car in California you run the risk of incurring vandalism.

Every time I put a Republican/conservative sticker on my car it was vandalized. I only use magnetic stickers now that can be easily removed.

Most ironic was when one of the few Republicans here in the Peeps Republic of Santa Monica had his Bob Dole yard signs spraypainted with swastikas.

Yeah, Bob Dole, Nazi. Tell us why you nearly died, Bob, and why you can’t use your right arm.

Isn’t it amazing that the one side that preaches tolerance cannot tolerate anything that they do not agree with?

I think that they will get a resounding message on Eviction Day that the rest of us no longer wish to tolerate them.

Send the mobsters back to Chicago!