Is that anatomically possible?

Is that anatomically possible?

Saw this not far from my home in Rhode Island.

Not really sure what to make of it.

I can think of a few possibilities. 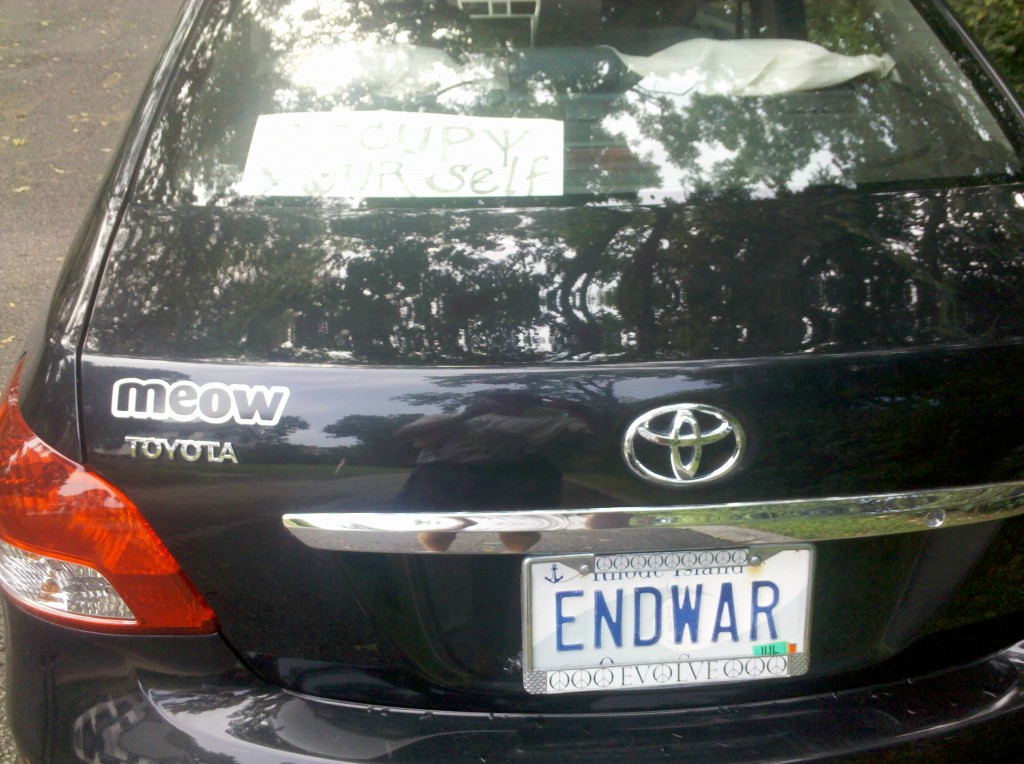 and how does that fit with the endwar meme license plate?
seems to me it would be a long and penetrating war….

If you’re the one you’ve been waiting for…

why the heck not occupy yourself?

Think of the hours of interesting, tense dialog, making you feel more “purposeful”. I bet Adam Smith wishes he’d thought to do this, after making himself a nice tuna sandwich.

You know what happened to Kwai Chang Caine when he did that.

Not quite the same as Express Yourself.

That “Meow” says the car own has predatory instincts. That’s what “Occupy Yourself” says, too. Some folks put vid cams on cats and discovered their cats are major killers. They whack everything. Just like the Occupy folks.

That sums up the “me” generation to a tee. I wonder what they do when they’re bored with themselves.

And yet, the car appears both washed and waxed. Perhaps the interior is filled with garbage and vermin-infested … ?

Nah, they borrowed it from Mommy and Daddy

The vast majority of the OccupySpace Cadets showed themselves to be totally self-centered, sterling (if tarnished) examples of the “me” entitled generation. They seem to conform to the old saying of “his head appears to serve no other purpose than to keep his ears apart.”

—Sorry, but I’m a big fan of showering myself.

We shouldn’t discourage this car owner from doing just that. How else would one this simple-minded “occupy” one’s time? There’s certainly no constructive occupation suitable for an individual with this obvious lack of ambition and character – unless one doesn’t care about the well-being of any customers concerned.

You know who else likely subscribes to this sentiment?

Republican Bob Dole … who nearly lost his life and lost the use of his right arm fighting those who would have “CONTINUEDWAR.”

Republican George H.W. Bush … who was shot down over Chichi-jima, resulting in the death of his two friends and crewmates, fighting those who were beheading (and eating) American POWs in a life-and-death struggle against those who would “CONTINUEWAR.”

Republican John McCain … who refused early release as a POW, in solidarity with his fellow POWs, and who withstood torture, in a struggle against those who would “CONTINUEWAR.”

But you, Sir, have the courage of a license plate.

Is it anatomically possible?

While they oppose war, they support extralegal justice. They must be anarchists or, if the second bumper sticker is to be taken literally, masochists. Either way, it represents an unpleasant lifestyle.

Makes as much sense as anything else put out there by the occutards.

What is this — a cynical libertarian peacenik?

“Occupy Yourself” = what happens when your head is shoved up your “bill-maher.”