I’ve always told my kids that any vehicle sporting more than 3 bumper stickers is probably owned by a “wacko”.

Here are a couple of photos of such a car that I spotted this morning in Santa Fe, NM.

I note that I regard Santa Fe as similar to Berkeley, except without the intelligent life forms. 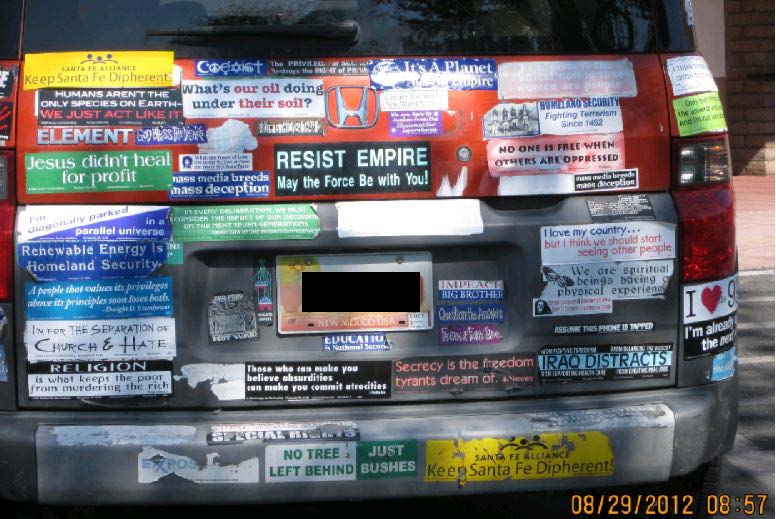 I had never watched a RNC convention before, as a recovering dems I only ever watched the DNC conventions. I watched pretty much most of the RNC convention this year and I must say I was very impressed, there was no anger, no yelling about one set of people against another. It was pretty positive and optimistic, a real “Yes, we can”

This will be the first year I will not be watching the DNC convention, I have no clue whats happened to that party I used to be a member of for decades. Way too angry, way too divisive, way too much race baiting, way too much going after the “1%”, which according to dems is anyone who works apparently.

Nope not watching the DNC convention this time around. Thought the RNC convention was pretty good, most of the speakers I enjoyed listening to and was inspired by them.

As a recovering Democrat myself, I welcome you!

And, in the immortal words of Victor Laszlo in Casablanca, “Welcome back to the fight. This time I know our side will win.”

I hope that last part is prescient, as well!! 😉

Congratulations for being on the road to recovery!

A cautionary word: The Republican Party will disappoint you from time to time. Lately it’s disappointed a number of us often. Don’t worry about the party. Be concerned with the candidates. Find the ideas you support, and then find the candidates who best support those ideas. As you know, there will never be a perfect candidate, and the candidates you like will not always be nominated. But don’t give up. Challenge your ideas by talking to others about their ideas. You might surprise yourself.

And consider the Democratic Party; what they stand for, the ideas they support, the candidates they run. Challenge yourself. Where do they stand during a given election in comparison to you? If you’re given the opportunity to vote in a Democrat primary and there is a choice between a candidate who is clearly closer to your ideas than the other candidate, support the nomination of the Democrat closer to you (even if it’s not as close as you’d like). You can affect the Democratic Party even if you don’t generally support them.

Duct tape can fix anything! 😉

So many bumper stickers – where to begin?

“I’m for the separation of Church & Hate” – Reminds me of the “hate is not a family value,” and just as stupid.

“I love my country, but I think we should start seeing other people” – Hey, knock yourself out. Go to North Korea; they’ve got plenty of room, and you can even get some free re-education, although with winter around the corner, it’s not as nice as Cuba.

Understand that the Left-wing bumper sticker industry is the place where those folks who spent, or borrowed and spent, 300K for a degree in Mesoamerican Folk Tales or Klingon Language Studies both use their skill sets and vent their collective spleens.

I also note the irony of this “display” on a Honda Elephant.

When I helped one of my daughters shop for a car a few years back, I was impressed with what crappy mileage the Elephant got.

I think my favorite one is the black-and-white one just below the license plate, just to the left:

Those who make you believe absurdities can make you commit atrocities.

Sums up the leftists/Dems quite well. (And all other statist tyrants, of course.)

Template dem. All sticker. No bumper.

The irony is that some of these bumper sicker slogans apply in an even greater degree to the Obama administration. (e.g. ‘Impeach Big Brother’, ‘Secrecy is the Freedom Tyrants Dream of’, etc.)

Conspicuously missing is a pair of Obama-Biden bumper stickers for 2008 and 2012.

Perhaps the liberal duo is just too conservative to command a place at the bumper sticker table on that particular van.

I like the one that says “What’s our oil doing under their soil?” Does he realize that we are paying for the oil not stealing it from oil producing countries? Additionally, I don’t think this person approves using the oil under our soil or under our coastal waters for environmental reasons.

In our move last year from the Boston area to the Phoenix area traveling down Interstate 10, we drove across New Mexico and took in some of the local flavor.

What we witnessed was a kind of off-the-grid 60’s hippie-enclave mentality… the disconnected yang of the San Francisco liberal on-the-grid ying.

New Mexico may seem a bit odd but with the exception of a couple of counties, it’s not as reliably blue as people seem to believe. Personally, I like the oddness. The do-your-own-thing mentality allows my husband and I to build a dome home (off the grid) with a stunning view of the Sangre de Cristo mountains.

What sort of pathology accounts for something like this?

Why would anyone deface their vehicle in such a manner? I don’t mean so much the messages as the act of plastering the back of one’s car with oversized stickers. (Though I suspect the messages are part of the pathology.)

It must be some form of outburst stemming from some sense of anxiety or psychic (in the psyche sense) repression. What is that?

“Utopia the Beautiful” is such an uplifting song.