It seems to me that Barack Obama and many Congressional Democrats could learn a valuable lesson from little Veruca Salt.

Listening to all of Veruca’s demands is like reading through the dismal 2013 Obama budget, line by line. (Recall that his budget failed by a margin of 0-414 in the House)

Having added over $5 trillion to the national debt in less than one term, its clear that President Obama adopted the Veruca Salt spending plan for the country. He should just come clean with the voters and be honest. In fact, I’ve already got his first campaign ad ready to go. 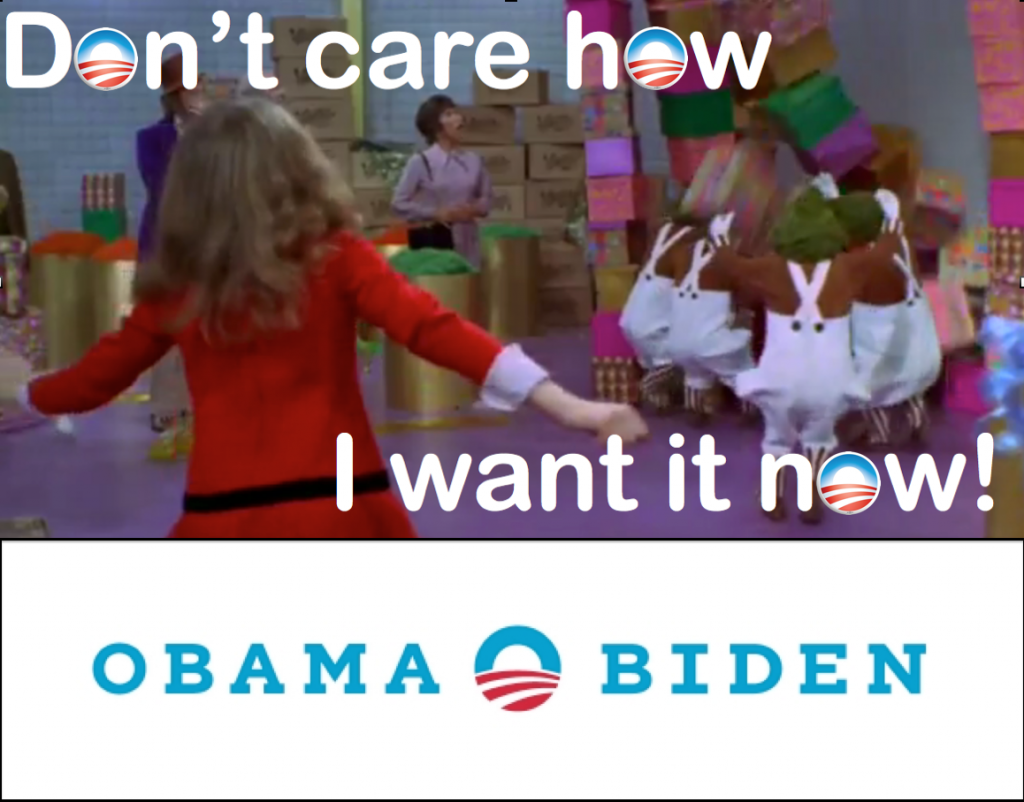 I think the hard working Oompa-Loompas attempting to stop the tower of boxes from falling over in the wake of Veruca’s destruction offers a particularly accurate analogy.

Don’t worry, I’m probably not even going to charge him anything for it. I know how he likes free stuff.

I already have a copyright on the future LI TV talk show title:

I keep thinking of two of Hunter S. Thompson’s quotes:

For every moment of triumph, for every instance of beauty, many souls must be trampled. [Doesn’t this sound like the essence of Liberalism?]

I hate to advocate drugs, alcohol, violence, or insanity to anyone, but they’ve always worked for me.

[Only it should be rewritten to be “theft, perjury, violence and corruption”]

Classic marketing. Nailed it. This needs to become a rear window sticker. Are the graphic rights assignable?

It’s brilliant. I love it.

Would be appropriate to merely say this: “Please, carry on!”

Nah, i think the real meme from the campaign this year is more along the lines of “no no no, 1+1-1 is how the government grows the economy. Math really is hard….”

Veruca Salt = the product of a self-serving, out-of-control, union-based cabal of socialist indoctrinators (what used to be jokingly called “teachers”) who have made a leftist propaganda mockery of the education process, while grabbing their humongous taxpayer-funded salaries and gold-plated benefits that are bankrupting cities and states and helping finance the d-cRAT socialist party by laundering their taxpayer-funded salary via dues to their leftist union.

I gotta tell ya… If the balance of takers as opposed to providers goes over 50%, We’re done! A one party sorry state of affairs awaits.

I like your ad idea prof BUT, it might backfire as most of the public that would view it might make the wrong interpretation with a result to flies being attracted to a stinkin’ pile of dawg doo-doo..