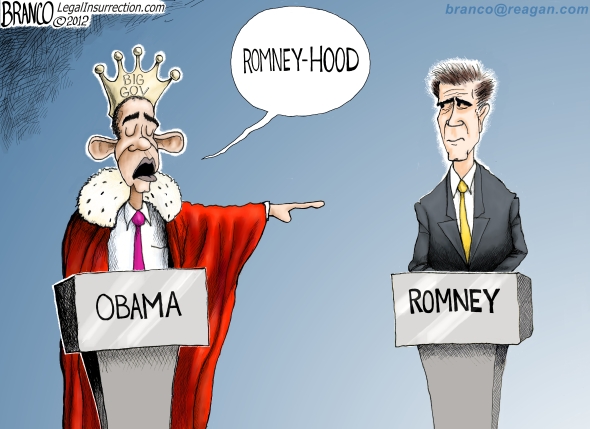 Branco’s Facebook page is Freedom’s Battle, and you may make a donation to him at his website.

Romney’s response was to refer to “Obamaloney”. Of course, it is Romney who is getting ripped a new one for supposedly “introducing” that line of attack into the race – never mind that it was a response.

That cartoon is completely wrong. Obama should be naked in it. He is de emperor.

Good cartoon. But I’d have added money or gold coins falling out of his pockets.

I thought that he was the sheriff of Nutingham.

Stilton Jarlsberg has been toiling for almost 4 years in his relentless attempts to mock President Obama & he writes spot-on commentaries too. Very prolific, used to do a comic 7 days a week, now does 3 days a week, and will add some if events warrant. Doesn’t do it for money either, no ads, no tip requests. Just an Amazon Portal – he did do a Kindle book – “The Obama Sutra – 57 States of Ectasy”.

He has been the best antidote to the likes of Bill Maher, Keith Olberman (whatever happened to him), Rachel Madow, et al.

A missed opportunity! Should have had a HUGE bloodied staff in Obama’s other hand labeled “Tax, Spend, Regulate & Bureaucracies”

HRH Obama’s crowning achievements: 104 rounds of golf in less than four years, sky-rocketing debt, massive unemployment, the trashing of our national sovereignty, the promotion of injustice, dashed hope and destructive change – all in one term.

I find it most appropriate on a number of points:

Obama does act monarch-like, with his exec orders, czars, etc.

Obama, or one of his team, makes an accusation and Romney says nothing

Obama has the “trappings” of office, while Romney comes across as one those “suits” responsible for the condition of this country.

Maybe not to the same extent as 2008, but the “ball game” is nearly over. Between Obama, Clinton, and Obama’s team, they’ll play a “shell game” that team Romney won’t know who said what and even when they do respond, there will be a denial that one of the others must have said that.

They’ll pound, pound, pound away with the themes we’ve already heard, as well as others like them. Meanwhile, Romney and team will continue as they have, so it won’t be pretty at all. With the willing cooperation of the MSM, the team Obama message will be so massaged that many people will have sufficient doubt about why they ought to make a change.

Best we can do is to concentrate on Congressional, state, and local elections. Four more years of BO is on the way ‘cause there’s not a deodorant strong enough to eliminate it.

Ozymandias-on-the-Potomac, auditioning for an upcoming performance of “The King and I” wherein our Narcissist-in-Chief will pull off a tour-de-force and, MPD-style, star in BOTH leading roles at once.

After all, in HIS universe “L’etat, c’est moi!”

The message is in both face’s folks.

You may remember: The Sheriff of Nottingham (played by Barack Obama) is TAXING THE SUFFERING PEOPLE TO DEATH, so Robin Hood (played by Mitt Romney) DOES JUSTICE FOR THE PEOPLE by PUTTING AN END TO IT. “Letting” People keep more of what they EARN.