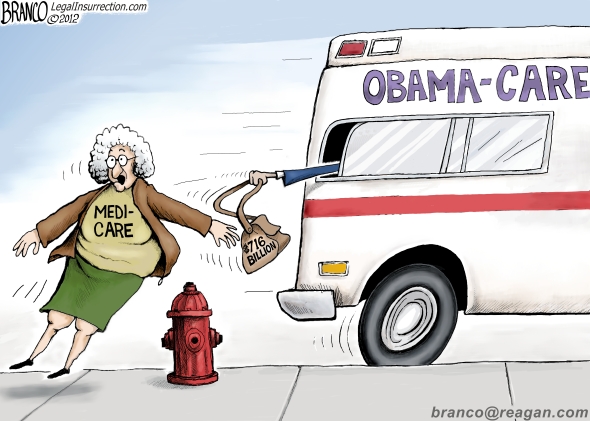 […] they’re accusing Ryan and Romney of proposing. The real threat to today’s seniors is nicely illustrated in this excellent cartoon. Share this:FacebookTwitterLike this:LikeBe the first to like this. This entry was posted in […]

This cartoonist is really, really good!

Thanks for bringing him aboard. 🙂

I would be pleasantly surprised if there was $700 billion sitting around to actually steal.

Hey, Obama has to find money somewhere to pay for all the subsidized health insurance that millions of new “dreamers” (formerly illegal aliens) will now be entitled to claim, as legal residents of the U.S.

More than twelve thousand illegal aliens showed up today at a free legal clinic in Chicago, to get help applying for Obama’s new Imperial Executive Amnesty. That’s just the number in one section of one city. Nobody knows how many nationwide will be applying, and of course, Obama’s Imperial Amnesty has no limits on the number of illegal aliens who can receive amnesty. Also, Janet Napolitano said on CNN a few weeks ago that ICE already has plans to give amnesty to the family members of the “kids” who receive amnesty under Obama’s plan — so that’s millions more illegal aliens who’ll get amnesty.

All those Obamacare subsidies for all these new “legal” residents have to be paid for somehow. What better way than to take the money out of Medicare? Barry’s just re-distributing the wealth of evil Americans to more deserving Third Worlders — all in the interests of “fairness” (as defined by Alinsky-trained Marxists radicals).

I am fantasizing about sending out the “Ryan, is that you?” cartoon as a greeting card to retired Democrats. Please consider a sideline!

In this case, it’s not “Throw Mama From the Train”. Rather, it’s Throw Mama Under the Train!