To make it perfectly clear to those of you who want to keep more than a hunk of your money, who think you are successful because you are smarter or worked harder, who think you built that business,

but don’t think that just because you pay 70% of income taxes that you have paid off your debt of gratitude to the government.

And remember to say Thank You. 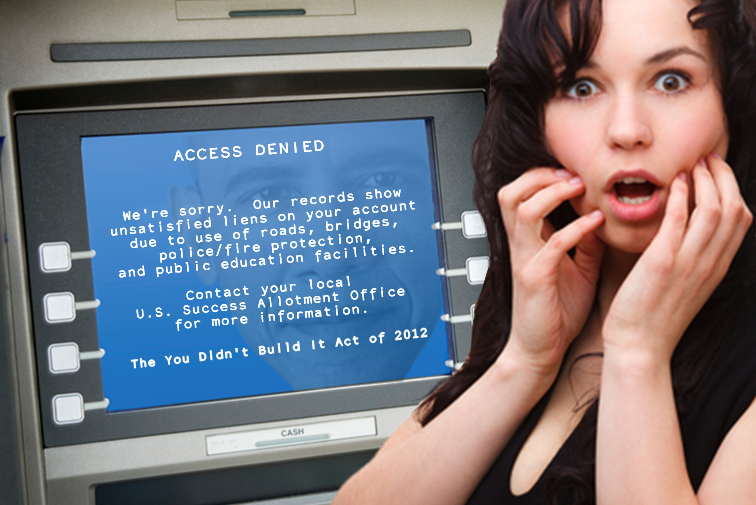 Thanks to reader Patricia for the image and idea.

As has been said in other places: For the left “Atlas Shrugged” is less of a prophecy and more of a “how to” manual.

And we await the arrival of Ragnar!

Or at least John Galt to take over the airwaves and tell everyone how to fix this mess.

Excellent! (spoken in the fashion of Mr. Burns on The Simpsons)

That Obamic statement has been ratified by Dizzy Lizzy Warren.

Without RESERVATIONS, to paraphrase Jim Geraghty.

The point being that everybody KNOWS this is what Obama MEANT, this is what he believes, and this is how he FEELS. It is how he was raised, and all he knows. And he has fully embraced it, as we can see from the destruction left in the wake of this regime.

I think the talk back walk back is to con the sheeple who think Dear Leader is just a victim of the White racist conspiracy.
There is no context for it to be taken from- he meant it and Running Bare confirmed it.

See you next week in Spring,Rags!

If you haven’t seen it, look up the Krauthammer take on this during the panel the other day on Fox.

He was as close to giddy as I’ve ever seen him. He had Bret guffawing!

The way of the Founders/Framers, or the way of the EU/USSR/UN model? There’s no middle road. The idea of centralism was always a false premise. Moving toward a “compromising center” always means abandoning your founding principles. And you will note that all “compromise” moves in one direction only, toward that of more government.

Do we want freedom FROM government via limited, constitutional government whereby government itself is bound by law, or do we want total government. There is no middle position. Madison (Fed. 51) put it this way, “If men were angels, no government would be necessary. If angels were to govern men, neither external nor internal controls on government would be necessary. In framing a government which is to be administered by men over men, the great difficulty lies in this: you must first enable the government to control the governed; and in the next place oblige it to control itself. A dependence on the people is, no doubt, the primary control on the government; but experience has taught mankind the necessity of auxiliary precautions.”

Rather than government being dependent on the people, as Madison et alia had hoped, today we witness Obama and his crowd of leftists inverting the Framers’ ideal to the point that the people, and as many as possible, must be made dependent on the government which will then go after the producers (“tax the rich” is their shibboleth) with a vengeance, a taste of which has been given to us beginning on 01/20/09.

A great deal hangs on this election. If BO is re-elected, he will take that as America’s answer to the Which Way question.

Controlling how history is “taught” has been rewarding to the Left. A people that forgets how it arrived at its present station in life is quite likely to lose the skills necessary to sustain that station. The ever-expanding welfare class, dependent on others for their living, is evidence that America is forgetting.

From our perspective “public” education is an utter disaster. But for the Left having captured lots of cultural institutions, with public schooling being one of the most critical, has allowed it and its government-dependent, rabid minions to control the discourse. Do you remember how rabid the Wisconsin public employee unions behaved in their outbursts of 2011-2012, with the teachers especially so?

Of course they both meant it. Whats worse alot of people educated in their system agree. The disseminators of much of the news and entertainment agree. Many of the recipiants of govt largess agree. Even worse ,whatever the :percent of business reliant on govt subsidies ,contracts etc. agree. To most of these people because of their situation it is self evident. This mindset is implicit in the type of nation we have been developing into for decades.

That illustration is perfect: Step one: Convince the business class they indeed have the same as “original sin” so far as government is concerned. Step Two: Enact tax policy as illustrated as a means of making good to the society from who they have taken so much.
Thanks Obama.

And as for questioning anyone’s ‘success allotment’, let us start with our Dear Leader, who’s vastly overdrawn his own account. Let him pay penance, and go work for a living for a couple of decades producing goods that people will voluntarily buy and use to make their own lives better. Not services – he’s ‘serviced’ far more folks than his allotment allows, already.

Obama plays along with the unions and liberals and Marxists, but the “anti-colonialist” attitudes seem to run deepest. He wants to redistribute wealth and success away from successful (and wealthy) Americans.

I’d guess what Obama really wanted to says was “If you built a successful company, good for you, now my unions and liberal politicians will seize it. All your companies are belong to us.”

Obama seems to really believe the American success story is built by impoverishing the rest of the world, as well as by using an unfair share (supposedly) government supplied infrastructure and workers. He doesn’t understand builders as the hardest working or smartest, but as the slave master with a whip, in the slave ship.

But there is a grain of truth … these days, you don’t build a corporation just with smarts and hard work, you buy a lobbyist in DC AND grease all the local gentry. The successful now use government to suppress their competition, and pass laws that require more of their services.

If you build it, they will come … to seize control of it.

But what do I know? I needed that jackass to make me successful. The hell with him and the horse he came in on.

Greece has the same problem … many just don’t bother to pay any taxes, or some that do have two sets of books. Where is John Galt? I think he retired early in Costa Rica.

The variation I’ve seen on the “You Didn’t Build It Act” is:

If it succeeds, tax it.
If it continues to succeed, regulate it.
If success continues still, demonize it.

0bama’s twisted view of prosperity is reflected in his oft repeated admonition that the U.S. “consumes” 25% of the world’s resources, as though we produce nothing. He makes it sound like we have a huge National Bonfire where those precious global resources are merely reduced to ashes.

And, the concept of “wealth creation”? I doubt it could be explained to him…

Obama and his ilk are all about Creation of Welsh

Combined with President Obama’s initiatives for promoting advanced manufacturing technologies in the civilian sector, DARPA’s initiative could help speed the development of cutting-edge systems that enable the U.S. manufacturing sector to leap into a new generation.

DARPA’s new Adaptive Vehicle Make program has just teamed up with TechShop, a maker-friendly chain of shared workshops, to collaborate on a test bed for developing advanced new manufacturing technologies.

Ahhhhh… so is this a joke? If it is, please say so, otherwise some Lefty will move forward with it!

Obama is so progressive he is regressive. His philosophy subordinates the individual to the collective.

“The government’s view of the economy could be summed up in a few short phrases: If it moves, tax it. If it keeps moving, regulate it. And if it stops moving, subsidize it.”