From reader Bill in Texas:

I continue to be an avid reader of your blog. Congratulations on its continued, spectacular growth!

One day after Obama shows up in Austin searching for cash from people who didn’t build their own businesses, this appears on the road.

If you look closely, one of the bumper stickers says Klaatu Barack Obama, a reference to a phrase spoken in the original The Day the Earth Stood Still movie, “Klaatu barada nikto”. Klaatu is a space alien. Apparently, this was considered a good thing during the 2008 campaign. Somehow, it all makes sense.

BTW, I swear I took the pic when the lights were red. They turned green as the pic was taken. I swear. 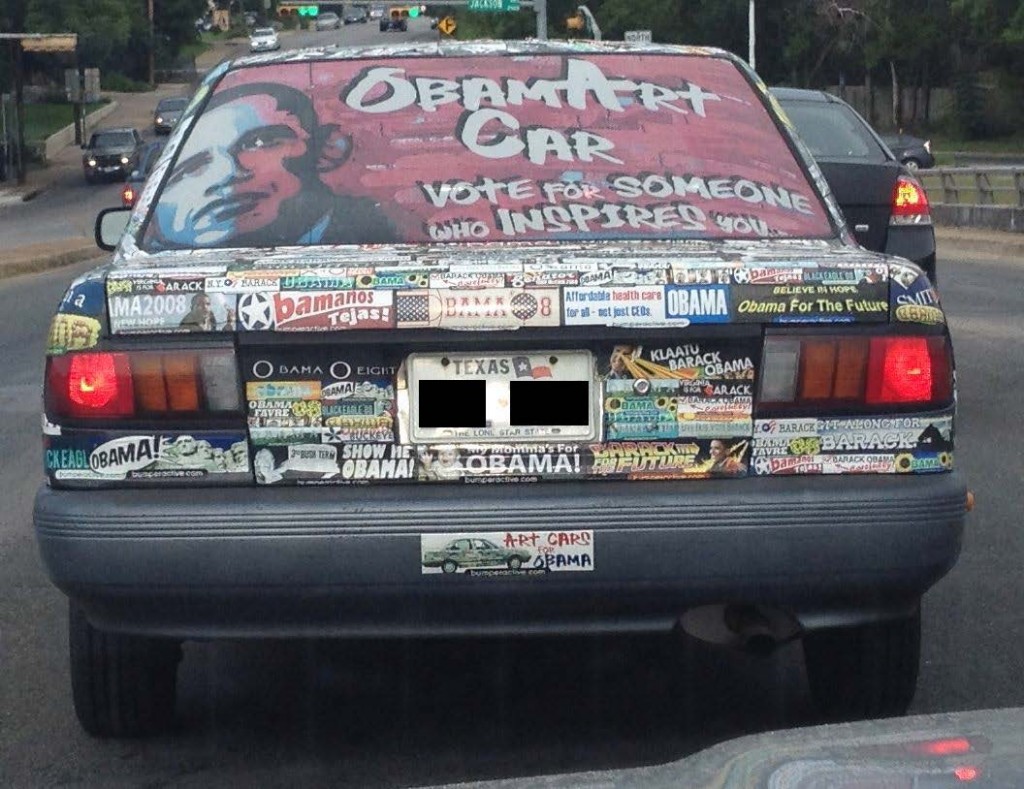 Obots, who’s entire being revolves around childish rejection of facts, logic and reason…

Gaah what would we do without them, recycling the worlds refuse of ideas, even implying they’re WTF? investments… while its only function to the rest of society is keeping us mildly amused.

Buried in that clutter I assume there is one of those inane “I am (a/n ……), I vote” stickers. In this case, “an Artist”.

You say you invented the RPG? You didn’t. Somebody in an “art” car did that for you.

Austin, TX was deeply affected, when the Charles Whitman massacre occurred. It still suffers, as it seems.

Those death rays coming from Obama’s eyes are directed at success. Collectivist aliens fear and hate individuals who succeed outside government’s mother ship.

I’d like to be stuck in an elevator with the driver of this car. I would tell him where he could put him some Obama and it won’t be his car’s rear end. (Just sayin’it the Chicago way.)

You’ve got it, OcTEApi. As I have remarked before, you almost always see the car covered with stickers expressing a liberal theme. No one can possibly read those in traffic, nor should anyone try. The purpose is to declare yourself to the world as a morally superior person.

By the way, I don’t know about Texas but in Michigan I think it’s illegal to have your rear window covered so you can’t see anything. But I see that among the driver’s many boasts of goodness, “safe driving” isn’t one.

naw, as long as you have side mirrors they usually won’t bother you about rear glass… in fact, that’s were most stickers are found.
In Michigan where there’s large car culture its like a cardinal sin to put stickers on your vehicles paint.

Only rarely do you even see the obligatory union knucklehead bumper sticker that say’s “out of a job yet, keep buying foreign” or a variation like “where will your kids work.”

“safe driving” … if the speed limit is 70 you can safely drive 85 cuz the cops are pulling over people driving 100.

I’m thinking the driver is on the payroll of the Obama Victory Fund.

I’m guessing Austin or Houston. Houston is favored because “art cars” are a big deal there.

Irregardless, my breakfast has been ruined…

ONLY in Austin, the bluest county in Texas and the home of effin’ UT. 😀

Art cars in Houston are funny, weird and insane.

Check this one out…

I used to work for a company that bought and sold used IT equipment, we bought out large and small company’s stuff, whether they upgraded, went bankrupt etc.
To put it mildly there was a lot, a real lot of chaff, I made this guy’s project happen while pushing all the junk aside… he sent me a picture of a 15-20 foot high pile of now HIS chaff -lol

Somebody is liable to jack it for the copper, though!

The bumper sticker that would explain the “art” car for Obama is the one most seen in Austin:

But even in Austin (the San Francisco of the Southwest) I see a lot fewer Obama stickers this year than I did in ’08.

That is not a good sign for the man who props he feet up on the Resolution Desk.

Heh… That, “Keep Austin Weird,” bumpers sticker is sure reflective of the majority of occupants of this city. Start with the city council and carry on from there.

I’ve been here for nearly twenty-two years and still am surprised with some of the stuff they come up with.

Austin gave up weird for yuppie pond scum a long time ago. That was about the time they tore down the original Armadillo World HQ. Now, the original heart of “weirdness,” SoCo (South Congress), is no longer an aggregation of strange co-ops, ‘head shops,’ assorted kitsch and other random and not-easily-defined places. No, it’s all trendy boutiques, Name Brands, faux weirdness and Yuppie imitations of the Sixties. And all for a hefty price.

Check out the FB page for the Obama Car Art Contest: http://www.facebook.com/pages/Obama-Car-Art-Contest/31490457280

But you get an A+ on this post title.

The only thing Obama has inspired me to do is to send money to Republican candidates.