Still, they taunt me

Still, they taunt me

I know I shouldn’t take these sort of things personally.

But really, must they taunt me? 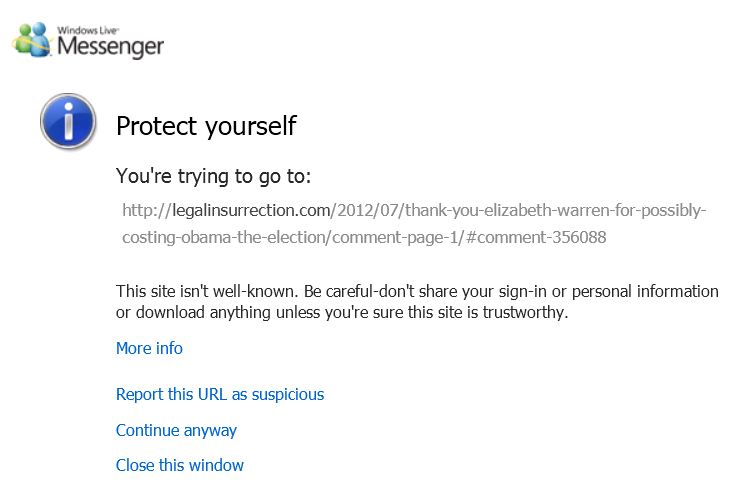 In case you missed it:

That is just mean.

I haven’t used Messenger since it used to be called MSN Messenger…hmmmmm…..
Does anybody but pre-teens use those old chat programs any longer?

Honeybadger son’t give a sh*tl about Windows Messenger. I see your LI site linked by every major Conservative blogger.

But Windows Messengers is just pointing out the truth: Bill Jacobson didn’t build this, somebody else made it happen. There are smarter people out there.

What is this place, anyway?

I knew I should have taken a left at Albuquerque.

I’m confused. Now we have to protect ourselves?

Obviously some sort of dastardly trick! If they don’t like Legal Insurrection, I suggest that they just:

You have downloads? I’m missing out! 🙁

Sure, but theys in the protected files area…

Consider it not as a taunt but as a compliment. Knowledge is power and in the wrong hands can be dangerous.

As long as the insurrection is legal, and substantiated, you will be just fine.

The bad news is that the lunatic-left is now aware of Legal Insurrection. I suggest that the moderators be vigilant for the hate-filled, flaming, abusive, verbally violent, disrespectful, profane and uncivil comments that the site will likely now get from the loonies.

Remember a key tenet of d-cRAT socialism is “Free speech for ME, but NOT for thee.”

As they say, you can tell you’re over the target when you start to cach flak.

As of the moment I’m posting this, your site is rated 37,661 worldwide on Alexa.

By the way, microsoft who?

It’s funny that in specifics, the comment that is tied to is the quote from Atlas Shrugged:

“He didn’t invent iron ore and blast furnaces, did he?”

She said, puzzled, “But the iron ore and all those other things were there all the time. Why didn’t anybody else make that Metal, but Mr. Rearden did?”

The purpose of patents is found in the US Constitution, Article 1, Section 8:

To promote the Progress of Science and useful Arts, by securing for limited Times to Authors and Inventors the exclusive Right to their respective Writings and Discoveries;

Patents to inventions were a unique contribution by Americans to the field of law. Before that, patents were simple monopolies in anything (land, the right to sell chocolate) to any favorite of the local ruler.

Ayn Rand, a Russian, understood that communists utterly failed to grasp the significance of American patent law, because they disrespect individual initiative.

It’s OK, I have protection.

wish my site even did that to people.
hell I need members.
darn that sounds bad LOL 🙂

Government hasn’t yet got around to telling the serfs that you are around, Wm. solution: call the WH, find out which government office is responsible for increasing website popularity, fill out the requisite forms, pay the requisite fees–after standing in line to be snarked at by the requisite semi-literate government employee, pay the necessary bribes (you might buy the $3 Obama raffle ticket for something or other), then wait the requisite unspecified amount of time for the government to increase your readership. Remember, Wm, you didn’t build this site!

If you have protection installed to guard against malware, viruses and spyware and keep it updated then you really don’t need any nanny-state identity and web protection to inform you of potentially malicious sites.

I’m sure there is a way to disable the WLM smartscreen.

Ironically, these major corporations have now become the largest plunderers of your personal info, collecting your information is now built into their business model.

Since it came out, one thing I’ve always done is to disable Windows Messenger.

I don’t know about now but it used to be full of security flaws and a back door for all kinds of bad things happening to one’s computer.

This is a known known. Disable your WM NOW.

I don’t use any chat programs.
In fact, there’s VB script that I use that rips messenger out of windows OS completely.

Don’t forget the rest of Khan’s quote……..”Revenge is a dish……best served cold”

I never visit this site without carrying a gun.

Professor, I always wear a condom when I visit here. I practice safe internet.