One of the best July 4ths I’ve had in a while.

I feel a sea change, after the bummer of last week.  The media did its best to demoralize us, and we did a pretty good job on ourselves as well.

I’m reinvigorated, and more motivated than ever.

Having some of this homemade (including the frosting) cake prepared by my neighbor helped: 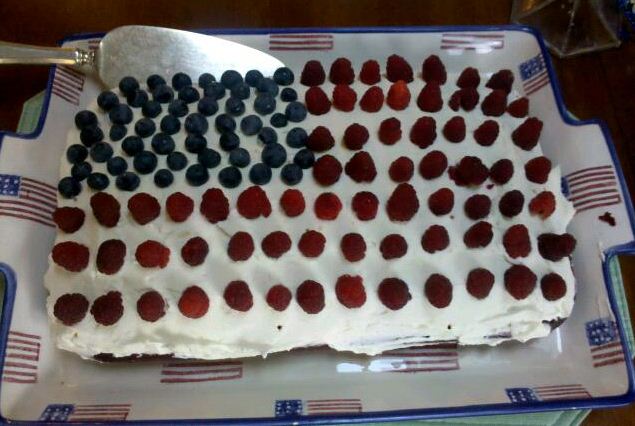 Posting a pic is having it. Now go eat it, too!

A patriotic cake and icing made from scratch! Perfect for every occasion!!

Thanks for sharing the photo.

Professor, God bless you for all you do in the cause of individual liberty and freedom and thanks for providing a “home” for patriots across the nation.

Love the cake and the fireworks were a pleasant surprise. With an 11 month old, they are the only ones we are seeing this year. Thank you, Professor. And happy Independence Day everyone!

I agree – there is a sea change. Even Romney made the correct assessment (as you noted in the prior post).

Bless you and your family!!

Yep. Hurray for the Red, White, and Blue.

May Old Glory wave forever and a day!

Love your choice of music and fireworks too.

I can’t hear the music. What songs is the Professor playing?

“The assumption of natural rights expressed in the Declaration of Independence can be summed up by the following proposition: “first comes rights, then comes government.” According to this view:

(1) the rights of individuals do not originate with any government, but preexist its formation;

(2) The protection of these rights is the first duty of government; and

(3) Even after government is formed, these rights provide a standard by which its performance is measured and, in extreme cases, its systemic failure to protect rights — or its systematice violation of rights — can justify its alteration or abolition;

(4) At least some of these rights are so fundamental that they are “inalienable,” meaning they are so intimately connected to one’s nature as a human being that they cannot be transferred to another even if one consents to do so.

This is powerful stuff.”

Posted in part at Volokh:

Today is a day when I remember how my parents were immigrants, as were theirs, and that my siblings and I are the first American generation of our family. My father, now deceased, spoke of being teased and bullied for his funny accent on the streets and in the schoolyard of 1930s Detroit, but enlisted in the USMC in 1942 at age 17, served in the Pacific, then returned for a lifer career as a Detroit police officer.

I could – and might – write a book someday on our eleven annual reunion trips to Charleston harbor, where the ship he served on, the USS Yorktown, is moored, where I was privileged to try to chaperone two dozen crazy old Marines who nonetheless still managed to outdrink, outyell, and outfight a thousand sailors there for the same reunions.

I have been to Patriot’s Point and spent hours climbing through the ships there. Yorktown is an amazing ship. Laffey is as well. I found I could not fit in the gunner’s seat in the 5 inch main armaments. Of course, I could barely fit in the turret of an M2 Bradley as well.

Thank God for men like our fathers who sacrificially defended our freedoms against tyranny.

It is ironic that our liberties are again threatened by tyrants who have infiltrated our own centers of government.

We do the cake too but use strawberries and blueberries for the decorations.

Happy Independence Day to everyone!

Professor Jacobon, you are an M-80 every day. Some days you are a box of Excalibur mortars. Thanks.

Yes last week was a major bummer.
I am finally feeling a little better after today.
Resolved to make it through the next few months.
Happy 4th to you and your family.
God Bless America.
America Bless God.

Thank you Professor Jacobson for shedding light on the disappointing errors of the Court. Onward toward November 2012!

You’re indefatigable, Jacobson. Glad you’re on the Right side.