I’ve got it: The “Hot and Burning” program

I’ve got it: The “Hot and Burning” program

At which point you say, “please don’t give them any ideas.”

A second photo taken by Ryan on his drive outside Kansas City:

The trailer is located on highway 71 south of Kansas City, MO.

Some enterprising American decided to park a semi trailer in his field and use it as a billboard.

As you can see, someone disagreed with the message and attempted to silence him…though I’m not surprised that a liberal failed at something as simple as starting a fire.

Perhaps he can find a government program that will help him be more efficient at arson? 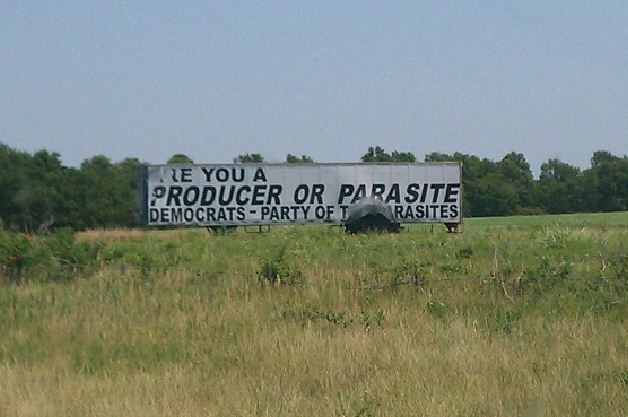 Someone commented that it had burned up last fall. I actually took that pic last summer, though I do not remember ever seeing it destroyed up to the last time I drove on that route in January. I’ve been deployed to Afghanistan since then (currently sitting in Kuwait), so maybe it’s gone now.

Old semi-trailers are not usually parked as billboards, although that is a collateral use.

Farmers and ranchers (and others) use them as good, cheap water-tight and vermin-resistant storage.

Sometimes, hay is stored in them. There is a saying in the country; “What is a hay-barn good for? Catching fire”. If you drive in the country much, you’ll see it.

I always tell our children, learn something new each day. I just did! Next time I see a trailer in a field, I will know why : )

Got up this mornin’ and was watching the local news, Fox2 Detroit… this program has got me hot and burning before the day even starts.

The initiative is probably going to the Michigan Supreme Court, being challenged by businesses who say its too wordy, more than 100 words and that its to broad and sweeping, effecting to many other parts of the Michigan Constitution.

The Governor RINO Rick has stayed out of the battle saying its between business and unions.

Eighty-two percent of Michganders who are NOT represented by a union say Michigan is NOT a union state.

All these municipal bankruptcies are a reminder that many of the taxpayer funded employees are not firefighters and policemen and that 3rd grade teacher you remember so fondly. They are administrators wielding policies that are not just parasitical.

They are killing the host. I see it most often with the schools where what allows someone to move into the big bucks of the Central Office or join the lucrative Gypsy Super circuit moving from district to district is a willingness to push toxic policies that have a collectivist political purpose.

Would you believe this Administration said point blank this week that its education reforms are based on the old Soviet psychology, sociocultural theory? They rejected all the known research of how the human mind works because it was not a theory that applied equally “to all individuals.”

Now very dollar spent to support education, K-12 or higher ed, based on this theoretical sociocultural perspective imposed by federal fiat makes us weaker as a nation. One student at a time.

Creating dependence on government largesse and trying to ensure no one is a producer independent of government intervensionism.

Our own tax money creating the shackles on the mind and manipulation of the personality. The same document said they were going with the theory that the human personality was malleable and could be influenced by educational practices and policies.

No wonder they think they can apply Title IX to STEM.

Was going to post this the other day but I was dealing with some puter issues.

Anyway, here it is, libs outraged and expressing ridicule to having their educational indoctrination challenged.

Texas GOP rejects ‘critical thinking’ skills. Really.
http://www.washingtonpost.com/blogs/answer-sheet/post/texas-gop-rejects-critical-thinking-skills-really/2012/07/08/gJQAHNpFXW_blog.html
By Valerie Strauss
In the you-can’t-make-up-this-stuff department, here’s what the Republican Party of Texas wrote into its 2012 platform as part of the section on education:

I don’t think the Texas GOP expressed its concerns very well but both Higher Order Thinking and Critical Thinking have unusual meanings in ed world. They have every right to be concerned but they have now laid themselves wide open as being against analytical thinking.

Which is sad because Higher Order Thinking is designed to manipulate the consciousness. It is based on Mihaly Csikszentmihalyi’s flow work in psychology and is being pushed by schools of education. Robert Kegan at Harvard is also involved with some of this altered, 3rd stage consciousness work.

It is actually where all this push on emotion and Positive School Climate takes you. I have been writing about all the social and emotional learning emphasis in the Obama Admin’s mandates under the Common Core they are pushing.

I even explained the Higher Order and rigor Bait and Switch of words recently. http://www.invisibleserfscollar.com/what-if-higher-order-thinkingdeliberate-confusion/

And the Texas GOP was correct to track it back to Bloom. I would have taken it further to his mentor and friend, Ralph Tyler.

This is like Bill Ayers designing a “Critical Thinking” program.

“Critical” is used like the Frankfurt School used the term.

I posted about that sign before, and I drove by it last November. It was totally burned last fall, so the farmer must have fixed it up.

I said this yesterday on twitter but it fits here as well. The Dem motto – Give us your tired, your poor, your huddled masses and we’ll hustle them to dependence and despair.

50% of filers pays essentially zero income tax. But another 100 million adults don’t bother to file. Many of them “produce” goods or services, but they are in the gray market, so they qualify for free health care and food stamps.

In New Orleans, police used to do random checks for auto insurance in the metro area, but it was verboten in the city, where over 50% drove without insurance. Since I lived in the city, my rates were about double what they were a couple blocks away. 50% pay double to cover the 50% that didn’t have to bother with insurance.

Laws seem to only be applied to squeeze certain classes, and if you are connected you get an exemption. At the very top corporate level people and unions have lobbyists. It is the small business owner that is most under assault. But the 100 million adults that don’t even file get to demand others “pay their fair share”, while they skate.

Rather than implement a plan to encourage all to climb the ladder of success, Obama intends to punish the successful, and reward the non-filers. The 100 million non-filers are ignored, and even encouraged to get on food stamps or other entitlements. That is Obama’s parasite base.

“Higher order thinking”. Hmmm. How many times have I heard cults use those particular words to justify some sort of cultic idiocy?

What notible groups? The comet cult that pulled a mass suicide, Jonestown cult, the Bagwan scam, who else?

I live about 50 miles from that location. I saw the trailer several years ago, but haven’t traveled down 71 HWY (soon to be renamed Interstate 49) for several years.

Message to Ryan, please be safe and thank you for your service to the country…God Bless!