It’s getting hot in CA

It’s getting hot in CA

I took this about a month ago in Woodland Hills, Ca, a suburb of Los Angeles. 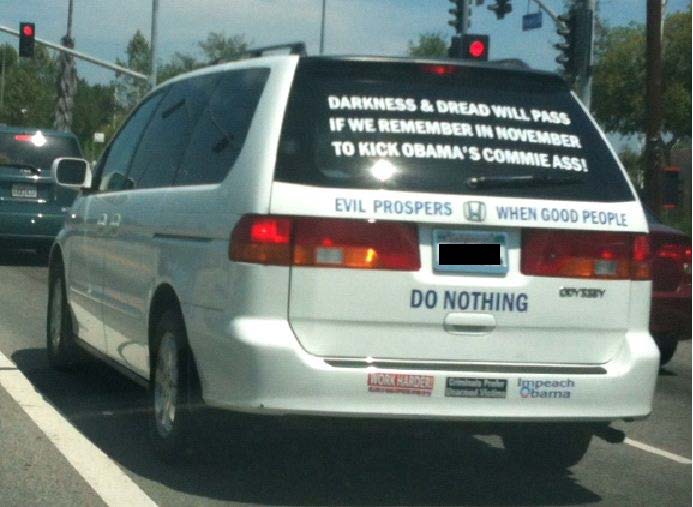 “The truth will set you free.”

I’m surprised that CAL-TRAN hasn’t banned this vehicle from the roads.

Note: These are the same roads paid for by the taxpayers of Cali and the USA so the Democratic legislators could drive to Sacramento and systematically destroy one of the most prosperous economies on the planet.

DOT.CA has no enforcement arm, John.
There is a technical possibility the window sign obstructs too much rear view but I doubt you’ll find many traffic officers interested in enforcing a vehicle code section that’s otherwise flagrantly violated daily by thousands of businesses and sports fans.

This car was in CA? With CA plates? What the hell is going on!

It’s like I keep pointing out over and over and over again. There are PLENTY of Republicans and conservatives out her but we don’t have a Republican PARTY. The State GOP officially declared bankruptcy last Thursday.

We might have elected conservative Tom McClintock in the recall election but the Bush crowd insisted on Schwartzenegger. We might have had Tea Party conservative Chuck Devore in 2010 but McPalin came in and endorsed Fiorina.

About 7-8 years ago, the entrenched Republican incumbents cut a deal with the Dems to not challenge fellow incumbents thus accepting permanent second-party status in exchange for incumbent safety. So it’s not Republican voters or even CA voters who screwed up this state, it’s the Republican Party! And now they are bankrupt. The 2010 election was the last straw. You can’t expect us to vote for Republicans when the national GOP establishment insists on cramming Democrats down our throats. It’s the same Republican establishment that crammed Bush, McCain and now Romney down our throats.

Let’s hope that last week’s Glenn Beck rally in Dallas spells the end of that GOP establishment so we can have a two party system that represents PEOPLE again, not corporate citizens of the world and their dirty money and crooked banks.

As a Democrat in California, who has observed the CA GOP shenanigans close-up since 2009 (courtesy of the local Tea Party group), I second what Pasedena Phil says.

One of the advantages of being a rebel Democrat, is that I often hear the thoughts of my fellow Dems expressed. NONE are impressed with Obama, and realize the “You Didn’t Build That” statement was incredibly damaging. They also despise the continuous loop of “racism” charges.

No, California isn’t “in play”, but I suspect Obama’s margin of victory here will be considerably less than in 2008. Translate this margin loss nationally, and it will such an historic loss that the phrase “Obama’ed the election” will be coined to define a nuclear-level electoral defeat.

As a nominal Republican in California who has observed the CA GOP shenanigans close-up since 1960, and has refused to donate any funds to it since then, I third what Pasadena Phil says.

Major problem is the state is too big. The party (the state, too) should have been split into at least thirds. The bigoted idiot powers-that-be have pretended for decades there are few Hispanic voters here and ignored them whenever they could – even though many Latino interests coincide with the national platform. State GOPers are simply “whack”, and I refuse to prolong their “regime” until an adequate number of Tea Party-type replacements have been seated.

BTW, I don’t believe the polls showing the race to be close. I live within blocks of CalTech which is a liberal bastion. I know some professors there and they are all liberals. We don’t ever talk politics but it came up lately with one of them assured me that their love affair with Obama is over.

I still don’t believe Romney can win in CA because the GOP hasn’t made any effort to win CA since I’ve lived here. But CA is still the same state that elected Reagan as governor propelling him to the presidency. We are much more reliable to send a conservative to the WH than MA or TX or FL which are being taken over by Kennedy Republicans.

No, California is not the same state that elected Reagan, mores the pity. A significant percentage of those voters have moved out either due to the high taxes or looking for jobs. They were replaced with an influx of immigrants, legal and illegal in the tens of millions beginning in the 80s. The left has a substantial advantage because of it. I agree with Phil that a smart Republican party combined with electing someone with nads instead of the idjit Kennedy inlaw governator could have made some inroads into the situation. Alas.

Ditto to Sam and Phil

That point about immigrants, legal and illegal, flooding into the state is exactly what is going on right now in TX and FL. Liberals are fleeing from the failed northern states while both refuse to enforce their borders or confront their sanctuary cities.

It’ll be interesting to see ten years from now whether all of those snarky Texans and Floridians who keep trashing CA conservatives still brag about all of those new minimum wage and below jobs while mocking CA as hopeless. At least we got our border fence built. We ought to now build one between CA and AZ to keep all of those illegals coming in through those wide-open TX and AZ borders.

Set ’em up barkeep, drinks on the house!

My little sister lives in Woodland Hills. Can’t tell from this angle whether it’s her or not.

Shocked it hasn’t been trashed by the oh so tolerant liberals in the neighborhood.

After kicking “Obama’s commie ass,” we’ll have to make sure that Romney’s conservative ass remains on the straight and narrow. Whoever leads must be held to serve the American people and interests.