Invasion of the photo snatcher

Invasion of the photo snatcher

The hostess and others looked at me with such smiles as I snapped several photos. We all shared the pride, or so they thought.

I looked just like they did. They thought I was one of them.

But little did they know. 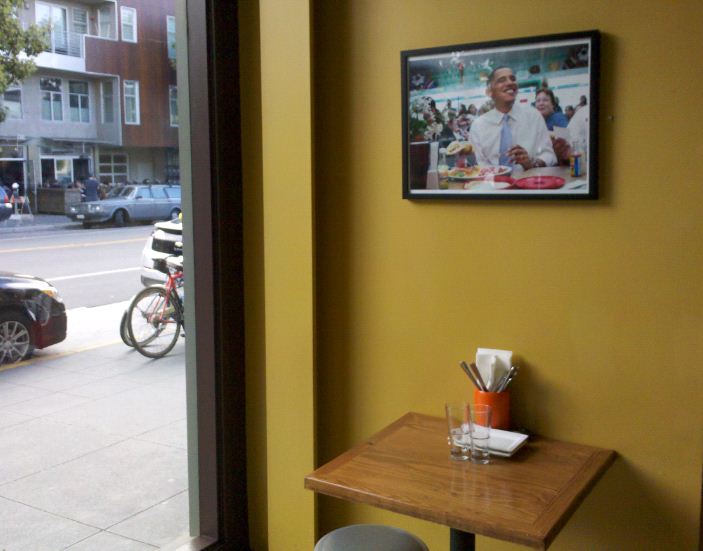 I wore my Obama killed Osama tshirt from the Rush Limbaugh Club Gitmo collection. Within 30 minutes I had a positive response from a liberal because he thought I was praising the Prez. Next I was getting praise from a conservative from the store pharmacist who took time to read the back.

Suppressant, indeed! Unless you’re in Montrose!

Around my house, to the less-gentler of us (we man critters), the Dear Leader’s name is synonymous for the daily… well, you get the idea! 😀

My first thought was Barf but ‘Ugh’ works.

Sandra: Can somebody please tell him it’s not a bumper sticker?!

Carol: When the food comes and we all sit down to eat, ask me what color I chose to paint the upstairs bathroom … and watch the expression on his face when I say “I finally settled on this pretty pastel called, ‘pinkwashing.'” Ha ha ha!

Mary: No, no, no … Mrs. Jacobson is such a sweetheart … so let him have his fun. Just smile and look proud.

Christie: Did you see the beefcake standing next to him in the picture he posted yesterday? In the post titled, “OMG, it really is La La Land”?

Carol: You just had to ruin it with that word, didn’t you?

Welcome to San Francisco, Professor! Now you know what I go through all of the time.

The PERFECT take of all time on San Fran is the South Park episode where Kyle’s parents buy a Prius, become smug and have to move to the city by the bay. There, they have wine every day, indulge in their own flatulence and spend all their time feeling smug about how green they are. However, all that smug, along with George Clooney’s appearance at the Oscars, creates a dangerous smug cloud that threatens the whole west coast. Cartman has to save his friend and goes to extraordinary lengths to do so.

Yes, you will love it! View it free at the link below. Oh, NSFW or for viewing around Lefties!

There is a cockroach on the wall of that restaurant.

That would be horrible if POTUS swallowed a cockroach – with those long antenna, clingy little legs that hold onto everything – and it was stuck to the back of his throat! I wonder if the Heimlich maneuver could dislodge the little bugger? Mmmmm…probably not. They’d have to cut his throat to get little Samson out of the presidents windpipe before he passed out from lack of oxygen. He could always blame Bush, I guess…

I wouldn’t expect anything less from a restaurant that calls itself “Tacolicious”. What an awful name!

Tacolicious is the sort of word you use after you’ve had a couple drinks and you’re sharing a couple really good tacos with a friend. “Hey, these tacos are awesome. They’re, like, tacolicious.” Then you realize what a stupid thing you’ve just said and turn red and wish you could take it back. And your friend probably groans and smacks you a couple times.

Well, I had a burrito this afternoon that was just burritoful!

You gonna hit me?

It’s for your own good. How else will you learn?

I hope you cleaned the seat before you sat down…

You do know the story behind that picture of President Obama eating at Tacolicious, right? Why he’s flashing the arrogant smile?

The Scene: 6 months ago at Tacolicious.

Professor: I write a blog. Is it okay to get a picture?

Professor [to hostess]: If you don’t mind, could you take the president’s picture with my camera? When the green light goes on it’s ready. I appreciate it. Just push this button when he’s got a big smile on his face.

Professor: May I ask what you ordered, Mr. President?

Obama: Love it! Absolutely love it!

Professor: How about the Mexican people?

Professor: Does it bother you that Fast & Furious resulted in the death of over 200 Mexicans, as well as two American border agents?

Professor: Nacho? Are you offering me nachos?

[Obama’s smile grows even larger as he laughs. Camera flash goes off again.]

I was thinking his smile was the sort worn by one who does not have full mental faculties but your explanation makes sense as well.

I’m just shocked that Michelle let him eat tacos. I certainly hope they were the “skinny” version with no cheese or sour cream. *tsk tsk*

(My kid thinks any joke that ends with “nacho cheese!” as the punchline is the funniest joke ever.)

He was just a lecturer at U of Chicago.

And most faculties I’ve known are a little mental.

Especially love his choice of words, ‘likeable enough.’ Seems like I’ve heard him say that before! So very condescending!

You’ve won a chance at entering our new sweepstakes!

For just a $3 donation, you’ll vie with millions of other patriotic Americans and foreigners to share a Fiesta Platter with the First Lady in the Lincoln Bedroom … sitting on the bed in your pajamas!

You won’t need your toothbrush … you can even leave crumbs all over the bed as you and the First Lady enjoy a few minutes watching TV while munching nachos.

We are in danger of being outspent by the Republicans!

Friend, act now and you’ll also be entered automatically for an additional $3 to win a chance for a photo-op with the First Lady in her vegetable garden. It’s green.

I could copy and paste the image but instead I’ll just let you picture it in your “mind’s eye”. The screenshot of Donald Sutherland, in “Invasion of the Body Snatchers”, pointing, with his mouth open making the alien (some would say Howard Dean) sound of Yeeargh (or whatever) at the human:)

It reminds me of when my husband and I were in Seattle last summer. We past a coffee shop with a big poster out front advertising their coffee named after O. My husband took a picture of me with thumbs down next to the poster. We tried to do it quickly so that no one would see us but several people across the street did. Much to my surprise they were laughing.

A true picture of a gastrointestinal problem. Someone get me a bromo and a new president.

His grin looks more like he is high (Choom is pretty popular they tell me on the Left Coast), and stuffing his face (was Michelle Ma Belle watching……..and nagging him?!).

I don’t know how you ate with Big Brother/Dear Leader watching…… I think I would have to leave before I got sick. 😐

This is beginning to look downright Althousian.

Taking that picture, Mrs. Jacobson was worried our tummies would bump and told us to suck it in while she took another pic.

So we ended up bumping heads, not tummies!

I assure you it was all purely platonic.

Wait a minute, you went into a place called “Tacolicious”? In San Francisco? My brain hurts.

Don’t businesses patronized by Obama (get it?) have a track record of going bust?

Montrose is Sodom, Texas whereas San Francisco is Gomorrah, CA. What are you doing there? Good thing you took your Mrs.
The only time I went to SF I practically had to fight those
TVs(transvestites)who kept hitting on my handsome hubby, almost true.
The next time you have a LI convention at Luke’s house, please consider DFW. We Texans are proud to have stadiums, ballrooms, and other venues like mechanical bullriding that would appeal to any conservative Jew or Gentile. Hooah!

[…] Insurrection Visits My Nabe Posted on July 16, 2012 3:30 pm by Bill Quick Invasion of the photo snatcher The hostess and others looked at me with such smiles as I snapped several photos. We all shared the […]