In the Matter of …

In the Matter of …

It’s the biggest case of them all.

Not a bumper sticker, I know, but an interesting campaign sign I came across in East Randolph, NY, while out for a Sunday drive. I don’t know if this is a stock phrase being used around the region or country but it’s the first time I’d seen it. The sign is sponsored by the Cattaraugus County Tea Party.

Note the upside down flag coming out of the sign, a symbol of distress. 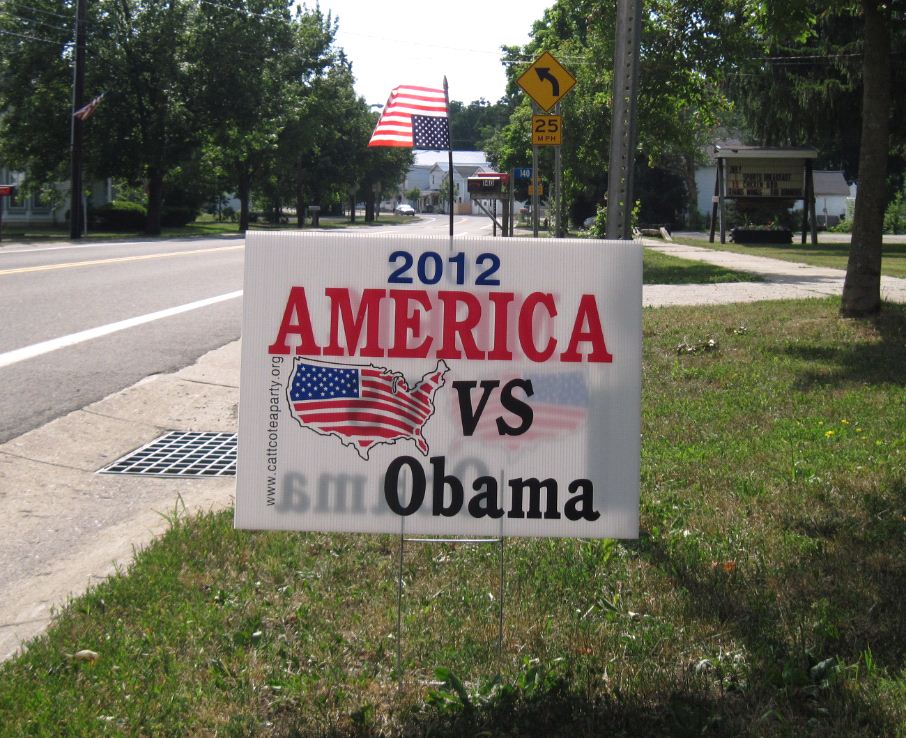 Too bad upstate can’t break away from that sewer on the bottom end of the Hudson.

Sadly, NYC was truly the ‘melting pot’ for a great civilization, but every time I’m there, it seems more and more like a Balkanized accumulation of third-world nations. Stewing versus melting, I think.

Trooper John , l suspect you are right about N.Y. Here in Colo , Metro Denver screws up the whole state. theyve elected all the major state offices. A former D.P.S. superintendant with a 52% dropout rate is our jr senator. He’s the dem & media go to guy for education. How the state GOP has screwed the pooch is a marvel. A big thumbs up tho to some of their firefighters. They were among the regional heros of Waldo Canyon. As were N.Y.s 11 years ago.

This is why conservatives must push to repeal the 17th Amendment, the direct election of Senators. In states with a bicameral legislature (Neb is the lone exception?), the state Senate often “balances” the state geographically. I’d wager that NY might have 1D and 1R under the system our Founders gave us, or at the very least, they might be more moderate, as they are serving all the state.

Seriously… if we wonder why the US Senate has become just a larger version of the highly-politicized House, it’s because of another Amendment foisted upon us by the Progressives. Yes, the founders had it right, creating two chambers of Congress with different powers and different “cultures”. The House was the “peoples chamber,” and the Senate belonged to the states. Good idea. Now, let’s get rid of 17!!

Hey secondwind, we outside of Denver have just begun to fight. If the Tea Party cannot fix the Colorado GOP, it is perhaps time to leave. And Trooper, I call (and heartily agree) with 17th repeal and raise repeal of the 16th and demand reinterprtation (repeal?) the 14th.

Holy smokes, this is exactly what I have been thinking the past few months without actually being able to put it so succinctly.

The Roberts’ betrayal of America and our Constitution continues to be a source of outrage and fear. I have 2 daughters and truly fear for their future living under the tyranny of communism.

The sign “America vs Obamugabe” is dead-on accurate as is the “Pretzel Logic” of Roberts.

As a follow-up to the Steely Dan “Pretzel Logic” video, I must link the “NYC Rock & Soul” concert featuring Donald Fagen. Their cover of “Pretzel Logic” is THE definitive version featuring Drew Zingg’s blazing guitar solo but also Michael McDonald singing the bridge is spine tingling – “Where did you get those shoes?” amazing!!!!

Thank you for that link – superb, and MM was great!

New York State has been in decline for decades and it is mostly crippling taxes and regulations that is doing it. Upstate should break away and let NYC be its own City State.

For some reason, I prefer Obama vs. America.

He picked this fight. America would be delighted to have been his friend.

Obama chose his church carefully, and spent 20 years in a relationship with Rev. Wright. Is “God damn America” sentiment really so alien to Obama? Michelle was never proud of this country, and Obama plans to fundamentally transform it. His whole history revolves around anti-capitalist revolution. He liked his Marxist prof’s best.

In Egypt and Libya, Obama helped overthrow known quantities, for what looks more like the Muslim Brotherhood. He kept boots out of Libya, sort of, which allowed thousands of missiles to go missing. In Iran, he thumbed his nose at the the Green Movement.

In Honduras, Obama stood with Chavez and Castro and Zelaya, in an attempt to allow Zelaya to move toward dictatorship, in defiance of their law. In Brazil Obama loans US funds to develop their oil, with at least one deep water rig being sent there (to even deeper water) to drill, after Obama shut down the Gulf of Mexico.

His motive to fundamentally change and weaken America is consistent. Drive up energy costs by taxing or blocking domestic production of oil, gas and coal. He pretends it is to develop a green society, even as China belches raw soot from their coal plants. Again Obama seeks to destroy what works so well … weakening America. His illusory promises are only intended to string along the faithful, so the promises don’t have to be workable.

Health care is the same … destroy the current system by overloading it with everything for everyone, while driving up costs, under the glorious banner of free health care. When “free riders” can’t afford it, force the responsible, already insured, into expensive plans to subsidize the overpriced system. His real goal is socialized medicine, one outcome for all.

Economically Obama wants all America to look like Detroit. He believes government/union jobs are the way to bring down unemployment. He punishes Boeing for going to a right to work state. He demands GM bondholders yield their senior bonds to the union bosses. He gives his Solyndra bundler loans seniority over the government. He tells SEIU that their agenda and his are the same.

And then he runs guns to Mexican cartels with no way to trace them, till they show up at crime scenes, while his administration announces he is working on gun control beneath the radar. National defense is downsized, unilateral nuclear disarmament is his goal, recently suggesting we keep only 300.

Obama meets with Media Matters regularly, coordinating their message, as they both try to shut down FOX news. They have most of the media, but silencing or marginalizing the lone wolves is vital.

QE3 will be announced this summer most likely, as government continues to destroy our currency (and any who bothered saving it) in an effort to prop up the stock market so voters stay happy past the election.

The plan is in place, and the big question is whether or not enough Americans are paying attention. Obama is all about destruction of what has worked, with golden promises that for the last three years always turn out to be blatant lies. He just needs four more years.

So wazzup with your screen name? 🙂

One is a mean, ornery, insular and unpredictable creature, and the other is a majestic creature of the African veldt. 😉

I completely agree with the sentiment. However, I never think its acceptable to hang our Flag upside down. As a general rule, and as a measure of God damned Pride, we are NEVER in distress. Good men and women have worn that flag on their sleeve, and some got buried with it. The United States of America will never be in distress as long as Honor lives in the hearts of its patriots. Keep your f’in chins up, vote this assclown out, but respect our flag. Don’t do this shit around me or my men.

I respect your point of view but, its my free speech and I’ll have a flag upside down hanging off my front porch tomorrow. Be grateful I’m not burning it, I’m that angry.

After tomorrow, the flag, either side up won’t be hanging off my house or anywhere on my property until I see something worth saluting. The flag may have meant something in the past, but now to me it represents a corrupt government meant to enslave me.