Below is a screen shot from the DNC homepage with a confident (or, maybe confused) looking Joe Biden proclaiming: 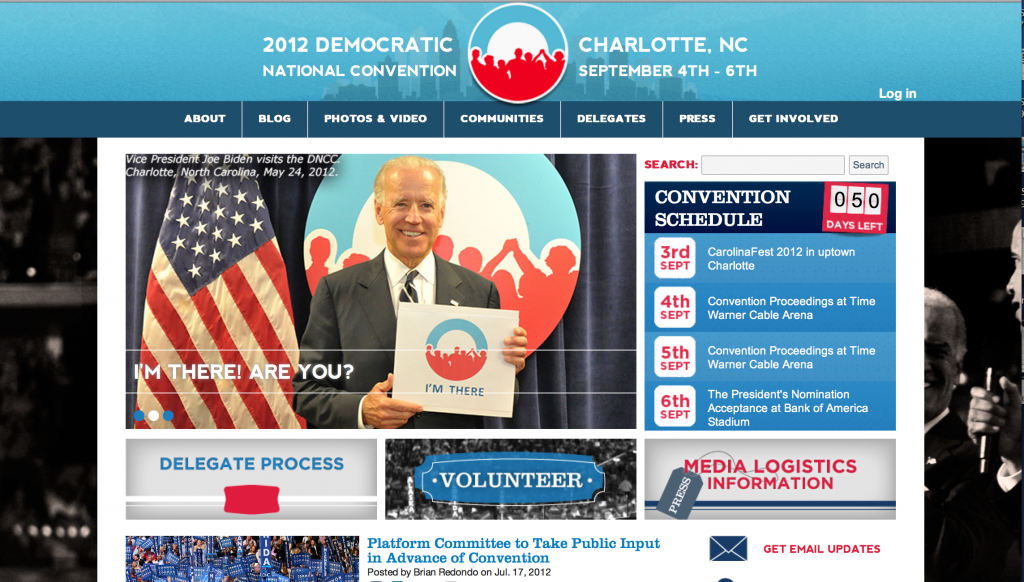 Unlike Vice President Biden, many Congressional Democrats will be staying away from this year’s Democratic National Convention.

Although the candidates like to give a variety of reasons as to why they’d skip their party’s biggest party, its pretty difficult not to pick up on the obviousness of the actual reason: To distance themselves from the President as their reelection draws nearer.

Even the Washington Post has said that you’d have to have been “born yesterday” to believe some of the things cited by Congressional incumbents as reason for skipping the convention.

However, it now looks like the convention-dodging strategy employed by so many fledgling incumbents has gained official approval from House Minority Leader, Nancy Pelosi.  Politico reports (h/t HotAir):

House minority leader Nancy Pelosi says that Democratic members should stay home and campaign in their districts rather than go to the party’s national convention in North Carolina.

“I’m not encouraging anyone to go to the convention, having nothing to do with anything except I think they should stay home, campaign in their districts, use their financial and political resources to help them win their election,” Pelosi said in an exclusive interview for POLITICO Live’s On Congress, a new weekly show to be streamed live on POLITICO’s website and broadcast on NewsChannel 8 on Wednesdays. …

“We nominated a president last time. We have an incumbent President of the United States. We’re very proud of him. There certainly will be enough people there to express that pride, but I’m not encouraging members to go to the convention no matter what the situation was, because they can be home. It’s campaign time. It’s the first week in September,” she said.

I said before that Democrats distancing themselves from the President was “not a bad strategy.” Now it seems its an official one.

Well, when you step into the pig sty, you sure can’t come out of it smelling like roses….

Why do you Americans want to export your democracy to the rest of the world when you can’t even get along yourselves? You call each other by foul names like pigs and ass****s just to mention a few I have read here. You cannot even have civil discourse in your own government or country because of which political party you belong to. Do you understand why we would rather not have your failing system of government in our countries?

Oh, ABSOluuuutly! We are very rowdy folk, bellicose even.

What superior little bit of heaven on earth do you occupy?

And you are from… where?

“There certainly will be enough people there to express that pride”

Like one them movies where the masses are chanting while marching to the temple of sacrifice….
0oooooh eeeeeeey Oh, OooooOOOOh

Anyway, Obama’s styrofoam pillars of stability are on built on shaky ground..
-some fragile dem could get an owie

Add that NC isnt the “showpiece” they want paraded in front of voters. Snip from an article that gets into all this

Labor unions, a core Democratic constituency, are up in arms. Democratic Gov. Bev Perdue isn’t running for re-election; Democrats say she was likely to lose. The state Democratic Party is in disarray over an explosive sexual harassment scandal. Voters recently approved amending the state constitution to ban gay marriage, a position that runs counter to Obama’s. And unemployment in the state remains persistently high.

I can say first hand as a NC resident..Obama is not popular here. Also add in that in the background..there are alot of what Ill call “old school” democrats. That group are the sorts of folks that didnt mind a Reagan.
Any appeal Obama may have here is with far left fringe types of democrats and black voters.
Its not like Obama is coming home to the bosom of progressive thought.

I don’t know why you Americans are so surprised by the slow economic recovery. We wrote about this a long time ago, in 2008 if I recall correctly (London School of Economics). “Regardless of who becomes president in 2008, you will experience the same slow recovery, for at least 6 years.”

Anyone who studied economics 101 could see this coming. There is no person with a magic wand to fix the economy or the world economy (which is a large factor in the US recovery) but somehow Americans always think a president will come into office and jobs will flow out of your whitehouse during the next four years.

You have been conditioned by the media to believe in economic magic wands, unicorns and leprechauns.

“Anyone who studied economics 101 could see this coming.”

Excellent! Put up your links where you made that prediction, please.

Typical lying dem strategy. Try to lie to the homefolks that their guys not a DC sonsabitch. When in reality they are worse. They are a deceptive lying DC sonsabitch who thinks the homefolk are stupid.

At this rate, the only ones showing up will be those in the “Congressional Progressive Caucus”.
You know, the ones Allen West mentioned previously as ‘commies’.

Did they ever figure out how to pay for the convention?

I know they had to switch venues-

Did they ever get their “union labor” issue resolved?

How about the national crisis of “no booze”…..I know it was quite the panic for a while–haven’t heard much lately

I heard that Frau Oberstgruppenfuhrer PeloSSi had to do something quickly, because the U. of Wisconsin doctors, who were scheduled to hand out excuses, had to work.

Remember “Elvis has left the building”?

“Jimmy Carter has been blocked from entering the building.”

We need one of those “poll” widgets so that we can vote on what amount we think the “Give a $? Donation to the Obama 2012 Campaign by Midnight & You Will be Automatically Entered to Win a Chance to Attend the Democratic Convention as an Honorary Nonvoting Delegate (travel & lodging at your expense of course, and other state & local taxes may apply)” Raffle. I predict a opening request of $3, dropped to $1 at the last minute.

Really, anyone here that thinks that isn’t coming down the pike? They have to fill that convention hall somehow – imagine the imagery if they don’t.

If it were not for a spoon fed dumbed down public, the GOP would by this time be running away with this election. Anyone with an ounce or two of common sense should be able to detect the “real” from the “fiction.”

Such is the case of the “Panthers” vs. “Bank of America” stadium ID. Reality substituted by wishful thinking.

But it is instant gratification in the way of free stuff from the government that could carry the day. This one ain’t gonna be over until it’s over…

The Dems will come if kickbacks are involved.

Could it possibly be that enough Democrats will avoid their Presidential convention that it could be held economy-size apartment and still have plenty of space left over? Never mind that the stadium is too small for Obama’s ego.

Texas Democratic legislators left the state to avoid doing their duties. Fortunately for them, the TEA Party had yet to ramp up their efforts. Thus when Wisconsin Senators fled the state, they got the name “Fleabaggers”, to rhyme with “Tea Baggers”. When legislators from Indiana tried the same trick they didn’t get a catchy name. Is there a trend here?

The Soviet Union boycotted a UN Security Council meeting exactly once. OMG! They have more guts the our Democrats!

Yes, but that was the one meeting where military action was authorized to remove NKPA troops from South Korea and restore the 38th parallel as the demarcation line between the two nations.

I guess if you’re going to screw up, go big or go home!

I think they should all skip the convention except for the speakers. Empty auditorium, Obama and Joe speaking. TV on mute. Best Democrat convention ever

All the polls show Obama and Romney neck and neck in a very tight race. Then why are all the Democrats staying away from him? Do they know something we do not?