You were against Obama before it was cool?

You were against Obama before it was cool?

From reader Brian, who spotted this vehicle in Santa Cruz, CA.  Neither Brian nor I could identify the flag, hopefully it’s not something bad: 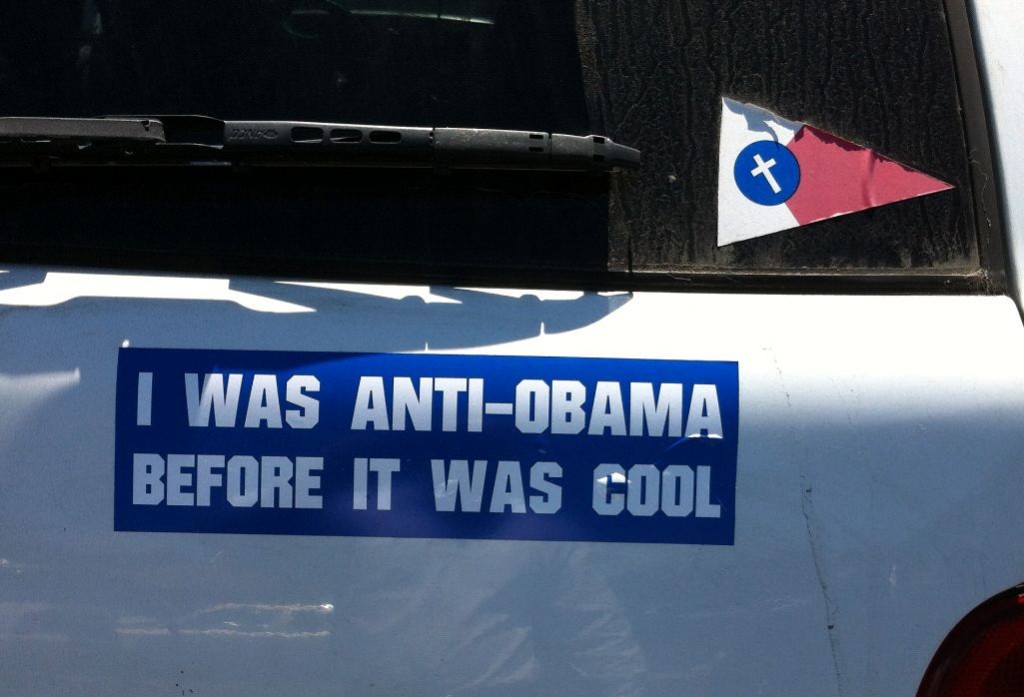 well I was against Holder in doj back in clinton reign (does anyone think their reign ever ended ???? ) so I am the coolest 🙂
I ROCK 🙂

the link to my site was accident, sorry. can’t edit to remove.

I was anti-Obama before it was racist.

Woooooooo, I want one of those! Although, outside of Chicago, I think my car wouldn’t last too long.

The flag looks rather like a yacht club burgee, or, more likely, a yachtsman’s private flag.

Other than the pennant shape, that flag contains the standard elements of a Christian flag – red, white, and blue. But normally it’s a white field, with a red cross inside a blue square (there’s s term for that particular field but too lazy to google at the moment).

Now, being it’s Kalifornia, it could be the flag of the Church of Christian Yachtsmen or something else not quite “mainstream.”

Believe it or not, I am in Korea building drillships and we just placed an order for Msritime signal flags…. Red over white is the letter “H” and also means “I have pilot on board”.

DocWahala loves the subtle message… Will take left wing wackos years to figure this one out.

Wow, that is awesome. Thanks for sharing!

I take bragging rights for Hollywood. I told all my Obama-smitten peers in the film business in early 2008 that not only was he unsuitable for the job but that he would prove disastrous for the country. I made this argument from a dispassionate, classic-liberal point of view. They thought I was ridiculous. But this was the easiest prediction I ever made in my life. It took no skill or prescience. Having been raised in the hothouse of the Left I was painfully aware of the impracticable, angry-adolescent conceits and ungovernable incontinence of the Leftist mind. And I knew Obama was a Leftist. (The lazy and arrogant morally-superior elitist posing as the “cool, judicious centrist” Ha!) But the Leftists I knew didn’t believe Obama to be a centrist. They didn’t want someone who would “bring the country together.” They wanted someone who would force it apart, and force their view on the rest of the stupid backward country. They LIKED the fact he was an effective dissembler. It was only Rockefeller Republicans and independents who fell for the “post-partisan” hokum. The Leftists I knew were aware that Obama was a radical, or had radical inclinations. And their disappointment now isn’t that he has failed to be a bipartisan healer, but that he’s proved to be a “Neville Chamberlain.” The delusion is circular and endless. That they thought he was unique and profound and mystical made me almost sick with laughter (private laughter).

My sister works at a used book store. I bought a book titled Spice about the history of the spice trade. Before I finished the prologue, I began to suspect he author might lean left. Then, a magazine subscription card, used as a book mark by the prior owner fell out, for a magazine entitled The Progressive. I went to the website; it makes Time and Newsweek look like moderate center publications.

scary to see what the unrestrained left really looks like!

I lost numerous friends from the Liberal Democratic world because I was cool all during the 2008 campaign. Actually, I startled a few friends back in 2004 when I commented after Obama’s famous “We’re Not Black or White America” Democrat Convention speech that the Republicans should start getting “the goods” on “this guy” if they know what’s good for them.

Not a big follower of politics before 2008, so I hadn’t heard of him other than he spoke at the Dem convention. The first time, probably in late 2007 or early 2008, I heard his name associated with Bill Ayers. BIG red flags went up. I’ve been distraught ever since, envisioning what was to come. Yes, it is every bit as bad as I thought it would be. Wish I had been wrong.

“Yes, it is every bit as bad as I thought it would be.”

Aw. If Obama wasn’t so incompetent, it would be even worse.

l agree Jenny , Ayers was an early flag. l knew he was a fascist when l heard he was of the Chicago machine. l admit he has far exceeded my expectations. l think the take away lesson not so apparant 4 years ago is ; Yes the dems are that stupid & irresponsible. l have always felt that the dems in their over enthusiasm pushed him to the head of the line too early. The truth apparant now is it didnt matter. He is a full blown fascist , commie if you will , & that wont change.

Let me think this one through. The message of the sticker is that it’s “cool” to be anti-Obama.

The Congressional Black Caucus has stated that calling Obama “cool” is racist.

So, if I don’t call Obama “cool,” I can avoid the unpleasant thought that Obama is actually against himself, being called a racist, call my self “cool” and, thereby, express my opposition to him.

The burgee (flag) is of the Santa Cruz Yacht Club. http://flagspot.net/flags/us~ycscz.html

That flag could be a yacht burgee – one must remember that despite the town’s abject surrender to loony leftism, Santa Cruz translates directly to Holy Cross, and there it is in pride of place. The symbolism is also very useful as a counter to Obama’s bullying of the Catholic Church.

I remember seeing, during the 2008 campaign, a poem written by a Santa Cruzan in phrases of the most touching faith, telling the world that this Obama critter was worthy of complete trust in his coming crusades, and would govern in the most just and righteous manner. I was already a heavy Obamaskeptic, but that poem confirmed the attitude, and his subsequent behavior (along with that of his AG) has only sharpened it. Vote the crooks out already.

Sadly, back in 2008 and in the “glow” of the “immaculation” (as Rush calls it), EVERYone was calling Obama “cool.” (Remember Obama as Superman – including all the images, and other comic super-heroes?!)

Quite frankly, I never liked him, or thought much of him; I remember waaaay back, when he was getting publicity about being (here is the only link I can find that outlines what I remember reading at the time) the “the first African-American to be president of the Harvard Law Review” and thinking to myself, “Hmmmm….Ivy League school…..it appears like somebody needs to get Affirmative Action cred……yeah, sounds like a gift….. And, later, learning back in 2007 that he NEVER published an article as editor (which is unheard of, from what I gather – and under some dispute, of late….seems someone found something he wrote…), it confirmed my suspicions. Not impressed, then – or now.

(I know, I know, I can hear the leftie “raaaaacist” chants already…..but being in college at the time, I know that many corporations and universities, especially Ivy League ones, were getting tough scrutiny over not having met certain quotas, etc. regarding race, gender, handicapped, and other “groups” deemed necessary for “proper” “diversity.”)

I smelled a rat when he was pushed ahead so quickly by the press, who ignored Bill Ayers and Jeremiah Wright. (I also remember when Billy Ayers and Bernadine came out of hiding and went to trial – my Mother told me who they were, because I didn’t know……she told me that they had blown up people, the Pentagon, and were Communists. And she was a life-long Democrat!!!)

Very “cool” to see reality, both then and now, IMHO. 😉

You were all ahead of me. I watched Obama’s speech before the Democratic National Convention, and was favorably impressed. But during his campaign in Maryland, I knew he was over promising, and mentioned one such over promise, namely the withdrawal timeline from Iraq, which wasn’t even logistically feasible, to one of his supporters, who was a member of Women for Obama.

She told me that her trainers had told her they knew he wouldn’t be able to do this.

I was done with him from that point forward, although I did not say so. Instead, I watched as his campaign said one thing, and he said another, on a whole series of issues. That campaign ran on deliberate lies as a campaign tactic.

The Washington Post supported him every step of the way. They had to know what they were doing, especially because I told them so.

They called me “conservative critics” in a couple of their Ombudsman articles.

You’re cooler? Well, I’m ice then. The last time I said wow about Obama was after he delivered his Democrat yabba yabba speech at their convention years ago. Then I started thinking about what Democrats represent and looked at Obama closely. No way, no how, no time, and there’s not enough melanin in the world to change my mind.

I designed, ordered, shipped and started selling Commie Obama hats in 2007. (Only, I thought it was just a joke back then…)

Ha! I recognized it to be a burgee as well, and didn’t read that it had already been identified before I opened another tab it Googled.

I found it here: http://www.burgees.com/BGroupSa-Sb.htm