You missed a spot

You missed a spot

Three O.B.A.M.A. signs are not quite enough.  You shouldn’t leave anything up to the imagination.

It’s been a while, professor. I have a few recent good ones. Here’s the first batch. Taken about a week ago near Durham, NC. 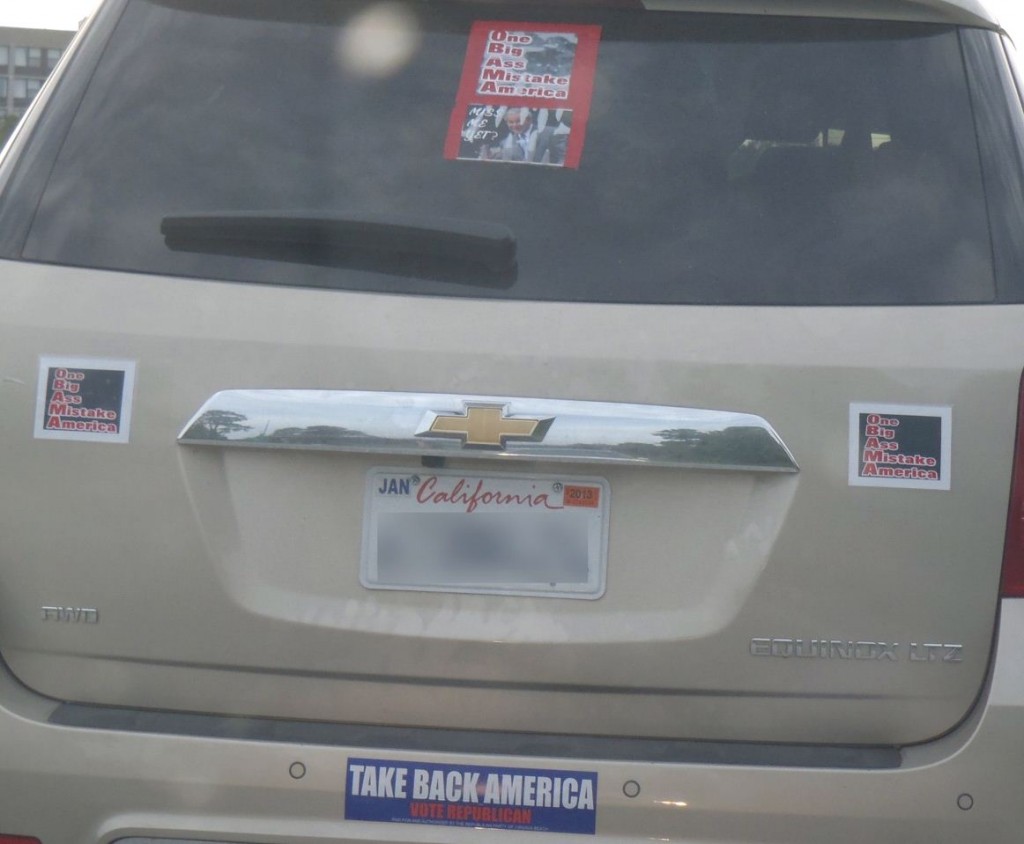 Off-topic, but is something screwy with the formatting here just now or is it my browser?

Never mind… whatever the problem was, it appears to be fixed.

With a California tag no less. Must be on one of the emigres from California to Nevada or Texas or such.

There are some Conservatives in CA. I always use sunscreen, so perhaps that has helped.

The ironic part, being here (Los Angeles, specifically), its almost difficult to find people not talking bad about the President and Democrats overall. We are here.

We vote Conservative almost every time we are given a state-wide measure – against Gay Marriage (twice!), for 3 Strikes, for Death Penalty, against Legalizing Drugs, for denying Illegal Immigrants Public Services, passed a ban on Affirmative Action, for cutting Union Pensions, against most Taxes increases, etc, etc, etc. We are here.

We are here …yet we flood the place with Democrats, and whine about everything they do. Its like Californian Voters are Battered Wives, constantly coming back for more punishment. Or maybe we are just stacked with minorities being told to vote against their own morals in turn for handouts as the Democrats continue their Modern-day Plantation. Realistically, its a huge percentage of both…

No matter, we are here. And honestly, the state has a chance of going unbelievably Red in the future if, scratch that, when Democrats lose their masks, screwing up so bad that the Minorities actually open their eyes. It will happen, eventually, and possibly sooner rather then later with the way the Democrat Party is imploding before our eyes.

How else do you get 1.5 million Job Having Tax Payers leaving a place if there are no Conservatives? Our ranks are thinning, but we are here.

HEY, watch it! I’m 5th generation Californian (before Gold Rush). My Dad wants everybody who got here after the discovery of gold at Sutter’s Mill to move back to whereever they came from – we were a lot better off with a statewide population of under a million, compared to today’s nearly 40 million. How’s *that* for a ‘nativist movement’? 🙂

New format? Please go back to the old one!

There should be one on the pitcher’s mound that reads, “We Holder you in contempt.”

The cross on the back of the vehicle gives it away.

You mean the Chevy symbol? That’s the sign of the anti-capitalist since Obama took GM for the fascists!

l note the plate expires in Jan. , signifying the culmination of “The Winter of our Discontent.”