You don’t need a weatherman

You don’t need a weatherman

We arrived an intermediate destination, Culver, Indiana, late Friday night. Culver is a small mid-west town in Marshall County, about 50 miles south of South Bend. It is perhaps best known for the Culver Academies, composed of the Culver Military Academy founded in 1894 and the Culver Girls Academy formed in 1971, whihc are located on the very scenic Lake Maxinkuckee.

Never having spent much time in the mid-west, coming to Culver when older daughter attended exposed us to the direct, plain-spoken nature and core integrity of these mid-west Americans. I do not know a lot about Indiana, politically they´ve got Mitch Daniels, which must be a mark of good decision-making. More recently, as you know, they turned out rino Sen Lugar for Mr Mourdock–which must be a very good thing, and reflective of the plain-spoken nature and core integrity of Hoosiers that I mentioned.

Short story: That plain-spokenness is also apparent in the Lake Maxinkuckee Environmental Council in its joining the protest against a Florida-based company´s proposed wind farm. All around Lake Max there are signs against the wind farm: “Not Clean, Not Cheap, Not Green¨ This is a very good development.

NextEra is apparently one of the companies which is/has benefited from Voldemorts spendthrift crony capitalism….

Yep, more of that smart government and green energy we´ve been hearing about. Apparently NextEra (and other such companies) are pushing hard to get these projects started before the end of the 2012 year, as that is when the Federal Govt wind tax credit will end. 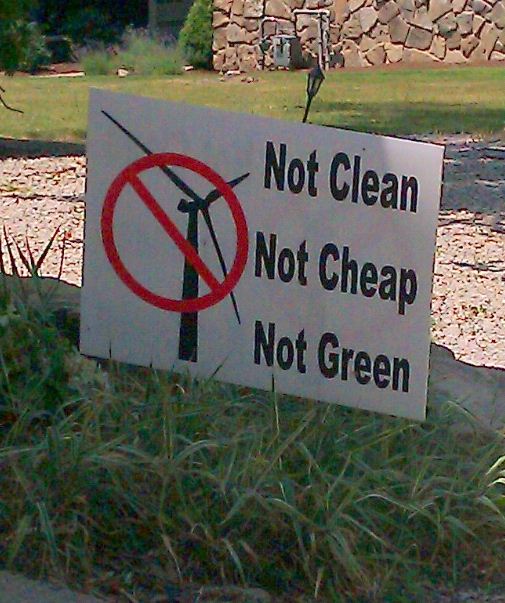 My favorite visual icon of the world of wind energy.

I’ve suggested there are two kinds of energy; reality energy, and delusional energy.

The latter requires vast wealth transfers in the form of subsidies, makes terribly inefficient use of resources, and gets us very little in return.

The former lights, warms, cools our homes, makes us more healthy and well-fed than any people in time, and moves us through space virtually effortlessly.

Thanks! Makes me laugh every time I see it!

Kinna purty, innit…? I bet it would have been even better at night!

We were on a trip from the Lincoln Library in Springfield, IL to Reagan’s birthplace in Tampico, IL (that’s pronounced TAM-pi-co, which I did not know). These wind farms are all around Bloomington, Peoria, LaSalle and surrounding counties…an absolute blight on the land. They go on and on, they are distracting when driving and they certainly removed the “bucolic” from the landscape. I’m glad someone is putting up a fuss about new ones. I only wonder how we’ll get rid of the old ones.

When trying to find out some information about these awful things, I found a website for “Midwest Wind Energy”. They have a sidebar with an obviously unintentionally ironic and hilarious quote from Henry VI, Part III, “Ill blows the wind that profits nobody.” I think a better quote would be from King Lear, “You are not worth the dust which the rude wind blows in your face.”

I predicted early on that before the other windmill shoe fell, that these slow-turning behemoths, positioned as they are on windy highlands and other avian-friendly areas, would soon fall victim to the ESA. As we’ve seen, migratory birds, raptors and bats, inclusive of some endangered and threatened species, are being killed in pursuit of guh-reeeeeen energy.

And I was also that smart-ass who asked how we were going to replace this power when the wind wasn’t blowing, or in the case of solar power, when it’s dark.

“Windfall” is a movie (available on Netflix) focusing a small town where the local politicians get replaced when they favor a wind farm, and others don’t.

They are not so green, and destroy landscapes and property value. Our electricity costs don’t have to “necessarily skyrocket” just because a few left wing nuts have a misunderstanding of science and the economy.

I discovered “Windfall” on Netflix as well. It’s an interesting documentary. I highly recommend it.

Good flippin’ grief … this guy is like horse crap in a barn – Everywhere. What is Google/Syndication thinking? His ugly pug mug pops up on all manner of websites, conservative websites, progressive sites, even home cookin’ sites I suppose. Give him $5.00? Okay, I’ll donate $5.00 to whoever punches him in the face, every time it happens. If they video capture it, I’ll make it double.

Oh, vis a vis “windfarms” …. I hate them, viscerally hate them. They are environmentally averse, wildlife killers, and wilderness wreckers … and possibly the most inefficient energy sources, taken en’ mass, there is anywhere. A single unit on a farm is not the same thing. Only solar is a rival for unreliable generation…and foreign sosurcing to boot. Mainly, however, with a lifetime of wilderness wandering, I find them an abomination before G-d. Literally.

Don’t ever give me access to large amounts of C4 and Detcord. I learned just enough in the military to be very “useful” on this subject.

I was born and raised in Indiana, and you’re right–Hoosiers don’t mince words.

Culver is in northern Indiana, which is actually the more liberal part of the state. So I’m pleased to see these folks telling the windbags to buzz off.

Fly-over country sometimes has its virtues, folks. I’ll probably take flak for this remark, but … frankly, you can tell when you’ve crossed the state line from Michigan to Indiana without need for a sign. You go from a driving environment of rude, crude aggressive drivers to one where they have manners and actually use a turn signal, avoid exiting a free way from the far left lane, etc. Going the other way, you know you are back in Michigan when a huge pickup with 40 headlights comes up behind you to within 6 inches …even if you speed up to 85+ mph … and you vehicle is again shocked by wheel eating pot holes on roadways refinished day before yesterday.

Not to mention the relative peace and quiet of going from 150 miles of I-94’s concrete expansion joints (boom boom, boom boom) to asphalt.

Thanks for confirming my suspicion that a breed of northern redneck is thriving in Michigan. I’ve run into a few Michiganites down heeyah in Tejas and they fit in quite well with the local “culture.”

Who needs groceries when you can’t even get bags to carry them?

It was a bit awkward for both the boxgirl and me yesterday when I stopped at the supermarket on my was to work.

As I was paying the checker, the obsolete boxgirl asked me if I wanted to purchase a bag to hold my groceries. I told her I would just carry my stuff. I struggled to grasp everything and she tried to slip things under my outstretched fingers … finally saying, “Why don’t you put the packs of gum in your pockets, first, then …”

It’s just madness. The people whose job it is to box your groceries have now become personal grocery-carrying trainers and directors.