The Center for Consumer Freedom placed this full page ad in The New York Times yesterday: 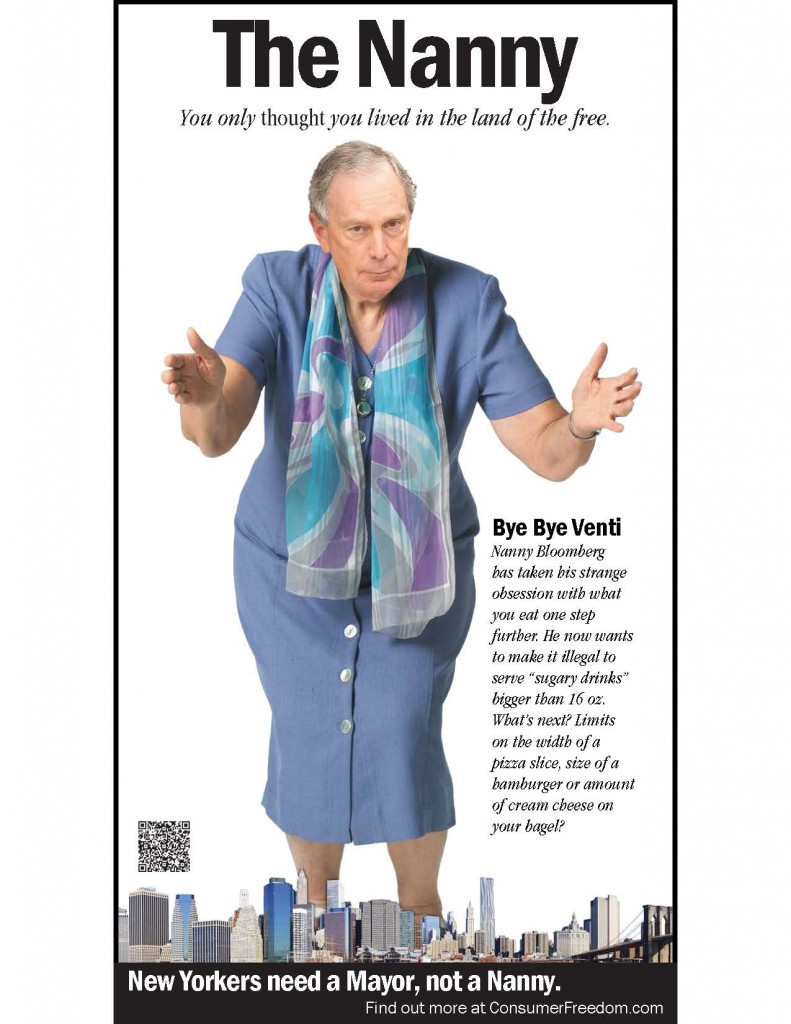 You got that right–I’m glad I haven’t had breakfast yet.

I can’t think of anything funny to say about this. He is a pathetic little man.

Maybe Bloomie can get the lead in the remake of Mrs. Doubtfire.

Welcome to life in Bloombergistan!

I call it the Caliphate on Hudson.

Talking about Caliphate on the Hudson, across the river this is going on!

…and Bloomberg considers himself a Republican???

Nu Yawkahs sure deserve better but must remember that they re-elected him to a third term even though there were supposedly term limits!

Reel impo’tant stuff for sure…

New Yawkers deserve whatever befalls them under this man. They elected him and re-elected him.

They pay the highest or the near-highest taxes in the country. That simply encourages higher taxation elsewhere. Greedy bureacrats see NYC getting away with it so they follow suit. It spreads like cancer.

The soda thing is about revenue, not health. People pay twice as much tax to buy two 12-ounce sodas than if they buy one 24-ounce soda.

Screw New Yawkers. Let the commie followers pay it. I sure as hell don’t feel any sympathy for them.

Good King Bloomberg is just trying to keep us safe!

Ironically this is the Guy who loads up his popcorn with POUNDS of salt….

Nu Yawkahs sure deserve better but must remember that they re-elected him to a third term even though there were supposedly term limits!

Democrats buy offices using taxpayer dollars for payoffs. But good old red-blooded American Bloomberg bought the office fair and square, out of his own pocket.

Ya’ know, people deserve the governments they put in place..

I did chuckle at the ad. I gave up drinking soda years ago, but don’t support Bloomberg’s policies. If you want to drink yourself to death (with sugary drinks or alcohol,) smoke yourself to death, or do any number of activities known to shorten your life, have at it, just don’t expect me to pay for it. Reason #1 why government should get out of healthcare… we all pay for other people’s irresponsible behavior.

That man has absolutely no commonsense whatsoever. Does he really think that people will drink less soda? If he does, he needs to have his head examined along with Warren.

He knows that people won’t drink less soda. He’s simply figured out a way to get more tax revenue as a result of that.

I have to ask: Is this really a lap that you would want to run and jump into, all the while shouting, “Nanny, Nanny!”?

lol added this to my pic of day thread here the other day
http://www.davemacleod.net/forums/topic/45993-pic-of-the-day/page__view__findpost__p__59292

its a fitting tribute to bloonberg

The one that follows – Soros, Obama, and Holder – is quite amusing as well.

glad you liked them 🙂

I believe I read something by Dave Blount over at Moonbattery that adequately describes Bloombergs actions…
In the ultimate liberal utopia everything is either explicitly banned or mandated by government.

Bloomberg has exhibited there’s nothing that is out of bounds in his liberal utopia mindset.

Bloomberg should remind people that progressive involuntary exploitation (i.e. redistributive change) has consequences. They must choose between liberty and submission with benefits.

NY has amazing food . Why anybody would want to gulp down 1,000 calories of sugar fizz when they could eat 10 bagels in equal calorie intake is beyond me.

Seems to me a time when the oceans part & smart people walk right thru disregarding Left & Right.