After spending the day in Racine, Wisconsin — more on that later — I joined the Walker victory celebration. People streamed into the expo center where it was held, so many that Governor Walker quipped that they had to use overflow tents to “violate the fire code.”

Lieutenant Governor Rebecca Kleefisch was the first to address the crowd, which had erupted into cheers around 9:00pm when it became clear that Walker and Kleefisch were sure winners.

Walker’s first words after taking the stage were, “I want to thank God for his abundant grace.”

In response, the crowd chanted in unison, “Thank you, Scott!” 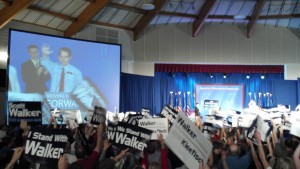 Thanking Scott Walker is exactly what the people of Wisconsin showed they wanted to do, both at the ballot box and last night. For all the countless hours volunteers put into to ensuring Walker and the others stayed in office, the people of Wisconsin are overwhelmed with gratitude for what his strength and courage has meant for their state.

Many in the country, too, want to thank Scott Walker. He has been a leader among governors and as state after state faces fiscal crises, his bold leadership in the face of all the venom and might the union and leftist operatives could hurl at his person and office, is beyond commendation.

During his victory speech, Walker focused on what happens tomorrow and his plan for mending the ravaged Wisconsin political landscape. “Tomorrow we are no longer opponents,” he said. “Bringing our state together will take some time, but I want to start right away….with some brats and some burgers, to start, and maybe some good Wisconsin beer.”

The most poignant moment came when he recounted a recent trip to Philadelphia’s Independence Hall with the other state governors:

Standing in there it dawned on me, these [Founding Fathers] were ordinary people…they didn’t just risk their fame and fortune, the risked their lives for their country….in times of crisis what has made America amazing…is that there have been men and women of courage who have said…what is most important is to stand up, for their children and grandchildren…

Governor Walker and Lt. Governor Kleefisch are exactly the types of ordinary Americans that make our whole country seem extraordinary. What those two faced as the entire arsenal of the left was thrust against them is beyond what we ask of most elected officials. As his two high-school-aged sons stood on stage next to his wife, I couldn’t help but think what they must be enduring as their father goes up against the strongest unions in the world.

Scott Walker and Rebecca Kleefisch and countless other Americans are returning to the simple virtues of responsibility, freedom, sacrifice, and courage as they fulfill their duties. They prove that “ordinary” Americans are anything but, and that it is exactly their simple adherence to these American virtues that we are in need of today more than ever.

Thank you, Scott Walker, and all those who supported him, for clearing the path to reawaken our American self-reliance and strength. That will do more to repair division with Wisconsin and within our country than any special-interest payout ever could.

I think Milton Friedman would point out that he didn’t blame the people who wanted more. He would blame us for letting them have a racket where getting more was such a easy, corrupt practice.

And the people of Wish-consin have said, “Well, enough of that”. We just need to extend and expand the assertion of reality again.

That racket is so deceptively simple, yet so destructive. Public employee unions forcibly take members’ dues, give a huge chunk of said dues to Democratic lawmakers, who in turn give public employees solid gold benefits and good wages. All the while, both groups try to convince the rest of us that public employees are making huge sacrifices and much less money working for the public sector. Maybe at one time, but…

It is indeed a racket when one realizes that if you’re covered by Civil Service, why do you even need a union? I say that you should be able to have one but not both. To me, the existing system just looks like a good way to funnel money to the dash-D politicians!

Bingo! On all points, Troop. Limbaugh points out it is a giant money laundering scheme, which it largely IS.

We all want more, and we all look out for our own self-interests. There’s nothing wrong with that and, even if there was anything wrong with that, tough patooties. It’s human nature. Self-preservation and self-fulfillment are instinctual. The problem arises when an entity we have granted the powers of governance to decide who will get what and how much of each individual’s productivity put forward for that individual’s self-preservation and fulfillment. They then make those decisions not based on the precepts of the constitution but on what policies and laws will garner them the most votes so they can solidify their power into a ruling class, grant themselves public largesse from the sweat of the brows of those they would rule, and render the remnants of individual rights a whim granted by their bastion of iron fists.

A bit frustrating and sobering to think that people need courage to stand against their own countrymen.

And given the date: We should especially thank these individuals. Let’s not just give thanks for last night…

Yes, Scott Walker and Rebecca Kleefisch deserve thanks from all Americans who want to have fiscally responsible government, as do the voters in Wisconsin.
Watching from here in California, it is uplifting to see a state making the transition.

Defeating the abuse of the recall process, Wisconsin voters made clear that adjusting public-service union contracts to reduce the state’s massive deficit was in the public interest. And in San Diego and San Jose yesterday, California voters held the same opinion by wide margins. It is encouraging to see this voter resistance to ever-increasing demands from public employees, who already enjoy better health and retirement benefits than private-industry workers do.

Other state legislators who negotiate those benefits so lavishly against the public interest might well take notice of these elections.

Congratulations are due to the Wisconsin voters of 2010 who were NOT disenfranchised by this recall abuse, and to the Governor and legislators who were reaffirmed. And many thanks to Professor Jacobson for sharing his attentions to the (thankfully failed) political process.

Citizens of Wisconsin:
You need to thank yourselves for saving your state from becoming another Illinois. Companies now know that their future is secure and will not be destroyed by higher taxes.

l suspect the Senate seat that was lost was the one casualty to the massive dem. cheatnfraud /lie machine. Without it , it would have been a sweep. Oh well the people of Wisconsin will take it back in Nov. The Chicago goons will have to stay home to hold lllinoise. THANK YOU WISC !

I so hope Wanggaard asks for a recount. The vote difference is less than 800 votes.

Someone around here advised us not to gloat. We are better than that, he said.

I made the mistake of showing our son the funny CNN video of the anti-Walker guy crying about the “end of the USA” and all morning, every time our eyes meet, my son cries out,

“Democracy is dead! It’s the end of the USA as we know it!”

He does a spot on funny impression, but he’s driving me crazy!

I guess things could be worse … gloat, gloat. 🙂

How old is your boy?

He’s 12 … and a natural conservative.

Charmander dancing to Tiny Tim. That might be the weirdest thing I’ve seen this year.

Say, where are all those “fighters” that were gonna hit hte streets today in Wish-consin?

Maybe they confused “tweets” with “streets”…?

A big defeat for the union bosses … but the venom and hate from the left will continue. A local lawyer blogger decried the injustice of teachers and nurses “not being able to organize”, as something that “came from behind the iron curtain”.

Of course being in Illinois, the layers of bureaucracy ensure subservient politicians must yield to union boss demands. It is portrayed as fair play, but seems little more than coercion and collusion at best. Hopefully this indicates the public has had enough … they see through the charade, and will not be ruled by the connected minority. But there is still a long uphill battle.

Thank you indeed. And thank you to Ms. Sorock and Professor Jacobson for their coverage of this seminal event.

As people learn to self-moderate their behavior; as they learn to respect themselves and others; the unions and other artifacts of past conflicts need to be removed. The public sector unions in particular were never legitimate and always served to undermine the Constitution and our Republican form of government.

Another “shot heard around the world.” Hopefully, it will resonate and be heard in Washington. The government (and its affiliates) needs to recall the limits of its authority and act accordingly. It exists to preserve the rights of the people it serves. Not to exploit them for one class, one “minority”, or its own selfish interests.

Being from Wisconsin I want to give a big shout out to the commenters at Legal Insurrection (and obviously Professor William Jacobson & Anne Sorock). You nutured us with a lot of necessary good will – could not have done it without your encouragement. The first political donation that I ever made was to MA Senator Scott Brown, thanks to this blog. I realized the importance of thinking nationally – it doesn’t pay to support conservatives locally without thinking of that they need to have like-minded friends when they get to Washington DC.

PS. – Anne Sorock, hope someday you are blessed with the good fortune to buy a vacation condo in Door County. Wisconsin can’t get enough of you.

[…] will fork over the cash and light incense in worship at Bank of America stadium. And they wonder why they are losing. And dying. Share […]