Obama on Clearance in New York

Obama on Clearance in New York

This is a GUEST POST from friend of the blog SGLawrence, who is vacationing in upstate New York this summer:

I was driving on Route 209 through Ellenville, New York in the Catskills on Saturday, June 23, 2012, when I noticed a gentleman sitting all alone in an empty parking lot selling Obama stickers and buttons.

I decided to stop and chat with the man to find out how the Obama 2012 campaign was doing in the heart of Democratic Blue New York State.

For those readers not familiar with Ellenville, it would be an understatement to say the Catskills town is economically depressed. With nearby Catskills resorts in Sullivan County dubbed “Leftover Borscht” and in ruins, with Governor Cuomo accused of cleaning up personally with casino interests, and with the real estate market for second home buyers/Wall Street “Occupiers” dormant, the biggest “industry” in Ellenville is the high security prison just on the outskirts of the town.

Ellenville’s Naponach Valley Mall is an abandoned mess with its main anchor tenants, the Grand Union and Ames, all boarded up and falling apart. You probably wouldn’t stop in Ellenville unless you had to go to the bathroom while traveling through the Catskills between the Hudson Valley on the eastern end and the Delaware River Valley on the western end.

The Bumper Stickered and Buttoned Democrat from Ellenville was giving away for “free” assorted Obama/Biden items from the 2008 campaign and he told me it had been “pretty much dead” for the several Saturdays in a row that he had been trying to sell his 2012 Obama goodies.

Several items had been marked down to $.50 including Kerry/Edwards buttons that read “A Stronger America.” I asked him why anyone should vote for Obama and his main talking point seemed to be that Obama had “saved the auto industry.” He didn’t have any response to my telling him that too many auto dealerships had closed up shop and that Detroit’s “saving” had been a costly taxpayer-funded support system for Union campaign coffers.

When I told him the nearby Naponach Valley Mall looked like something out of Detroit, he perked up and said Walmart was supposedly going to rebuild it soon.

He kept trying to talk me into buying an Obama 2012 bumper sticker but when I told him I was voting for Romney he looked so sad that I agreed to buy one of his Kerry/Edwards buttons for $.50 which he assured me was a “Collector’s Item.” 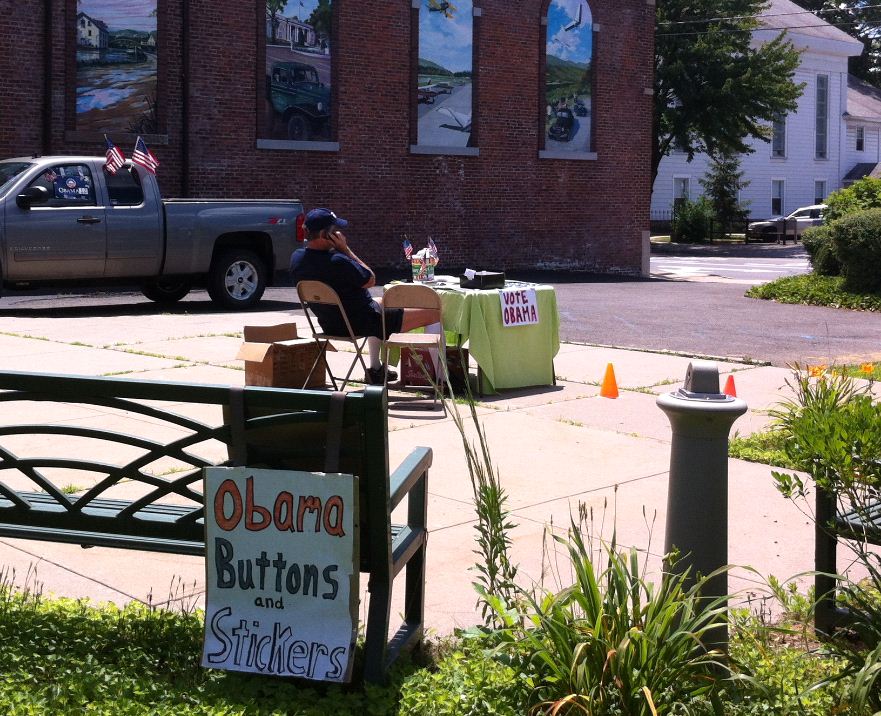 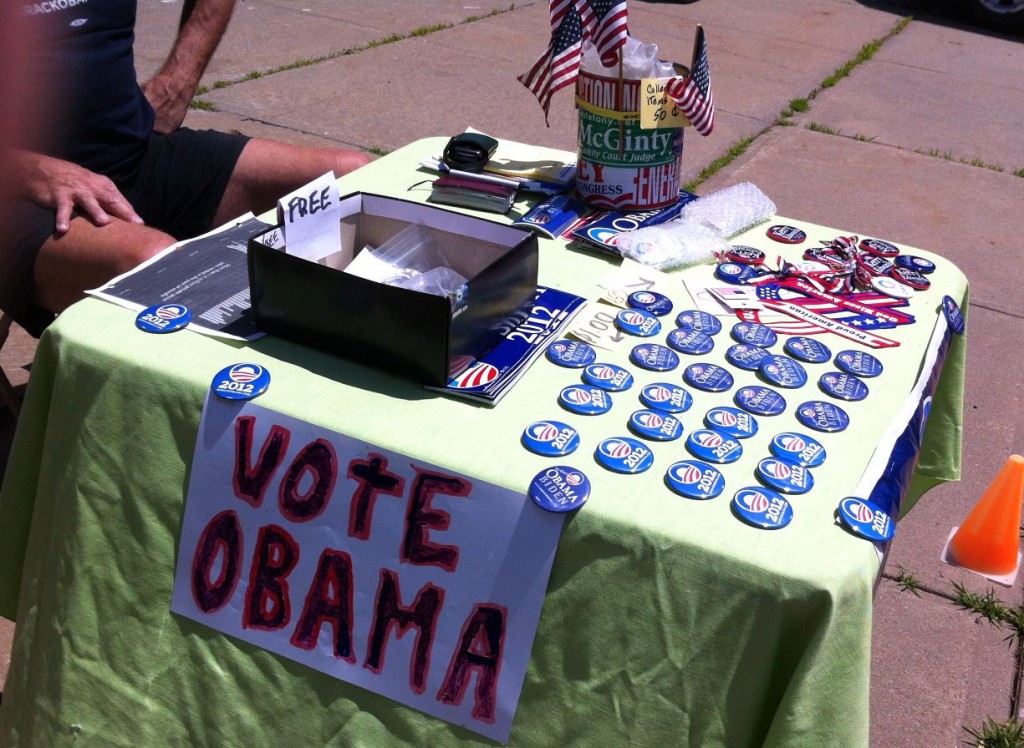 There’s little difference between Obama’s supporters and WWII Japanese soldiers engaged in a Banzai charge. Same level of reasonability in each.
In yesterday’s post about the bumpersticker laden pick up truck, you missed the most salient statement on the back, “Breathe deep! You can almost smell the Communism!”

So, let me get the straight. An Obama supporter is actually touting the fact that the bane of the Progressives’ existence, Walmart, is going to rebuild their shuttered mall?

Bitter clinger. Bitterly clinging to his false god while hoping that capitalists rescue him. None so blind….

Some people don’t know which end of the rose to smell.

I didn’t know they allowed conservatives in the Catskills!

Uh hoh man…nothing is sadder than a boarded up store.
That property is dead.

Hi Frank Laughter. They ask for ID when you drive into Woodstock, but so far Ellenville allows conservatives to drive through without checking.

I grew up in Otisville, which is a stone’s trow from Ellenville. I worked several resorts in the Catskills 45 years ago. The dems are getting what they deserve.

For Charles: You will be shocked and saddened to see Marisa Scheinfeld’s collection of photographs of the once thriving Catskills resorts. The photograph collection is called “Leftover Borscht” http://marisascheinfeld.com/#/Collections%20/Leftover%20Borscht%20/1

They were really amazing photographs, thanks for linking.

The correct spelling of my little town’s name, where the new Walmart might some day be built, is Napanoch, not Naponach.