Not above the law: Holder first U.S. Attorney General to be voted in Contempt of Congress

Not above the law: Holder first U.S. Attorney General to be voted in Contempt of Congress

17 Democrats joined Republicans in voting for contempt. One member voted present, and 110 members did not vote. 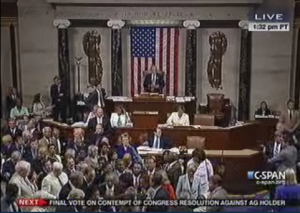 The congressman representing the district of the family of murdered border agent Brian Terry, Rep. John Dingell (D-MI), indicated he would vote against contempt.

In remarks prior to the vote, Rep. Issa (R-CA) said to Rep. Dingell: “When you say you represent Brian Terry, you do not.” Issa then read a statement from the Brian Terry family, which said that the only time they had heard from Dingell was one condolence letter.

Many democrats joined the Congressional Black Caucus in walking out of the proceedings during the vote.

Today’s vote is the regrettable culmination of what became a misguided – and politically motivated – investigation during an election year.   By advancing it over the past year and a half, Congressman Issa and others have focused on politics over public safety.   Instead of trying to correct the problems that led to a series of flawed law enforcement operations, and instead of helping us find ways to better protect the brave law enforcement officers, like Agent Brian Terry, who keep us safe – they have led us to this unnecessary and unwarranted outcome….

Well, we had to. Isn’t he the first Black Attorney General?

/s (did i really need to? well maybe so the trolls are out in force today)

Lock the doors. They are despicable, and are total liars. Time to vote all these lying, spit in the face of American people, treasonist people out. Time for term limits. Enough is enough…they will pay come November.

What is it with liberal Democrats and this “if I can’t win then I refuse to play” mentality (ref: Wisconsin Flee Party)?

Henry, the first case of the Fleeing Dems was in Texas. Remember the Killer Ds that fled to first Oklahoma where they were protected by a Democrat governor there, and then to New Mexico where Bill Richardson also gave them sanction?

The Democrats simple pick up their ball and go home if they can’t call the game to their satisfaction.

Every Congressman is up for re-election this year. The Republican opponents to these Dems should be cutting ads showing them fleeing the floor of the Congress, refusing to carry out their sworn duty to the people of thier districts. Their Republican opponents should show that Democrats care more about politics, and playing the race card, than they do about the deaths of Brian Terry and Jaime Zapata.

Remember the rancher in Arizona who was murdered? Richard Krantz, I believe his name was. Was he also murdered with F & F weapons?

I would love to show this on Telemundo or Univision. Explain to the Hispanics in this country the CBC cares more about the skin color of Holder while most of the Democrats care about Holder’s party.

We know of two federal agents who were murdered with these weapons of which one agent was Hispanic. Talk about the 200 to 300 Mexicans that we know who have been murdered, some them were police or judicial officials.

Who needs a border patrol when Mexicans and others from Latin America are kidnapped, raped and murdered on the frontier trying to get into the US.

Yeah Latinos, the Dems really care about you.

All history will show is that Holder was held in contempt by an almost 4:1 majority, but I wonder whether the Congressional Black Caucus have walked out if Brian Terry was black?

I have to wonder how the FLUCK this guy could have EVER been the AG.

Absolutely. This arrogant rotter has been corrupting everything he’s touched in America for 25 years. Simply unbelievable he was ever our attorney general.

I think the question on everyone’s mind is what will happen to the Hispanic vote when it gets out that Obama armed the Drug Cartels in Mexico? You think anyone is going to care about amnesty when there is a bunch of dead bodies back in Mexico? No wonder they are going to try and delay this as much as they can.

It’s amazing how long some of these Reps and Senators have been in Washington. I did not realize that Dingell has been in the House since 1955, taking over the district his father held from 1933-55. Ugh.

Back in his pre drooler days dufuss was considered a blue dog dem. & if l remember helped get some of Reagans agenda passed.

I take it this passed as well.
Its important because Issa will have to show some proof of what he expects to find .. if this has legs its here that they will grow.

just call the missing weapons a tax and present it to roberts, all good then.

Roberts did not create a new tax weapon that would survive the democratic process to be used against the American people.

When their brother needed their vote, the CBC went AWOL.

History will show 255 Yes, 67 No, 1 Present
A hundred years from now students will say “it looks like he obviously deserved it.”

I nearly choked when he mentioned Terry’s name. “flawed law enforcement operations” ?!? Is that how Holder explains Agent Terry’s murder?

l make a motion Mr Chairman to relocate the Congressional Black Caucus to Liberia. Do we have a second?

House has also voted to move this to civil court since it probably wouldn’t work out well if the DoJ took the lead. Heh.

I am surprised by the number of votes and how few Democrats voted no. I have to believe Obama is going to cut his losses with Holder and have him resign.

Of course there will be a pardon of some sort waiting for him if he keeps his mouth shut.

The “cowards” left the chamber so they wouldn’t have to vote one way or the other. Remember, the NRA was watching, so no vote is not a yes or a no vote and the NRA can’t use it. (Wanna bet?)

If I were running against one of the “Fleebaggers” I’d accuse my opponent of being in favor of murder.

OK, what now? When I look at things like the ethics investigation against Maxine Waters or Jesse Jackson Jr., I have yet to see much in the way of negative consequences.

So what happens if Holder just says KMA?

“So what happens if Holder just says KMA?”

Nothing, nothing at all.

I don’t think so. For one thing, the court WILL get the documents to review.

Which decade, Rags? Certainly not in time for this election. And, if the Administration can drag this all the way to the SCOTUS it appears they now have a friend in Roberts (who has “evolved” on the Court).

Just another charade. Holder and Obama are laughing at the fools who believe anything will ever come of this.

I’m not as cynical as you appear to be. Not that I condemn you…given the last few days of news.

But even the Supremes are a head-spinning mass of contradictions, and they DO come down right a good bit. Which, in some ways, makes it harder on regular folk.

I’m surprised it got as many Democratic votes (17) and that so many walked out (so they would not have to be on record as supporting the disgraceful way this Attorney General has acted (surely at the behest of his boss).

And this vote gets us what? There is no real sanction attached to this. Democrats have no shame. And sadly the Republicans have no sense of self-preservation. They think that by being wusses, they will be eaten last.

This was bad timing by the house. This has been overshadowed by the supreme court ruling. In another week this would have had been in the forefront again.

The House is late to the party – I’ve held Holder in contempt for years. 🙁

[…] As if that wasn’t shameful enough: The congressman representing the district of the family of murdered border agent Brian Terry, Rep. John Dingell (D-MI), indicated he would vote against contempt. […]

The May 24 letter to Rep. Elijah Cummings (D-Md.), ranking member on the panel, quotes from and describes in detail a secret wiretap application that has become a point of debate in the GOP’s “Fast and Furious” gun-walking probe.

The wiretap applications are under court seal, and releasing such information to the public would ordinarily be illegal. But Issa appears to be protected by the Speech or Debate Clause in the Constitution, which offers immunity for Congressional speech, especially on a chamber’s floor.

From the Congressional Record:

From the beginning, ATF was transparent about its strategy. An internal ATF briefing paper used in preparation for the OCDETF application process explained as much:

Currently our strategy is to allow the transfer of firearms to continue to take place, albeit at a much slower pace, in order to further the investigation and allow for the identification of co-conspirators who would continue to operate and illegally traffic firearms to Mexican DTOs which are perpetrating armed violence along the Southwest Border.