Took this photo on my way to work this morning — in Saratoga, California, a suburb of Silicon Valley, no less! It probably doesn’t mean California is in play, but I think it’s an indicator of Obama’s diminishing popularity here. I thought LI readers might like it, though I must say I would mildly disagree with the mustache. Please keep up the good work!

P.S. If you choose to publish this, please withhold my name as I work for a well-known high-tech company where people are generally infected with leftism.

Based on the image, Saratoga must be near Godwin, CA. 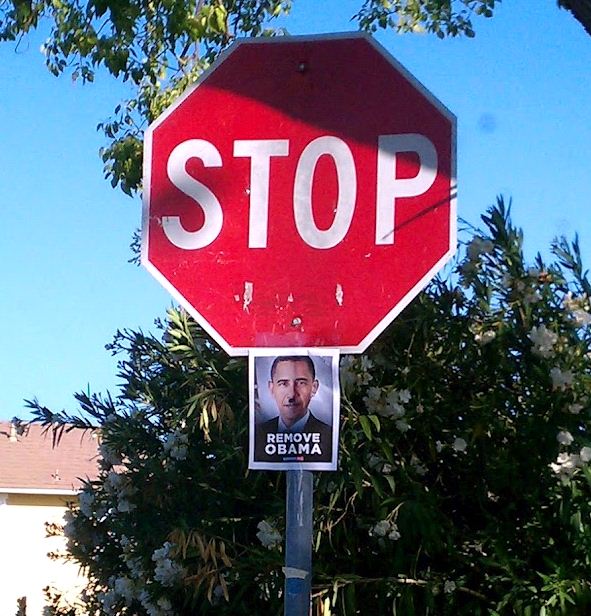 Dare we say……..sacreligous….[no pun intended]??
When I told a close but Lib friend & Obama2008 DC voter about the Texas Huntsville prisoner who ran against Obama in West Virginia…he wished there had been a ‘somebody else’ candidate in the DC Dem primaries.

BTW ….does that qualify as a visual-geographic play on words?
Moustache Obama – Godwin, CA – the venerable “Godwins Law” ?

In my neighborhood, the LaRouchePAC had recently set up a table near a fruit market and were asking people leaving in their cars to sign a petition or asking for support or something.
I decided to look on within earshot to watch what was going on and I heard one lady who stopped ask them…
Well, who are you going to vote for?
-they didn’t respond.

duh
Obots are mired in denial and so afraid of change from the disaster-in-chief they see no alternative but complete loyalty. its comical yet sickening.

I dunno – that mustache kinda suits him and his track record so far – he looks just like Francisco Franco:

And we all know how Franco was a ‘community organizer’, and spent several years ‘uniting’ people all across Spain and destroying its economy for decades, so that everyone would be able to share the experience of being poor and careful of what they said.

Yet his favorability #’s still largely hold. Amongst people most adversly affected. How is that? As WW 2 wound down , the Russian troops were in the streets around Hitlers Bunker. One of the last things Hitler heard was Russian gunfire. Still the German people encountered went stoicly on. ln the book ‘The Arms of Krupp’ they put out municions from the rubble of the factories until they were overrun. Most Obama supporters will never see reality. He will still probably pull over 45% of the vote. When Stalin died , much of Russia mourned. l am not saying Obama is either of those two. l am saying some aspects of the human are peculiar.

Genocide aside, Obama is also not Hitler because Hitler didn’t use a teleprompter and he only wrote one autobiography before taking power.

Actually, Hitler wrote “Mein Kampf” in 1925 and “Zweites Buch” in 1935 though this was never published.

Hitler, Stalin and Obama had doting mothers and were constantly told how special they were. All three turned out to be clinical narcissists.

On Stalin: read Koba the Dread: Laughter and the Twenty Million.

I don’t buy those favorability numbers. OcTEApi notes that libs are mired in denial. The “favorable” response to a question about their opinion of Barry-O is knee-jerk. They can’t bring themselves to say anything else.

But the seeds of discontent are there. Slowly but surely they’re figuring out what a disaster Barry-O has been and the exposure of his carnage is just beginning.

They may never “push 2 for ‘unfavorable'”. That would be impossible for a loyal obot. But neither will they bestir themselves to campaign for the guy who’s tearing the country apart whilst destroying them economically. I suspect that in the cold light of day on November 6 many of them will stay home. Disillusioned by their hero but incapable of pulling the “R” lever they will exercise their franchise by simply refusing to vote.

Sarah was right…we cannot rest. We need to keep the pressure on and give them more reasons to opt out on election day. Wisconsin showed us the way. Onward!

What exactly does Mr. Godwin mean by

A “meme,” of course, is an idea that functions in a mind the same way a gene or virus functions in the body. And an infectious idea (call it a “viral meme”) may leap from mind to mind, much as viruses leap from body to body.

As far as I can tell, a gene and a virus do not perform even remotely similar functions in the body. Viruses use existing genetic material to reproduce.

What exactly is an “infectious idea?” Is “liberty” an “infections idea?” Not in most of the world, but in many parts of North America outside California, New York and Washington, DC it appears to be highly “contagious.”

And the “black hole meme” evidently swept across the globe in only about 200 years on while French academics evidently still persist in calling them “dark stars” rather than “black holes” though the term has another meaning in French. Of course, many French academics seem to persist in calling email “courriel” because they remain, well, peculiarly and annoyingly French.

And is Mr. Godwin really calling upon us to exercise self-sensorship?

But now that we’re living in an increasingly information-aware culture, it’s time for that to change. And it’s time for net.dwellers to make a conscious effort to control the kinds of memes they create or circulate.

Why would we want to make a “conscious effort” to avoid speaking “truth to power?”

“Godwin’s Law” is worse than silly, and more harmful than helpful if and when your ideological opponents do, in fact, espouse the same beliefs, goals and tactics as the Nazis.

Calling someone a Nazi when they are in fact espousing Nazi aims, beliefs and programs is, well, truthful and correct if a bit embarrassing to the whomever the term applies. But I am hardly interested in protecting the feelings of Nazis or Islamists who are out to destroy our unalienable rights.

It strikes me as yet another tool leftists invoke against their opponents when we correctly identify their aims and goals and tactics.

You may be paranoid, but that doesn’t mean they aren’t out to get you. And failing to identify a “Nazi” a “Nazi” is, in the end, potentially harmful to your life and liberty…

“WarEagle’s Refutation of Godwin’s Law”: Failing to identify a “Nazi” as a “Nazi” is self-destructive of life and liberty and protecting the feelings of Nazis isn’t worth the price.

Professor, do I have one stuck in the filter?

It was caught in spam filter, not sure why there weren’t links in it. But I’ve cleared it.

Yeah, this isnt an example of “Anti-Obama feelings” as much as its just a fringe, violent, extreme-Left hate group posting more of its posters in public (posters the TEA Party often gets blamed for)

I think California could be in play, although San Diego is reputed to be the most conservative part of the state.

In particular, I was surprised that the cigarette tax hike failed. The feeling I get from talking to ordinary people is that the state legislature has been crying wolf for far too long, without taking the budget crisis seriously, and they are not amused.

They’re still all Democrats, and they remain generous, but they do like to see some bang for their buck, and they expect competence in their government administration. For them, the inefficiency and ineffectiveness of the Obama administration could be a winning argument for Mitt Romney.

I wouldnt take the CigTax defeat as a sign of voting Republican. In the not too distant past, California has voted to: Ban Gay Marriage (twice!), Keep MJ Illegal, Death Penalty, 3 Strikes, Refuse Illegals Public Services, and on and on and on…

yet minorities are a sure (D)-vote every time when its a person, not a moral, on the ballot.

Minorities are Conservatives being shaken-down and paid-off by Democrats to vote for their candidates. Until that stranglehold is beaten, Democrats will not be. (when it is though, wow will this state ever go red!)

You summed CA up perfectly!

The only exception I see (in CA) is the Asian population who are very liberal on moral issues.

See, where Asians up North may be Morally Liberal, they are extremely Conservative in the south, and a big reason Orange County has stayed so unbelievably Red. Vietnamese and Taiwanese are about as Conservative as can be, with Vietnamese even being registered at a 55% Republican to 20% Democrat split.

Overall, the Asian vote in California balances at about 52% Democrat, with slight fluctuations. Those who came to escape Communism (S.Vietnamese, S.Korean, Taiwanese, etc) will generally vote heavy-to-extreme Conservative, while the others tend Democrat.

Ironically, Hispanics in Orange County vote Republican as well. One can only imagine it must be the product of Hispanics nationally earning incomes over 70K tending to vote Conservative, and the area producing more of that block.