Spotted by reader P.J., who’ll be moving to Albuquerque for love:

I’ll be moving there in a couple of years to be with my fiancé. Sadly, leaving a very conservative part of Colorado, but my sweetie is very much worth it!

The license plate prefix probably only is appreciated by those in the blogosphere. 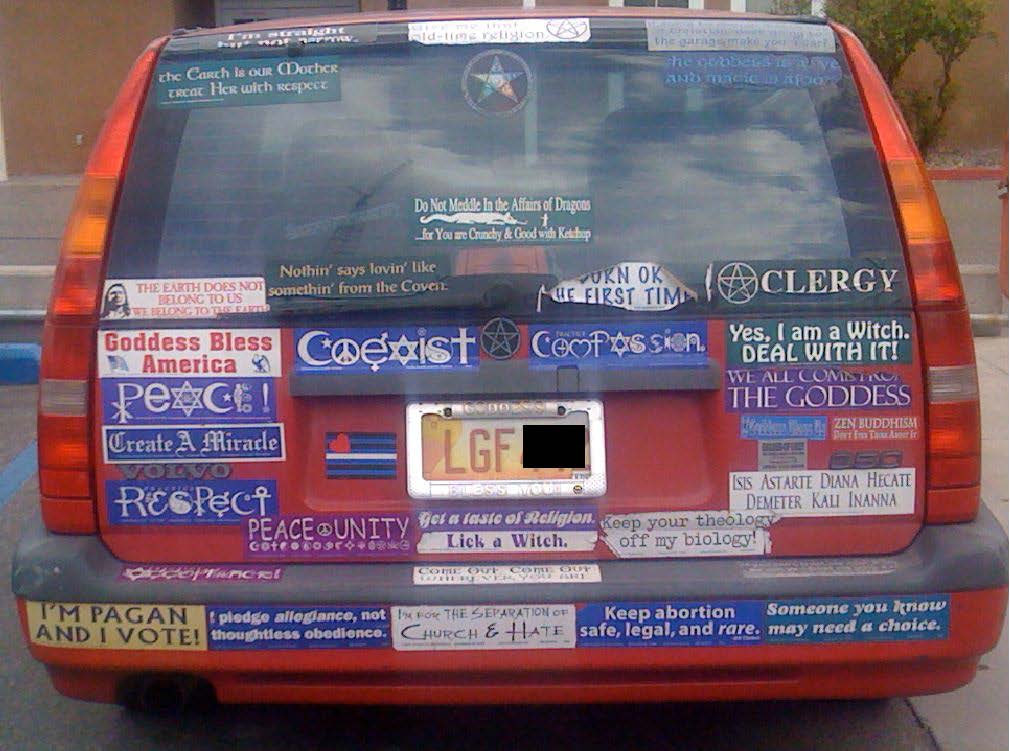 I guess the bumper sticker to the above right of the license plate is supposed to spell out ‘compassion’ but I read it as ‘confusion’. It makes more sense that way.

Yah, yah. A “witch” like Princess Running Bare is an Indian.

Note, though, the Collectivist sacrament remains the same…abortion on demand.

One of the stickers says “Lick a Witch”. EEEEWWW!

Sure it doesn’t say “kick a witch”?

Second sticker below the license plate. Looks like ‘Lick a Witch’ to me. Ew.

$5 says a neural scan would reveal this lady’s brain looks pretty much like the back of her car, a hodgepodge of flighty ideas.

LGF – I wonder if the woman who owns that car chose those letters? If not, how ironic!! 😉

Overall, I wonder what she really believes – is she a Wiccan, a Buddhist, or just an overall general pagan (Mother Earth and all that)?

Confusion is perhaps her desire. Leftist and lost, certainly so.

But of course we know who she will vote for – I wonder if she also supports that old slogan, “Vote early, vote often!”….

Chucky says: ‘I just washed my hair and fixed my pony tail, now I see this!’

The left insists on an ever growing government to force us into their “co-existence”. Their coexist theology might be better named “co-slavery”.

Redistribution of wealth and preferential treatment of preferred groups is REQUIRED in their commune, which they’d like to force us all to join.

The car seems to be parked illegally. The blue line on the left would be a handicap space, but there is no line to the right, as far as I can tell, and the pavement changes to concrete.

I think she should take a trip to the Middle East and see how well the communities there like to coexist with a pagan witch. I’m sure we could pool together the airfare for a one-way ticket.

I’m sure this has been covered before, but why should abortion-on-demand be rare?

It is almost as if they’re acknowledging some sort of moral dilemma associated with killing the unborn. Or maybe the utterers of that particular phrase are of the mind that pregnancy is an affliction…like cancer. But why offer pre-natal care in that case?

As an amateur in the abortion debate I’d like to know how the definition of what ‘it’ is changes based on whether it is desired or not.

There most certainly is a moral dilemma involved in advocating abortion rights. The obvious consequence of doing so is that some children will be killed before they ever have a chance to be born. Surely that’s a bad thing, and the only thing worse is to allow the government the power to interfere with that choice. That way lies the wholesale slaughter of the innocents.

The Roe v. Wade opinion contains a discussion of the consequences of a grant of power to our government, which is secular. If the government is granted the power to intervene in a decision, there is no way to ensure that the intervention can be limited to a particular direction.

The Roe v. Wade decision requires that any decision to abort a child must be made on a case-by-case basis, and always including the consent of the mother. So long as that case stands, our government cannot coerce abortions in the manner of the Chinese government.

Why get a custom license plate when anyone can get banned at LGF?

Off topic but related: Chuckles/LGF says conservative SWAT-ting is made up.

Pretty much confirms lefties. Take any liberal issue and ask your unknown a couple of penetrating questions. Once you have answers, you can pretty much project out his/her POV on all the other liberal hot button issues.

This one of course lets you know her POV quite bluntly. No questions need be asked.

To me, seeing all the flashpoints is natures’s way of saying KEEP AWAY.

Is “texting” legal in New Mexico?

The license plate prefix probably only is appreciated by those in the blogosphere.

“Get a taste of religion. Lick a witch”.

And people think some conservative Christian bumper stickers are bad?

I don’t understand how so many pagans and Wiccans are pro-choice, considering one of the basic ideas of their beliefs is that all life is sacred, (“An’ it harm none…”).

As a counselor, I’m inclined to believe that she craves attention. She also needs to live amongst a group that will affirm her, a further sign of insecurity. I find many achieve the same ends and satisfy the same needs by commenting on blogs.

I’m not a counselor, I’m a lawn guy, and the back of that Volvo (what else?) screams mental illness.

I see a car like that and I stay far, far away from it.

Me or the Volvo Witch.

I plead guilty, although I have an excuse. If you cut me I bleed Dursban insecticide.

“…and the back of that Volvo…”

The illiterate witch thought it was a Vulva…

I’d be embarrassed if I were a member of her coven.

Well, somebody’s gotta be consumed by the hellfire; I say better her than me. What these COEXIST and RESPECT folks will never admit is that Islam believes in neither coexistence with nor respect for religion. COEXIST and RESPECT are signs of weakness, of unbelief in one’s own faith. So, her silly little signs proclaim her lack of surety about and belief in paganism, about Wicca. Sweet.

Charles did yeoman’s work in Rathergate – it saddens me he’s gone round the bend. 🙁

Saying that, I left long before I could be banned.

I admit that I am “not a nice person”™, but I would be sorely tempted to surreptitiously find a spot for an Obama bumper sticker somewhere in that collage.

First, I don’t think that it would misrepresent her/his [there are male witches, so it is possible] political leanings.

Second, if he/she found it, possibly he/she is so addled that he/she would figure that the act of application had been lost somewhere in the haze.

Third, with an Obama sticker, the car is an effective rolling billboard advertisement for Romney to anyone not already hopelessly lost to the Left.

Do not try to ignore the Enemy’s Chiroptera Lunarii; tie the Enemy to their most egregious idiocy in the public eye.

I find it most interesting that there is not an Obama sticker on that car — either from 2008, or currently. I wonder why not?

It looks like some dastardly Republican sneaked one in there.

Bumper Sticker Therapy. A $5 bumper sticker beats hell out of the $25 co-pay.

I’ll also wager that the driver of this van is either on public assistance or is a teacher. And… New Mexico is not called the Land of Enchantment for nothing.

Cars like this result in my driving right past whenever i see them stranded on the shoulder of I-77. do it yourself or call AAA you nasty patchouli-stank crystal bitc# from hell!

To say “keep abortion safe, legal, and rare” involves the same sort of dissonance as would telling a serial killer if he keeps his number of victims low, everything’s cool with us. Whether abortions or murders, if too many is bad, what’s the cut off number? And if 2x or 4x or 10x is bad, isn’t x bad? And if x is bad….

Those bumper stickers are all that is holding the car together.