Dems stick to what they know in Wisconsin

Dems stick to what they know in Wisconsin

Class warfare worked didn’t work so well for Democrats in Wisconsin in the Scott Walker recall.  But they’re stiking to what they know.

The Democrats are engaging in another campaign, this time dubbing Romney’s bus tour the “Middle Class Under The Bus Tour.” (h/t JeffEmanuel) 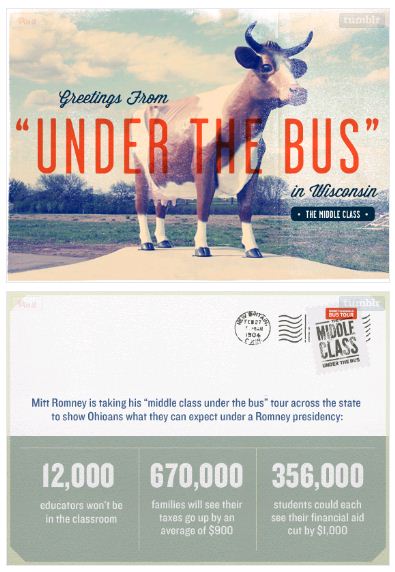 Because we all know how well the middle class fared under the big fat wheels of the Obama bus. They might as well add 120,000 kittens kicked to their list of bogus statistics.

Good catch Mary Sue! With so many debacles to their credit , we forget the Made in Canada , billion $ or whatever cost “BUS” Obama utilized to go into town , then when finished with photo op , exit stage left from town tour earlier this year in Ohio etc. THAT raises the question ‘WHERE B da BUS !!’

That poster is just stupid. They project all of the jobs that will be lost under Romney out of thin air.
Meh.
Another losing campaign for the Dems.

Par for the course with this crowd. Remember all those imaginary “jobs saved” a while back? This is the same “thinking” at work.

Twenty kibillion jobs lost in a mindless projection, versus…

the reality of the last 3.5 years.

Yeeeup, that’s gonna be a BIG messaging coup for the Collective!

Good grief. Is that the best they can do?

But, as the Instapundit wisely says, “Don’t get cocky”.

Yes, they’r doubling down on that success they experienced last week with the recall!

“The Wisconsin Democrat Party– Stuck on Stupid Since 1848”

Chicago teachers are willing to take themselves out of the classroom, if they don’t get their average pay raised from $71,000 to over $90,000. Remember that is for nine months, with a fat pension at 55.

And this while the economy is slow, and Illinois is $85+ billion overdrawn, mostly due to gargantuan promises to buy union votes. Education costs skyrocket while results plummet, because unions can coerce politicians into selling out “We the People”.

The teachers want to take back Chicago for the unions
http://fwd4.me/13E6 (image of their march)

I say, let them walk, replace them with unemployed veterans that fought for freedom, rather than teachers that hold kids (and politicians) hostage for their school monopoly and entitlements. An army of vets could remake the CPS disaster, and kids would have a chance at real learning.

Obama’s school bus has a bunch of drunk (with power) teachers on board. They ran over the kids, then ran in the ditch, but are still partying like its 1999.

“12,000 educators” could be saved by reducing total compensation of public employees across the board. There’s also the question if “educators” should be public employees at all. There are only exceptional reasons for government to be their employer and they revolve around a large and progressive welfare class.

“670,000 families” have already seen their taxes implicitly increased by virtue of the “stimulus” programs and the trillion dollar deficits run by the federal government. Actually, this is a punitive tax upon all Americans that has been imposed largely without representation.

“356,000 students” could see their total education expenses decrease as taxpayer funded distortion of the market is mitigated. The same correction would be necessary to realize health care reform.

One cannot help but appreciate the virtues of redistributive and retributive change. It has been a principal cause and effect of progressive corruption. It’s a self-sustaining degradation of individuals and society.

When all they understand is class warfare, that’s all they can respond with… If they ever learned something about Austrian economics, military power and it’s use, or the free market, they could grow into human beings and possibly contributors to the wonder that is the United States.

It’s more basic than that. Their strategy is to conduct extortion through emotional appeals in order to consolidate wealth and power for, ironically, their individual consumption. For the opportunists and vulnerable they offer promises of instant gratification (i.e. physical, material, ego) without consequence. They are the ultimate “capitalists” in the sense that they pursue establishment of monopolies (i.e. authoritative) and monopolistic enterprises.

The GOP should come back with:

Eats, Shoots & Leaves. After all, the small-business restaurant owner, with three restaurants, earned over $250,000 a year.

Are you paying attention, Romney campaign?

I found this to be very moooving.

I wonder how many of those “670,000 people who will see their taxes go up by $900/year” will also escape union dues of $800/year. Thirty-four percent of Wisconsin teachers have already opted out of the union. They’re taking their money and going home.

Funny how the pesky details escape these fools.

“The Democrat Party:Stuck On Stupid and Damn Proud Of It!”

OK…THAT is just crazy. Obama going to war with the Supremes would be the icing on the cake.

The Collective is looooooosing it…

When I think “under the bus” I think Obama. And who said they could use my relative’s image for their promotion!

Can we get an edit on the 1st paragraph?

Why does Obama’s Logo Look Like A Big Zero On A Highway To Nowhere?

If they are a known atheist liberal, tell them:

I support the separation of Atheism and State. Otherwise I am offended.

The Democrats know that the second most effective political message – just behind ‘elect me and get a handout’ – is fear.

If FDR were alive now, he’d have said, “The only thing we have to fear is Republicans throwing grandma into the street, starving children for profit and replacing our hardworking, selfless public employees with trained chimpanzees!”

Why is anyone talking about Police or Fire Fighters losing their jobs? We should be talking about the Billions upon Billions wasted on stupid projects like Solyndra and the wasteful Departments, like Energy, Education, Commerce, Labor, HHS and their sub fiefdoms. They are nothing more than a drain on the Taxpayers and produce nothing but paper pushers and partiers.

wasn’t WI slated to lay off 12-15000 teachers over next 2 years prior to walker stepping up?
seems to me we never hear how all those layoffs were prevented.

boy, is the left in “meltdown” mode or what? my bats#!t crazy uncle posted some lies about unions of FB the other day, I asked him to comment on the WI recall effort and quoted a couple of stats….he put me in “time out” and unfriended me!

um, not “unions of FB” but rather “unions on FB”

May I suggest they stop trying to suck on the teets of this fine creature.

Just remember, to the vile left labor unions are the holy grail. To these collectivists, labor unions are the salvation of mankind. What’s more, public sector labor unions are the proletarian vanguard, able to use their fictitious “right” of collective bargaining to override the will of the voters at any moment and for any reason. The Wisconsin Rebellion kicked their fat lazy asses. Don’t think for a second that in their hate-filled little minds they don’t think of this event as being like Israel marching into Mecca.

They are out for blood and revenge. And we all know labor union thugs are very comfortable with all manner of violence.