From reader and frequent photographer Jason, taken a couple of weeks ago in Raleigh, NC: 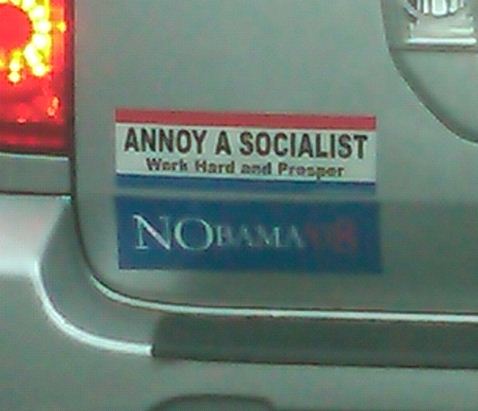 With the Communist nature of Obama’s reign, the beast many Americans had not been looking at left the wings, entered stage left and continues to stand stage center, dominating it.

With the ugliness and greed of this monster, which has devoured millions of lives and trillions in treasure, now fully displayed to those who have long flirted with it, foolishly believing that a kiss would turn it into a prince, perhaps we may see the end of the long march through our institutions and society. Unemployment is a huge wake up call. Blaming the other guy doesn’t work.

Still, there are some who will wonder if someone more effective than Obama, the Communist Party’s dream and America’s nightmare, can realize the the kiss and conversion of the beast.

Well, Obama was their man, and he came at the right manipulated point in history, and he had the CPUSA in Congress with him cramming their anti-freedom agenda, forcing serfdom down our throats. He also had the unions and the rest of the CPUSA apparatchiks from Van Jones and Valerie Jarrett downward. Yet, what has happened at every step? Failure after failure after failure. Even when they succeeded, they failed because their success enabled the unveiling of the beast.

Now we know that they hate our values; they want us impoverished, homeless, hungry, fearful, and dependent upon them. Now we know the true nature of the beast, and we are not enchanted.

As some woman the LSM deems irrelevant once said, “Mr. President (and your beast), game on!”

Socialists love it when others work hard and prosper – that’s more money for them to lay their grubby little hands on: from everyone else according to their ability, to themselves according to their need, don’cha know. Perish the thought that they should get any dirt under their fingernails.

You’re right, Prof. J – the trick is to get the socialist off his behind and get him to work harder.