Time Magazine wants attention, and it is getting it: 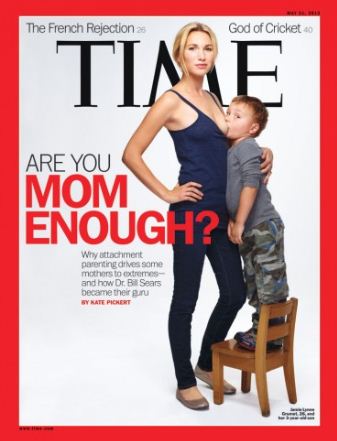 I will fight to my dying breath to preserve the freedom of the depressed former titans of information to run “don’t look at that car wreck on the side of the road” covers.

And to engage in a bigger mommie war, as detailed by Noah Rothman at Mediaite, ‘Mommy Wars’ Heating Up: Time Magazine Vs. Ann Romney:

The “mom wars” are in full swing; they join gay marriage, birth control and 1970s-era toys as the latest in election year non-issue cultural battlegrounds. If Democratic Strategist Hillary Rosen’s comments in April represented the “mom wars” version of the firing on Ft. Sumter, today’s salvos are the Peninsula campaign – a brutal and ultimately failed assault that heralded a long and bloody war. The latest volleys were launched by both Republican candidate Mitt Romney’s wife Ann, who wrote an opinion piece in USA Today celebrating motherhood, and Time Magazine’s releasing a sensationalist cover piece showing a young mom breastfeeding a boy well beyond toddler stage….

Furthermore, unemployment claims dropped by 1,000 claims from the previous week, the lowest since March. That said, they are still at 367,000 new claims for the week ending May 5. One would think such good news for the Obama administration on the economic front would merit some focus – unless, that is, it would take voters focus off the culture wars they have fostered since January and would force voters to actually take stock in the state of the economy.

Hey, did you know that the United States’ reached a milestone trade deficit today, hitting $51.8 billion or 14.1 percent? If you did, you are what they call a “reader” and are not welcome at the debate table, thanks very much.

Given these facts, it makes more political sense that we have a national conversation about the virtue of breastfeeding.

I just hope that’s a male chil’, and not the next Chaz Bono…

That’s the biggest WATB I ever seen.

Was the model on the cover arrested for pedophilia? If not, why not?

That’s the kid’s real mom. If you click thru there are pictures of others doing the same thing.

There’s nothing remotely prurient about that picture.

My Great Uncle Walter had a lamp depicting a Chinese lady giving suck to an old beggar (this was the ’50s). A pure act.

I was fascinated by that…fer some reason…

You a ‘orrible, ‘orrible man.

It reminds me of the scene from “The Last Emperor” her the young (about 11 year old) Emperor uses the services of his “wet nurse.”

I guess that the cover to some extent “worked”: Thanks to the blogs I read, I have been successfully reminded that Time magazine still exists. I’m still not going to their web site, though.

I feel sorry for that kid. He may be comfortable being shown on the cover like that — or maybe he’s too young to understand — but I can guarantee he’ll have trouble with kids at some point. Kids can be very cruel. The mother has opened him up to future abuse.

I saw your comment after I posted mine. But I was in a hurry. Had I seen it, I would have posted DITTOS.

At least they airbrushed out the umbilical cord.

He looks old enough to be at least in pre-K so I’m sure the ridicule has already begun.

Mom could care less! SHE’s on the cover of a national news magazine, and that’s ALL that counts.

Where is the father?

And on what is he sucking?

You owe me some Meow Mix… and a new laptop!

Isn’t the picture a perfect analogy to a “kid” being covered on Mommy’s health insurance until he’s 26?

Maybe that will “evolve” to “kids” being covered until they are 36.

I think this picture is even better 🙂

When I had my daughter in 1993 I was a big fan of John Rosemond who had a column that ran in The Providence Journal. He’s a proponent of the “benign dictator” school of parenting. Rosemond was a skeptic when it came to ADD and ADHD, instead liked to use the term “willful child”. He used his own son as an example of a willful child and how kids can rule if parents let them get away with their natural tendency to be selfish little tyrants. His columns were always entertaining, sometimes laugh out loud funny.

It’s pretty much the only downside to capitalism I know of. Conservatives want to get paid for their ideas. Liberals give it away.

I remember Dr. Rosemond. You’re right, he’s great. He believes in making the kid responsible for his own actions.

Conservatives tell you the price up front, show you the goods and tell you of all the hooks. Liberals tell you what they peddle is free and then they rake you over the coals after the purchase.

THere definitely are willful children with whom you must do battle . They can bring normal well meaning people to the brink .

Maybe there are 2 stages . <3 -there is not much you can do in todays disciplinary rules. At 3 you can pray they gain some self consciousness about their behaviour. It helps to bring in extended family members as the parents are usually crushed by this time.

If the behavior goes on after 4 the child will be sealing its own fate by social exclusion. God help you if you ever have to deal with the govt child industry.

Wouldn’t this qualify as child pornograpy?

The women I have known who flaunt their breastfeeding for all to see don’t usually look like this!

Breastfeeding an infant is one thing, but this appears to be, at best, contributing to the corruption of a minor or, at worst, an incestuous relationship.

Well, whatever the circumstances, it does reveal TIME’s paedophiliac fetish.

Well, that confirms it. Newsweek has for long shown that it is one and now Time also confirms it’s just another another journalistic print boob in the same mold.

Both of them trying to keep abreast of current trends, but together proving to be nothing more than a total bust.

Gives a new meaning to being on the news rack…

Family portrait of journalism and politics?

Yes, some would think this child pornography.

All I can say is, way too old for breast feeding. I hope
the child has a normal development.

“It would be better for him if a millstone were hung around his neck, and he were thrown into the sea, rather than that he should cause one of these little ones to stumble.”

The first thing I thought of was how this was considered normal for male children in traditional Arab culture, and the effects it does have.

One is that because male children continue to be given teat on demand well into an age when they can actually ask for it, they are indulged in a mindset both of entitlement to having their demands met, and one of expecting things to be happen/be true just because they’ve said so. (Something which certainly reinforces the already toxic tendency towards pathological lying and magical thinking inherent in shame cultures.)

Another is that in order to indulge male children in this arrested infancy, female children are traditionally cut off from breast feeding as soon as possible with little regard for their own development – setting an example in the earliest stages of life that to be female is to be inferior to any male, with even the latter’s most selfish whims “rightfully” taking precedence over even the basic needs of the former.

This is actually an unconscious cry for help by TIME’s editors. Save us from our progressive depravity. Well, acknowledging they have a problem is the first step to their recovery.

It’s refreshing to see that this mother’s views on the weaning process are evolving.

Calouste Gulbenkian would have loved it, R.I.P.

TIME is just giving lip service to women’s issues while promoting “mum’s the word” about Obama sucking the life out of the economy.

There is SOOOOOooooooo much mockage to work with here!

When he is old enough to shave, that prickly beard and mustache is going to be ticklish.

Taking mom to lunch will have a totally different meaning when he has his first job.

Taking Mom “out” would have a special meaning…

Under ObamaCare, teething doesn’t begin until the age of 22.

I’m surprised the Left isn’t expressing all sorts of outrage and calling for this child to be taken away from his mother.

No, not for the breastfeeding… for wearing BDU pants. The failure to discourage the child from anything to do with the military is surely tantamount to child abuse.

Oh, wait, I forgot… there’s a Democrat in the White House. Never mind.

IO the long-term breast feeding mom are doing it for some perverse need of their own , not for the child. There is no reason a child that age needs breast feeding for nutrition purposes. If they are pushing it for emotional purposes ot strikes me as an example of parenting that hasn’t helped a child learn any social skills and is delaying normal development.

Is this how adult-babies are made?

These distractions are the reasons that CALIFORNIA DEMOCRATS ARE WRITING IN MICKEY MOUSE FOR 2012 PRESIDENTIAL NOMINEE in our June 5th election. There are 6 solid reasons Mickey Mouse is a better choice than Barak Obama, and we want to see write-in percentages on par with those of New Hampshire, North Carolina, and West Virgina!

I don’t find B/F to be a left/right thing at all. I know a number Evangelical Christian moms who B/F their children (baby food as God intended).

The theory behind long-term B/F is that at six months old, the child will receive about 50% of his/her nourishment from mother’s milk. As the child continues to mature, gradually that percentage declines. By the age of 3 years, the amount B/F has decreased to perhaps 5 minutes/week. Indeed, this was the norm until the advent of store-bought baby food.

That was very funny. The pic is icing on the cake.

Uh, didn’t know this had become a spectator sport. Can we look for this to be on the Olympic Games venue in 2016, or 2020 at the latest?
Got to run . . . suddenly have a strong case of the munchies!

Isn’t this a perfect metaphor for the entire leftist project – fostering and maintaining dependence to facilitate control?

Perhaps they’re just auditioning for the next season of Game of Thrones.

The kid thinks they are balloons and is trying to blow it up.

That’s not a women-no less a Mom.

I find it appalling-deeply offensive-and beyond what mere words can describe.

My ire is not restricted to her, or the person that needs a good belt in the mouth for publishing this-

Now that I’ve read through the comments-

I find nothing remotely humorous about this-

Kinda ashamed at some of you-

In the 60s there was big trouble in New guinea. Canberran white collared public servants were sent up there to do sumthin about it.

Remarkably they got together a representative govt system & even largely eradicated cannibalism.

One custom they were unsuccessful at was the practice of village women suckling their pigs.

From my Stanley Ann Dunham / Mrs Helen Ibbotson COOK Jessup /Ford Foundation Art & Anthropology of Indonesia & Nearby Natives scholarship , I am setting off to LA to research this new Tribalism.

Just in time for Mothers Day.