Signs are popping up all over.

This is not a bumper sticker, but traveling along the coast in southern OREGON, we came upon this rather large sign. The small town seemed to be struggling. 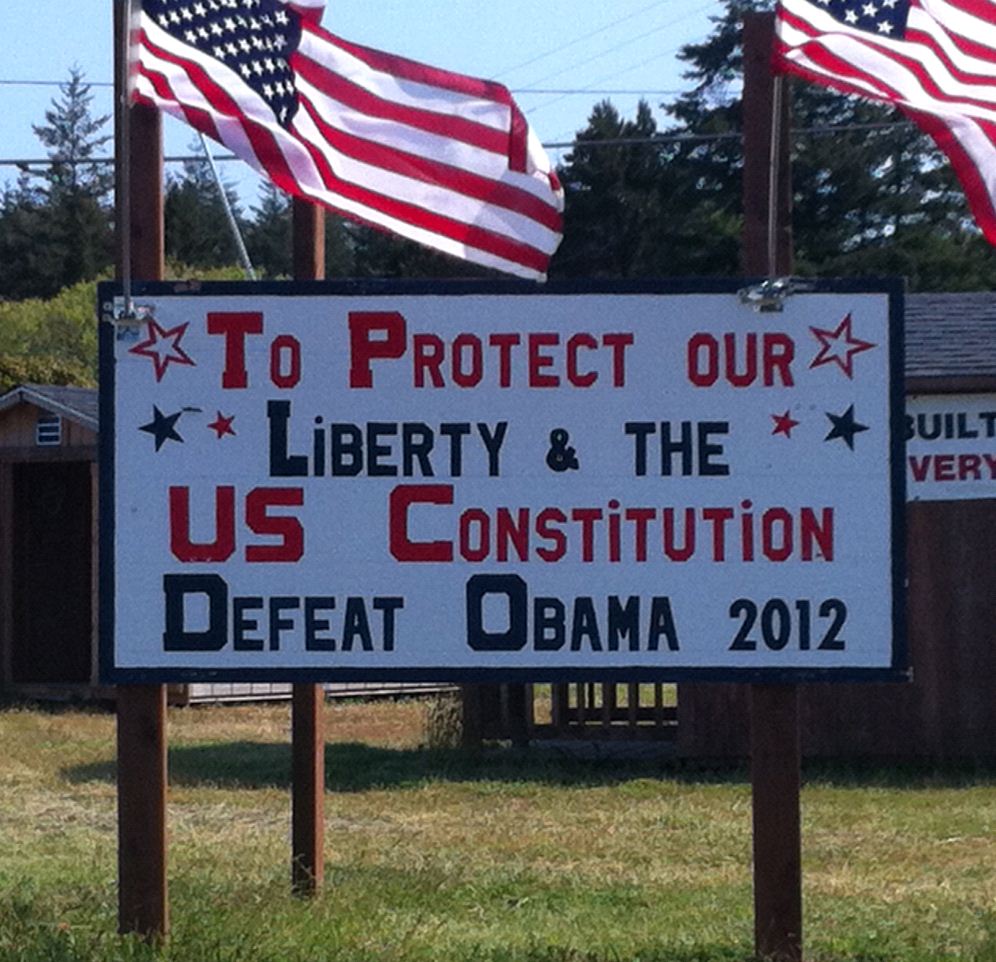 Drove by it again today, and the opposition has painted over “Obama.” Unfortunately, we leave for home tomorrow, so we’ll be unable to monitor this battle. People here have told us this sw part of Oregon tends to be conservative, while Portland and the college towns are the liberal parts of the state. (The sign is in Port Orford.)

If this were in my home area I’m sure the sign inspector would be writing it up for being without a permit.

My son and his family live in Portland, and he said the same thing about Portland being very liberal vs. the rest of the state, which is more conservative.

Well, that’s all the liberals can do since they don’t have a record that they can run on so resorting to lies, cheating, obfuscation and vandalism are the only remaining choices.

Yeah… I’m starting to feel more confident of a November win that sees all of the current administration exiled back to Illinois. Amen!

I have some background on that sign in Port Orford. We just completed a primary election for county commissioner candidates. A vandal changed the “defeat Obama” to “defeat David Smith.” Mr. Smith is one of the two in a run-off for the non-partisan county commission position in the November election. The sign owner painted it over until they can stencil in Obama again. Also, the sign is on private property and is not regulated by the City, so no hassle from that end.

Maybe they need a webcam? Perhaps the culprit is a CNN guy…
http://news.yahoo.com/blogs/abc-blogs/former-cnn-executive-caught-putting-dog-doo-neighbors-051918102–abc-news-topstories.html

Those liberals are Soooo tolerant of opposing viewpoints.

I should send you weekly pictures of the billboard near Chehalis Wa…they’ve always got the best conservative 1-liners.

Perhaps if a reader who commutes the I-5 corridor can send it.

Angie and Rosalie are spot on.

Portland is basically a monoculture, 75% liberal and pro-Obama. The northwest coast of Oregon (Clatsop and Lincoln counties) went for Obama, as did ultra-liberal Lane (home of the University of Oregon) and Benton (home of Oregon State University; since OSU is the Ag college you’d think Benton would be more conservative, but it may be wackier even than Eugene).

That sign would have been ripped out of my front yard here in Eugene.

There’s some blueness in the state down around Ashland (lotsa California transplants and artsy-fartsy types, home of the Oregon Shakespeare Festival and Southern Oregon University), but Jackson County itself is pretty red-state overall. Hood River County smacks of some liberalism, as it’s an Eco-Tourist/Windsurfing Cool Place.

Then, say, travel out to the Oregon Outback of Harney County, 10,000+ square miles and 7,500 people. Just about the only people who vote Democrat there are the federal workers (Bureau of Land Management and Malheur Wildlife Refuge (F&WS)). Even county and municipal employees vote Republican, they tell me. Believe me, it’s Paradise! Heh!

Mike, I visited Eugene a couple of years ago and have to tell you that for this Midwesterner it seemed like another planet. I couldn’t eve fill my own gas tank.

I guess it’s all relative.

To be fair…The Obama support sign at the Post Office entry, also on private property, has been defaced to say No Obama as well as other negative additions. I have not heard any whining from the left side. What strikes me about the sign, pictured above and installed by the local veterans, is it’s negativity, lacking any support for the Republican candidate.

Remember, folks, lots of the states are hybirds of red and blue. Eastern WA is nothing like Seattle; the Central Valley nothing like the coast of CA, and the rest of Vermont not like Burlington. I live in MO, where St. Louis and KC are like foreign countries to those of us in the rest of the state. (Well, there IS a small, leftist contingent in Columbia, home of “Mizzou.”) And when I lived in OH, the cities and the rural areas were practically aliens to each other.