I have tweeted about this before, but tonight there were at least two anti-Santorum ads run on Fox News by Restore our Future, the pro-Romney PAC.

It’s the Big Spender ad which now has been taken down from YouTube, but still plays on national television: 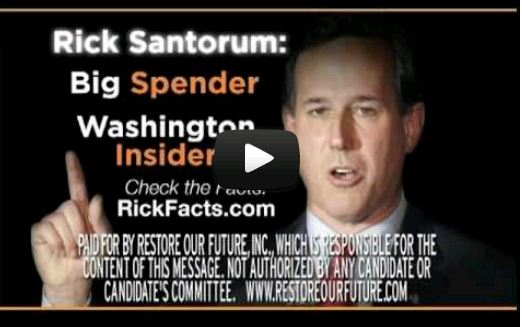 Will you stop already.

I realize you probably made the media buys long ago, but change the ads already.

Update 6-1-2012 – I was contacted by a media buyer for ROF, and they believe it was a local cable problem which they will look into and fix.

Isn’t that the “Rove” group? Do I say I like him better than Rollins?; …that’s not a compliment.

This is yet one more reason why I am NOT voting for Romney.

Have you ever run down a hill, and tried to stop quickly?

Momentum is a powerful force in physics…and advertising.

I think the physics term you are looking for is “inertia” rather than “momentum.”

They are too busy running down conservatives and they don’t ever intend to stop.

Momentum: force or speed of movement; impetus, as of a physical object or course of events: The car gained momentum going downhill.

Easier said than done. The site offers visitors the opportunity to sign up for emails and, of course, to give money—but not to contact the owners.

In contrast, the Romney site does have a contact page.

Sounds like T. Coddington Van Voorhees VII (“Together, I Shall Ride You To Victory”) is running Restore Our Future.

In addition to wasting money on outdated ads, it is extremely negligent of ROF to be doing something that stresses the coalition by annoying the members who are most ambivalent about Romney.

I expect the money was already spent, so it was not wasted.

But your second point is right. They should have some good stuff on Obama to run in place of their old Sante piece.

I expect it fell off of someone’s spread-sheet, and was lost in the scuffle.

Off topic: Storobin wins! After more than two months of counting, David Storobin finally won disgraced Democrat Carl Kruger’s seat, and becomes the first ever Russian in the state senate, the first ever Republican from that area, and the first Jewish Republican from Brooklyn in many generations. Unfortunately he’ll have less than a month to sit in the senate before it dissolves, and in November the district will disappear.

Professor, I worked in this industry(commercials) and I believe that once the time is bought and paid for, there is not much that can be done to change what the station plays unless they are sent new footage.

Obviously a stupid mistake made by the Romney team buying the ad time.

So send them new footage! There is no valid reason why that could not have been done.

Put this under “ALIENATION.”

If Romney is really against big government spending that’s a positive position and one he must promote and abide by. I imagine even Rick Santorum wouldn’t disagree that spending must be cut.

But, that being said, anti-Santorum ads seem so outdated, whether accurate or not – who cares at this point in time?