This Pow Wow Chow thing is paying off for me

This Pow Wow Chow thing is paying off for me

I’m sorry I have neglected promoting items from the Tip Line, it’s just that I’ve been preoccupied with coaxing the genealogy from the bottle.  And staring at the sky waiting to see if a shoe drops from the heavens.

Here are some items which deserve attention:

I interrupt the Tip Line promotion for an important announcement: 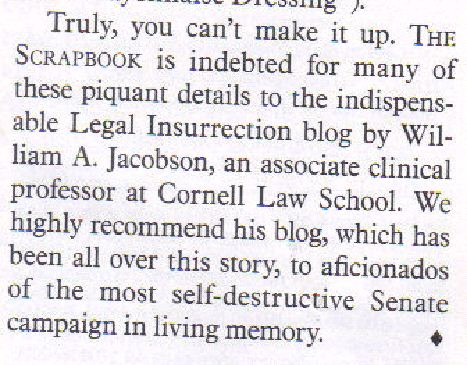 I am absolutely dumbfounded how such a stupid story about someone calling themselves a cherokee could bring down a senate candidacy??? In my home state of CT, you don’t even need to be related to a tribe to join one. The Pequots were all wiped out hundreds of years ago to a child and they now have their own casino??? Just amazing.

For some reason I assumed that the Tip Line link was to just drop a line to the Professor as a heads up on a story and had no idea it was a running thread that anyone can read. D’oh.

Now I’m curious where that LI Daily News link will take me. Dare I click it? I like a little mystery. Maybe I’ll save it for a special occasion.

(Nice shout out from the Weekly Standard!)

Readers provide links to a lot of good stuff in the Tip Line that don’t make it to the LI front page. It’s worth glancing over it when you have the time.

Nice. You should do a reader party pot luck in Ithaca and everyone can show up and do a Pow Wow Chow recipe. I hear Cole Porter and the Duke and Dutchess of Windsor really loved them on the Trail of Tears!

Since the future of coal is one topic, a visit to Friends of Coal is in order. Lots of good stuff there, but none better than the “If I wanted America to fail” video. Worth your time.

From Teabagger to promoting the teabagging lifestyle

I saw that and simply do not know what to make of it. It may be photoshopped, but if not I am curious of the back story on it.

The Herald’s caption below the photograph read:

In 1997, Obama was beginning his first term as a state senator in Illinois. He and his fellow politicians were asked to lead the “4th on 53rd” parade, which is Hyde Park’s 4th of July celebration–one not too different from many other places in America, it turns out. All the politicians who attended were expected to dress the part.

The Herald even published a story the week before, on July 2nd, confirming in advance that Obama would be “wearing colonial attire.”

@Ragspierre, I found the pdf in your link to be a very interesting read. Thanks.

Thanks! Civil asset forfeiture laws are OUTRAGEOUS…and at the same time, kind of interested if you are a student of the law. They derive from admiralty concepts, where a vessel is an artificial person.

They have become modalities for tyranny in modern America, at least as bad as the worst “takings” abuses.

Part of the very high cost of the War on Drugs, and something we must reverse.

1. Ragspierre is worried about Civil asset forfeiture: Government piracy and you should be too. Rosalind J is.

Good for Rags and Rosalind. If memory serves, I have posted some choice words about conservatives who rationalize misbehavior by law enforcement. I am tempted to add much choicer words right here right now, but my immediate thought is to not disturb the coalition until after the election. I may change my mind.

The worthy Radley Balko cites the MA motel as one of three egregious situations. Hot new law enforcement idea: require (improperly) that a defendant’s supporters bring bail in the form of cash, and use a “trained” sniffing dog to seize the cash.

2. Several NYS republicans have introduced a bill that bans all anonymous speech online.

Whether or not the bill passes, I hope every single one of these clowns gets primaried. If they survive, give them third-party challenges. Some things are more important than holding seats for the GOP.

3. A lot of work will be needed to restore limited government even after, knock on wood, Obama is removed. But first things first.

The Agitator has been railing about civil asset forfeiture for a long time (and rightly so). Rags should, if Radley has not posted it yet, post it over there too.

I totally agree with Rags that we need to give a good hard look at the civil forfeiture laws in theory and in practice. I defended against a couple of these in the old days, and hadn’t given much thought to these laws lately. Revisiting the issues again in light of the rise in other government encroachments, e.g. Omanacare mandate, the bad economy, Obama’s socialistic redistribution, and so forth, it’s very disturbing.

There’s one thing that I have never understood about the Brett Kimberlin story, and that I’ve not been able to find an explanation for: why isn’t he still in prison? I understand that he was sentenced to 50 years, got out on parole but had that revoked, and then got out again in 2000. But how did he get out in 2000? Was it parole again? Or what? And if it was parole, how did the board fail to make regular payments to his victim’s widow a condition, considering that that’s what got his last parole revoked?

Oh, and when was federal parole abolished? I’m pretty sure it was before 2000.

“Several NYS republicans have introduced a bill that bans all anonymous speech online…I was told the bill was introduced because Mr. Murray was cyberbullied.”

Maybe it’s time for Mr. Murray to grow a cyberpair!