It was a blow out, more than anyone expected.  At latest count it looks like a 20 point win.

Mourdocks victory speech was great.  I’ll post it when it is available.  (Now available at Right Scoop but no embed)

For now, you’ll have to do with a photo: 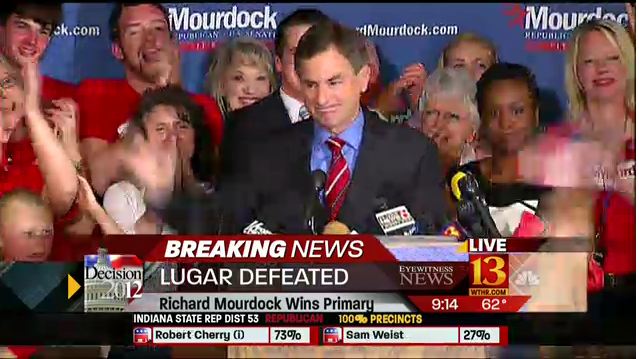 Looks like Tom Barrett, Mayor of Milwaukee, will go up against Scott Walker in the Wisconsin recall.

North Carolina passed a constitutional amendment enshrining one man – one woman as the sole recognized marriage.  The margin was large (about 60% in favor) and the turnout was unusually large for a primary election date.

Good riddance to an old dinosaur.

Lugar has donated himself to the new Koch Dinosaur & Fossil wing at the Smithsonian .He will be displayed in a atmospheric controlled display Tues -Thursdays 11-2 .

Joe Biden is booked for Fridays .

JackRussellTerrierist in reply to BannedbytheGuardian. | May 9, 2012 at 4:01 am

The man can’t control his age. What he can control are his actions in connection with the people who invested faith and money in him. That is his failure, not his getting older.

BannedbytheGuardian in reply to JackRussellTerrierist. | May 9, 2012 at 7:39 am

Oh ok -They can go to the Hall of Near Extinction where age is not the factor. After all America is on the Threatened list & it is not that old at all.

Noticing MSM–and I include Fox News-

There’s a lesson in this.

Are you listening, Mitt Romney?

Should Walker prevail, that lesson will be resounding.

You’re comparing a Republican primary in Indiana to the national Presidential election? I;m not sure about that.

ok I’m sorry. Now I realize you were talking about Wisconsin.

In the NC primary for president , almost 200K voted “no preference” vs. BO!

Interesting here with the WI Governor Primary – Barrett (D) to face Walker (R). (which was predicted). Looks like Falk didn’t even carry her liberal bastion of Madison.

Walker was basically unopposed and he has 97% of the vote.

With 51% in, Walker has 330,025 Wonder what that shows, considering Republicans really didn’t need to get out and vote.

I demand President Obama pull the DNC from Charlotte, publicly condemn NC for its bigotry, and refer it to a war crimes tribunal. NOH8!

Let’s face it: if the DNC holds their convention in NC now, it’s tantamount to embracing Pol Pot on a mountain of skulls. NOH8!

I didn’t realise prisoners could run for office.

I was impressed by the Shuttle service advertised on the webpage . Now that would be a cool way to spend a day . I wish had seen that when I was in in WV. They could have found someone up for visiting.

Next visit it will be a cert.

Bye Bye Dickey. Senator Lindsey Grahamnesty, are you paying attention tonight in Indiana? 2014 is coming up soon enough for Lindsey, we surround you.

The lugee has been discharged.

This is cool and all but wasn’t there a tea party underdog Senate candidate in Florida who now is pushing amnesty and who opposes Arizona? Murdoch will join the GOPE before he is sworn in.

Thanks for the uplifting comments.

Are you referring to Marco Rubio?

We are never going to agree with anyone 100% of the time.

Tell us about your perfect candidate that will never be corrupted. I would like to vote for him/her.

Nope. Jesus Christ is still not going to enter politics.

[…] his complete disregard for the people, with whom he had chosen not to live more than 30 years ago. Professor Jacobson put it this way: It was a blow out, more than anyone expected. At latest count it looks like a 20 […]

Hmmmm, There is something in the water…

[…] and economic issues. (To get a sense of how Tea Party folks felt about this race, law professor Bill Jacobson's site has a post-race post and more). But Indiana is a state where outdoor sports rule, and Lugar even cast anti-hunting […]

[…] up over the last few weeks, especially with Sarah Palin’s endorsement of the challenger. Mourdock won with about 60% of the primary vote and has a good chance of winning in November. Incumbency is […]

Yeah. The Tea Party is dead.
Hee hee.
You ain’t seen nothing yet, Republicans.

LOL…. I think Walker is a lock in June

Game Over In Wisconsin …. Walker Likely To Keep Seat.

* SIGH * …I really hate those commies in Madison

Mourdock gave a classy speech, especially liked his reach out to Senator Lugar. So, now the question might be whether Indiana allows write-in votes and then whether Lugar would pull a Murkowski in the general?

Still, maybe Romney will read the Tea Leaves and begin to get religion about how his campaign should run!

I’m not sure about that. He can’t be a candidate, but is there anything preventing people from writing him in?

Given his 20% loss, an attempt at that seems highly unlikely. Murkowski was very close in her loss, which is what spurred her to run indy – same thing when Joe Lieberman ran and won. She also was looking at many more years ahead of her in a political life than Lugar is.

It doesn’t matter much about his campaign. In the long run, Mitt will always be Mitt no matter what he says or does during his campaign, and it’s a crying shame that he’s the likely nominee. Of all the good people, we’re ending up with a vicious, lying, back-stabbing, fair-weather, flip-flopping, suede shoe boy hustler. Pathetic.

The problem is that he gets a lucrative pension, medical care and will still be called “Senator”. Pour me a big cup of TEA.

Maybe before if his DUI 79 year old wife drives him.

It now looks like I will retire in NC. The weather is calmer than Chicago’s and Asheville is a beautiful area. I love sourthern cooking, there’s great barbeque and seafood all around and the sanctity of natural marriage remains, at least legally, intact.
Look out Andy here I come.