Guessing the Kerry-Edwards sticker has been removed after jury started deliberations. 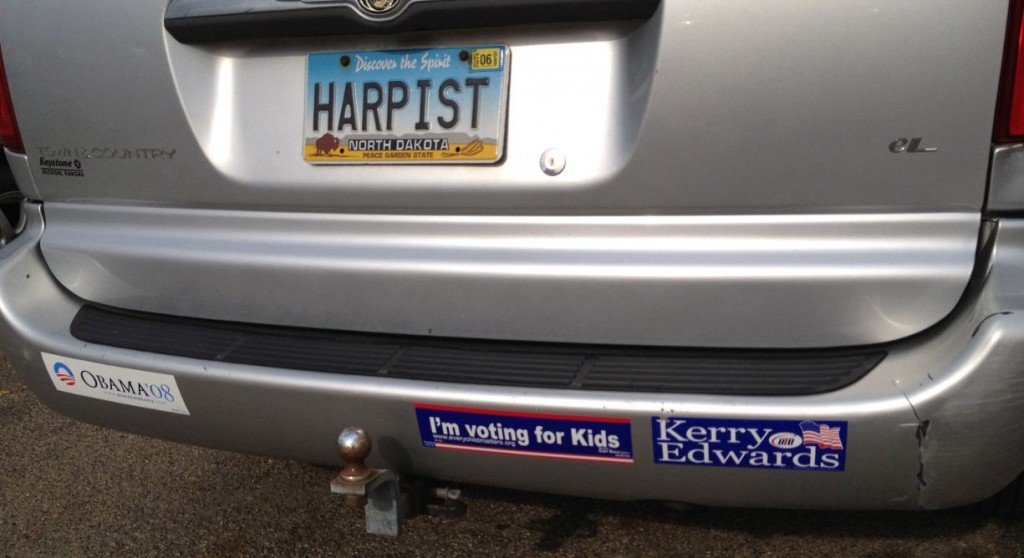 I suppose gobs of harp music and snorting pixie dust precludes the obligatory swallowing of hopenchange.

Personally, I love hearing harp music, even if it does set off a twinge of hiraeth…

“I’m voting for kids” is kind of an oxymoron if she’s supporting Obama, because isn’t Obama all for State Sponsored Contraception, and when you practice unlimited contraception you produce far less kids?
And what happens when you produce less kids? You import strangers to do the menial jobs, strangers unfamiliar with your laws and customs and care even less about them. Europe has been in the forefront with that. Wasn’t there a recent blogger known for his constant reference to London as Londonistan? Hasn’t London already established Sharia Law zones inside its perimeter where Sharia Law prevails, instead of English Law?
Et tu France? Didn’t Mr Hollande promise France’s 500,000 person Turkish immigrants he would make France Turkey’s first European Colony if they voted for him? The French haven’t stopped fornicating, they just have no consequences when they do and they’re probably fornicating more than ever as a result. In the meantime Caucasian, predominantly Roman Catholic Christian France is becoming Islamicized.
And what of America should Mr Obama’s ACA become the law of the land? America’s already low birth rate will shrink to even lower levels and who will repave the streets, mow the lawns, care for our elderly parents while we run off to the beaches and national parks during summer vacation? Like the French and the Brits, imports who know little of our laws, customs, and traditions and who care even less. Is this Mr Obama’s ulterior motive, eventually supplanting the orginal population derived from the English and Northern European colonists with a Third World Population that knows neither English Law or the Judaeo Chrsitian tradition, the quintessential completion of his “Fundamental Transformation Of America”?

Another little vignette of how savagely Pres. Choom-a-rang treats children comes from his dealings with the DC school choice program.

A program that was empirically measured as a success, and which virtually everyone like…except the teacher’s union monopolists.

Why does the Collective love monopoly so much?

The only thing you left out was Obama’s support for all abortions, any time, even after the baby is born.

The personification of the phrase “stuck on stupid”.

Bumper stickers are so lame. They have a tendency to assert facts contrary to the evidence.

Think of the children! Until they harsh your mellow.

This is insanity extraordinaire and a principal contributor to progressive corruption.

Not just any “stem cells”, but, predictably, adult stem cells.

There are very good reasons why embryonic and fetal stem cells are undesirable and growing evidence that they are unnecessary for a medical revolution.

Bumper damage looks like they jack knifed the trailer.

Oops!…I Did It Again.