Don’t these people have any shame?

Don’t these people have any shame?

Who puts a bumper sticker like that one on a vehicle?  Have they no shame?

I love your bumper sticker photos and am always on the lookout for ones worthy of your blog. Practically walked into the back of this truck, parked near a craft store in Bellevue, Washington.

Decided to take two photos with my phone (darn, I wished I had my better camera!) so that everyone can read this potpourri of liberal lunacy. 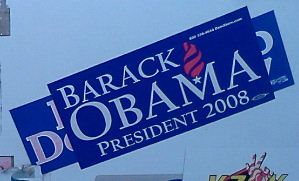 I don’t find any of the others quite so offensive: 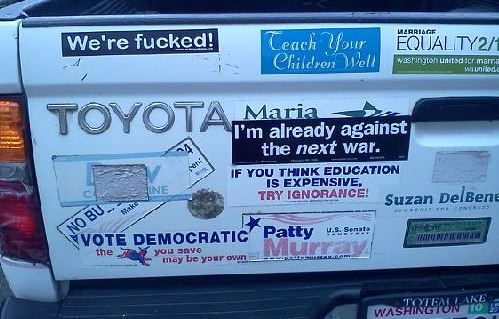 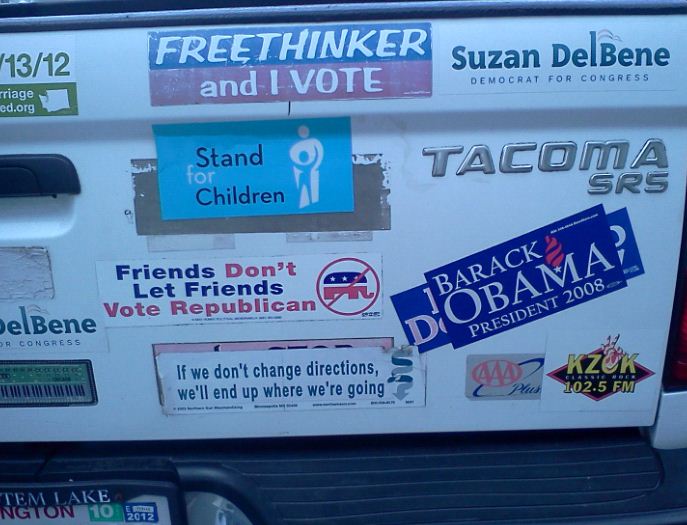 Too bad the Barack Obama bumper sticker wasn’t placed under the “We’re f*cked” one……..

Cute. Nothing says “Free Thinker” like a vehicle plastered with stickers saying in essence: “don’t you dare think differently.”

I was going to say the exact same thing! The ‘free thinker’ bumper sticker is an oxymoron by itself, but the collection of other bumper stickers drive in the point that this person has no original ideas and relies on other liberals to tell them how to think. I have a feeling if you tried to sit down and have a conversation about current events with them, it would read something like the back of their car.

No shame. No class.

The “Patty Murray” sticker told me everything I needed to know.

Washington is where the draft dodgers ended up when they ran out of gas on the way to Canada.

Good point… Or those who deserted.

This is a woman’s vehicle. Feminist, public school teacher or education activist, and/or social worker.

This is a woman’s vehicle.

1. It’s mostly a male audience.
2. The females who listen tend to be conservative.

I’ll bite. Whose stickers is The One’s covering. It’s not Kucinich…

(I realize that “old Fords are held together with duct tape and bailing wire,” but this is a late model Toyota and the duct tape is clearly not holding anything, just hiding something.)

I don’t get it. What’s offensive about the Barack Obama sticker?

Mindless, irony-free “FreeThinker” … you inspire me to push my kids that much harder in developing their intellectual abilities … so they never experience your boot (or your childrens’ muddy boots) stamping on their faces in the future.

LukeHandCool (who muses that it must be easy to be a free thinker when you are completely mindless).

I beg to point out yet again that you almost never see a conservative’s car similarly plastered. It’s rare to come across one. These are common on progressives’ vehicles.

Now, one or even two stickers you may put on to promote a candidate or something or those “My Child is an Honor Student at Ezra Taft Benson High School” or something. I had a “Save Tiger Stadium” sticker on mine (I had it on fourteen years after the vote to build an unnecessary new one, ten years after they vacated it, and four years after they tore it down, but that’s another story).

But what is the purpose of a dozen or so such stickers? It can’t be to promote something; at least while the vehicle is in traffic it’s difficult to read them all and in fact other drivers shouldn’t be trying to when they should be paying attention to the road.

The only reason I can think of–anyone has a different idea, please offer it–is to show that the driver is a good hearted person, moral, righteous, and superior to most everyone else.

And the reason you see these on progressive rather than conservative vehicles is that for many (by no means all) liberals, the politics are taken on as a means of self-display and self-congratulations, showing what a truly good person the driver is.

This is why a lot of progressives are impervious to empirical information–one of my Facebook Friends, very nice lady, for example, keeps posting about how the economy is recovering and Obama is sure to be re-elected on it. The politics are adopted for inner reasons. Further, progressives tend to define themselves by their politics.

And of course if you are for “social justice” or “peace” then those who disagree are by definition against social justice (whatever the hell that is) or for war. There’s also a thrill in being a leftist. No one is likely to go to the barricades clutching a copy of “The Spirit of Democratic Capitalism.”

There was nothing quite like getting stuck with an obstructed view seat at Tiger Stadium. “Excuse me, that giant blue beam was in my way. What just happened?”

Why do you think Comerica Park (ugh, hate that name) was unnecessary?

I read about a study once that said something to the effect that the more bumper stickers a car has, the more likely it is that the driver of that vehicle was prone to road rage. Wonder how true that is in this case.

“Welcome to the wonderful world known as U.S.C.S.”, aka United Socialist City of Seattle! Live 30 miles east and avoid the place at all costs.

“We’re f*cked” adjacent to “Teach your children well”? On the ass end of a vehicle where kids will read it? Truck Owner can’t be oblivious to that juxtsposition. Does Truck Owner think that’s funny, or that it demonstrates TO’s ironical intellectualism? “We”, TO?