The group was formed in early January 2012 specifically to fight Indiana’s right to work law which was signed into law in February.

The Lunch Pail Republicans are funded by a union PAC, as detailed in this entry at RedState:

Politico mentions a new poll showing Lugar leading by 2 points over Mourdock that was done by Magellan. A group called Indiana Lunch Pail Republicans paid for the polling… a group I’ve never heard of and I’m from Indiana.

i did some digging and from their April FEC report, it shows $100,000 transferred to the group from 1 PAC called “ENGINEERS POLITICAL EDUCATION COMMITTEE” which is a union PAC that has given to a littany of Democrats with a rate [sic] repub.

So a union is hiding under a shell so called Lunch Pail Republican PAC to hide the fact they are helping Lugar. Gotta help Obama’s favorite Republican I guess.

Here’s the entry for the $100,000 donation, which is the only donation the Lunch Pail Republicans have received: 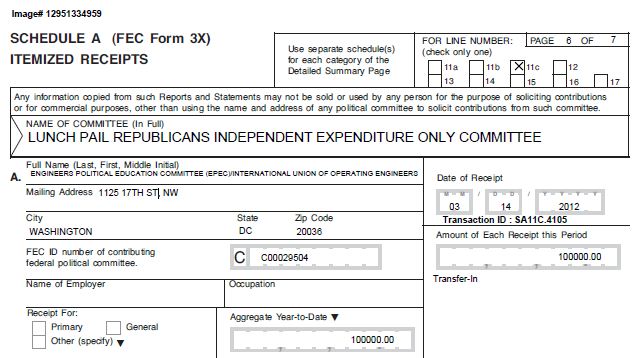 Here’s information about the Engineers Political Education Committee, which was the only donor to the Lunch Pail Republicans on record so far.

The Lunch Pail Republicans’ FEC filing page is here.  It appears to be run by James Stange of Oak Brook, Illinois, a former Republican state representative.  All of the money it raised in the 1st Q was spent supporting Adam Kinzinger in an Illinois congressional race, for television advertising.

There have been no filings as of today regarding fundraising and expenditures for the 2nd Quarter, although there must be funds raised since the Lunch Pail Republicans hired a pollster.

That a union-backed, anti-right to work “Republican” PAC is supporting and endorsing Lugar is everything you need to  know about why Richard Mourdock should replace Dick Lugar.

That and Dick Lugar’s Iran Problem.

Lugar is crapping in his own lunch pail.

And he’s making the argument for term limits better than most anyone could.