I’m a regular reader of your blog, and love the bumper sticker page. Here is my contribution. Yesterday was the gay pride march in Northampton, MA which made for great opportunities for bumper sticker photos. Sure enough, here is the obligatory “car covered in stickers”. 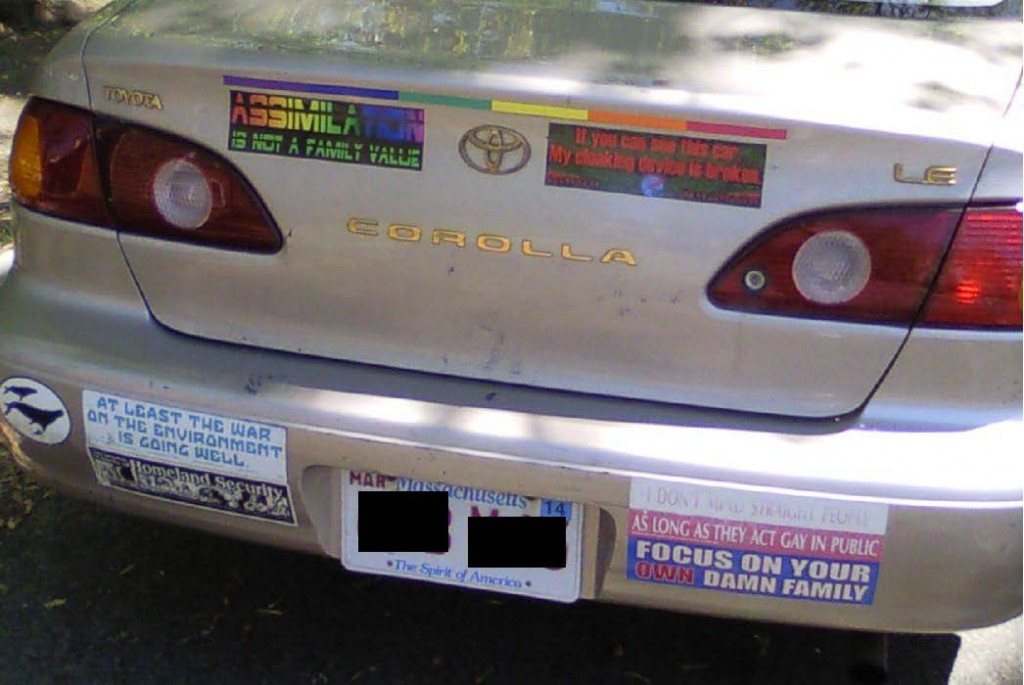 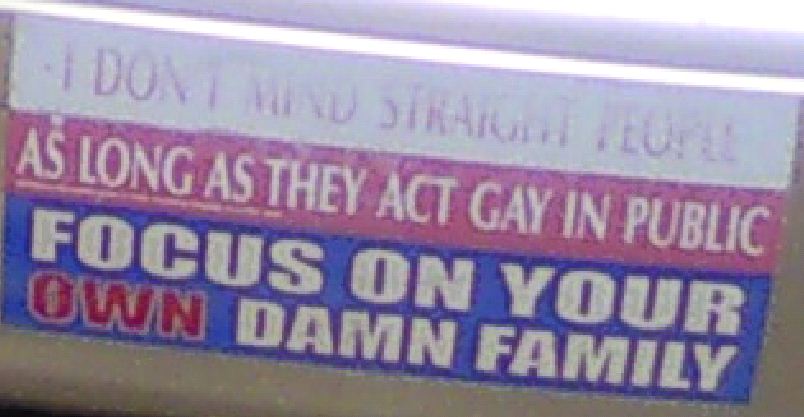 You didn’t pay attention to the Stonewall Agenda did you? If you had, you would never have been for homosexual marriage. After Stonewall, they implemented the elephant trunk in the tent strategy. All they wanted was tolerance. Today, the entire elephant is in the tent and the inhabitants have been thrust out. Now our kids are subjected to homosexual propaganda at every turn. It was never about tolerance. It was always about striking back at Rome, at heterosexuals, and at traditional morés.

Unless the issue is going to affect me personally or requires making a police report, I am not interested in other people’s sexual activities or preferences, and would prefer they stop shoving this information at me.

Oh, the tolerance of them all!

“For immediate release…Susan Vass, Former Person of Pallor, having remembered that her sister has naturally curly hair and that she and her brother both have an excellent sense of rhythm, is pleased to announce her application to become the second Womyn of Color at Harvard Law.”

My views on gays has devolved considerably over the years.

That not one, not two but three of my gay acquaintances took a sudden interest in counseling teenagers of the same sex had a lot to do with that devolution. All three had hit an age when they weren’t as attractive on the dating scene as they once had been. Each was having trouble replacing their last partner. Now maybe they were sincere about wanting to help emotionally troubled teenagers but the idea made me queasy.

Then there was the harassment. The only businesses in most city’s boys towns that rely only on gay customers are the bars and the stores that specialized in size 12EEE high heeled pumps. The restaurants, boutiques, galleries and antique stores all need straight customers to make a go of it. It would be nice then not to get harassed by the bar patrons on the way to and from the restaurants. Had my entirely platonic male friend ever taken issue with the vile names directed at us and beat the daylights out of these morons HE was the one who would have been accused of a hate crime.

I have seen gay pride marches before. A group of almost exclusively white, aging hippies wearing rainbows, carrying signs that say the same thing, chanting the same slogans over and over again, and demanding that everyone else believe what they believe.

Yep – nothing says diversity like a gay pride parade.

Sounds like you saw them on tv. The one I saw live had a guy in a pink tutu, wand in his hand, doing jétés, lots of folks making out on the street. A few others in NYC plus Zombie’s pix of the ones he went to, they had very little to do with pride and a lot to do hatred and harassment for the Church of Rome, scorn and contempt for Christianity, contempt for heterosexuals and traditional values. You can’t call a couple of guys blowing each other in the street traditional, especially when some people are silly and misguided enough to take their kids along.

With all of that, I’m live and let live when it comes to homosexuals. We all have our sin problems.

The two marches that I saw were in person. The participants looked like they were a cross between refugees from the original Summer of Love and the Soviet Central Committee. You have to wonder about a movement that seems to be hopelessly stuck more that half a century in the past.

If anyone had tried to make out I am certain they would have ended up in the local emergency room with sprains and fractures, but I saw nothing like that. Maybe their idea of kinky fun was to wash out each other’s bedpans.

Cars covered in stickers, especially with purely progressive memes, is very common in Northampton. If you really want to see an outbreak, travel a little further north to Greenfield, and even more so by traveling just a few miles more to Brattleboro, VT. In the 2008 election, voters in Northampton and some of the surrounding towns like Amherst chose Obama in numbers as high as 85% of the total vote. The area’s culture is a combination of the Five Colleges (i.e. very progressive academy folks) and natives with a long history of classical liberalism (some good, some not so good). The region overall is typical of post-industrial-but-never-recovered New England where there is much dependence on local, state, and federal subsidy.

In other words those who are not progressive but frequently in the area don’t really even notice bumper stickers any more. It seems more like art than anything meaningful.