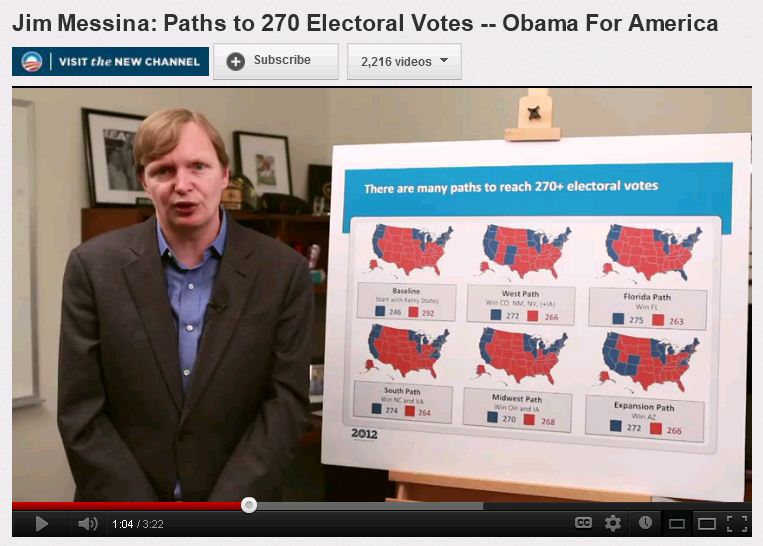 Yet a poll just released in the Detroit News shows Obama up by only 5 points over Romney, via The Hill:

President Obama is leading Mitt Romney by 5 percentage-points in Michigan, according to a new poll of likely voters in the state.

The survey, conducted by the Glengariff Group and reported in the Detroit News, shows an even wider margin for Obama among female voters. He leads the former Massachusetts governor by 12 points — 47 percent to Romney’s 35 percent.

Among all voters surveyed, Obama led Romney 45 percent to 39.5 percent in Michigan.

This polling will come as no surprise to AxelPlouffe, whose entire “War on Women” line of attack recognizes that without a large gender gap, Obama is toast.  As explained in the Detroit News:

“Barack Obama, if he wins, will win it on the women’s vote, “[pollster Richard] Czuba said. “I  think, for the Romney campaign, that is the issue now, making headway with the  gender gap.”

Regardless of female support, Obama’s overall support in Michigan is well  below 50 percent. As an incumbent, Czuba said, that indicates the  Democrat-leaning state may be in play come November; Obama won the state handily  in 2008.

Do not expect the War on Women nonsense to abate.  Obama needs it too much to let go.

I have been keeping my eye out for a new Michigan poll. Thanks for posting this.

On the same note, I signed up with the Michigan Republican Party for the first time in my life yesterday. I’ve never done anything more than vote and maybe put a sign in my yard but that changes this year. Gonna do what I can to defeat Obama and, hopefully, Debbie Stabenow.

During the 80s recession, the only part of the state that managed to survive was the southwestern LP because it was economically diverse and not hamstrung by unions. Detroit learned absolutely nothing from that recession.

Nothing but total victory is acceptable. We’re going to play fair and play by the rules … we’re not going to shoot medics or torture prisoners … but we will decimate our opponents on the battlefield.

With Michigan a race, the blue devils will be forced to divert precious resources there, and we’ll attack them with all we’ve got in the swing states. Pound them mercilessly.

LukeHandCool (who, after a few drinks with dinner, feels a little feisty and warlike … but only for a good and righteous cause).

Great! Lets hope Team ‘Bamster pumps a lot of time and money into Michigan, and lets make it a landslide!

There is the potential to make several regular blue states competitive this year, primarily due to Obama’s poor performance. +5 in MI should worry him, especially since there as in so many states he never seems to top the 50% threshold, dangerous for any incumbent.

The last Oregon poll was also +5, and PA is only +7 RCP average even though the polling there is all registered voters, which leans Democratic.

Who can forget the $1.75 Saginaw house sold on Ebay in October 2008? And the prophetic lnes-

It took me 4 days to hitch from Saginaw
-Ive gone to look for America….

All gone to look for America.

I have been following the local real estate market for several years and while there are no $1.75 houses in my town you can definitely get a decent house on a couple acres that only needs cosmetic remodeling for well under 75k. I follow a handful of houses at a time and watch the prices fall and fall until someone finally picks them up for 30k or 40k. I just watched a house I used to live in sell for 30k when the last sale price was 120k before it was repossessed.

And my area hasn’t been hit as hard as many others. The state government and Michigan State University keep most of my neighbors above water either directly or indirectly (at the cost of the rest of the state of course).

Liberals have tried in Michigan to get many ballot measures and/or initiatives on the 2012 Ballot.
From an constitutional amendment to enshrine collective bargaining in the Michigan Constitution, a voter referendum on Michigan’s Emergency Financial Manager (EFM) Law to legalization of marijuana…

So far all these attempts to get them on the ballot and drive certain special interest voting blocks to the polls have failed.

The war on women meme is a similar notion that unions push, that people are stupid and vote against their best interest… some folks believe that if they vote for liberals they’ll get a seat at the table, or their rights and/or livelihood are secured by gov’t and/or stem from liberal culture of corruption.

Ninety-five percent of the local media are in the bag for Obama and dems, daily news coverage is akin to the state media out of Canuckistan.

Why, deep down, do I get the feeling that this “War on Women” only exists in the Dems’ mind (they march in lockstep and share Axelrod’s brain)?

They deny coining the phrase, yet they repeat it at every opportunity.

Just like there were Potemkin villages and missles, I’m wondering if this is a Potemkin issue.

“Barack Obama, if he wins, will win it on the women’s vote,” Czuba said. “I think, for the Romney campaign, that is the issue now, making headway with the gender gap.”

He said women were offended when Romney did not repudiate radio talk host Rush Limbaugh after he called a woman a “slut” for testifying before Congress about the need for contraception coverage in health plans.

When those listed below, have uttered things far worse according to:

Is there some secret CIA thingy, that I missed?

Visit here. It will help to get you more motivated to defeat Obama.

Romney needs to keep hammering the economy and, from time to time, put it in perspective for women – not that I believe the issue is any different for women than it is for men.

That said, I don’t think Romney has a snowball’s chance in Hell of taking Michigan. The unions run the state, and there’s a heavy militant black population in Michigan. Detroit, Flint and Ann Arbor make it a bridge too far. There has not been enough time for Snyder to impact the financial condition of the state before the election to show the dimwits in that state the error of the leftist ways they’ve embraced lo these many years. Stabenow, now that’s a different story. Definitely vulnerable.

And who took the Reagan Democrats in Michigan and gave Romney a run for his money in Michigan? Santorum. The idea that the war on women is a plus for Democrats is bull. Just like throughout the rest of the Midwest, a good number of Michiganders liked Santo. The Michigan primary was open, and a statistical tie between Santorum and Romney. With lots of bad feelings because the RNC committeman cheated after the fact, and his reelection will be a bruising part of this coming weekend’s convention in Detroit.

If they say Michigan’s in play, the only way to clinch it for Romney is if he picks a known social conservative as VP. My suggestions are either Santorum or Palin.

Don’t believe me? Recall 2009 when Palin came to Grand Rapids and was treated like a rockstar, McCain never even campaigned in Michigan.

Reagan Democrats are needed to push Romney over the finish line, and Santorum and Palin deliver them, it’s as simple as that. Ignore what the Hill and the Detroit News says, they are irrelevant.