A bittersweet update to my prior post about Etan Patz.

Who knows if this is the real killer.  I guess we’ll find out as more evidence comes out.

Hopefully the family will have the closure not only of a conviction, but of being able to bury Etan properly.

The Criminal Complaint was short and to the point: 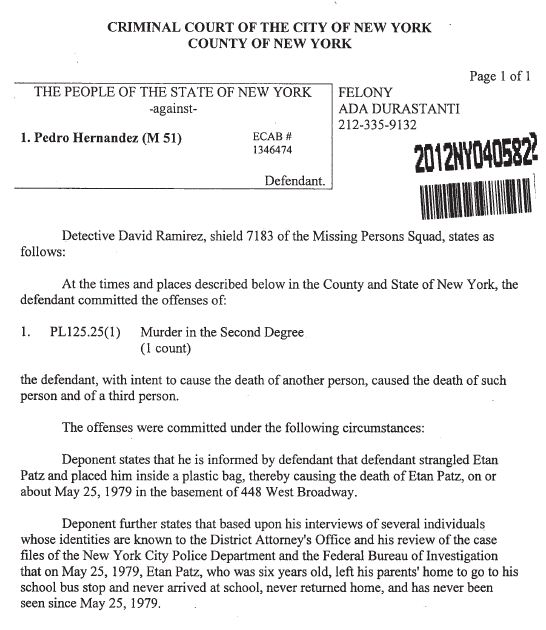 They “never moved, and never changed their phone number, hoping Etan would one day come back…”

It really does demonstrate that a mentally healthy parent’s grief in losing a child is life sentence. It’s a pefect quote to use at Hernandez’s sentencing.

Hopefully the family will have the closure not only of a conviction, but of being able to bury Etan properly.

Did they ever find a body? I didn’t read the brief yet, but it sounds like they haven’t….

I hope the family will now have some peace. How tragic. And to think, Ronald Reagan declared this day “National Missing Children’s Day” – today – for little Etan.

No body, I’m afraid. He was never found and will never be as a result of the arrest.

I hope this provides some solace for the family. My heart goes out to them. I am so sorry.

If that kid had been alive, he would have been my age.

We will never know about any of the Life of Etan, because of some perverted animal who took it all away from him.

I was driving yesterday & heard this on our national radio. On hearing the name I immediately thought Peurto Rican.

Sure enough I look it up today & there it is.

It wasn’t the name so much as the radio report stated that he had confessed to family & friends that he had killed a boy in NY..

I don’t even know where Reurto Rico is – either I am a bigot or master profiler .

And I can sense you’re not a bigot. You just made an observation, which then you researched and thus confirmed.

One thing I learned is that apellidos (surnames) can be quite interchangeable across nationalities. He could have been from any other Latin American (or even Spaniard) nationality. It just turns out that he was, indeed and very unfortunately, one of my own.

Did you ever hear about that strange Jesse Jackson quote on how he was hoping and praying that the fellow African-American on the elevator or somewhere else wouldn’t attack him, or something similar to that? Well, that is a lot more common than you think among too many people. Even among law-abiding Puerto Ricans like myself.

Yes that name could have been any spanish speaking community but I guessed right because of his stating he had confided in friends & family.

That was the key.

“I don’t even know where Reurto Rico is”

Well, let me help you. Here.

I find it difficult to believe that some of these confidants or Hernandez himself did not allude to this at confession.

Two things from my limited knowledge of the case. If his confession is to be taken as fact, he put the body in a trash dumpster, and since it was never reported as being found then, in all odds the body will never be found have been taken to the dump years ago.

Doesn’t it take *two* pieces of evidence to convict for murder in this state? Without a body, and any evidence of the crime other than the confession, even if he had told others about the crime that still counts as only one “bit”. If true, it is possible he will not be convicted even if he stands by his confession. Right?

Very sad. My heart goes out to the parents.

Put me down as “unconvinced”.

The guy has a long history of nut-bagery, and long-ago crimes are often confessed to by people with very strange…even kindly in a twisted way…motives.

That is true about people confessing. However Prof did give notice a few months ago something was happening.

Hopefully they would have used this time to get it right & get through all the PC ethnic stuff.

What more evidence is there likely to be after all these years? Unless the guy kept some type of souvenir from the killing, it seems unlikely that there would be any way to corroborate his confession.

But I hope you’re right and there is something else. This family has lived with the nightmare of not knowing for far too long. And if this guy who has confessed actually does turn out to be the killer, at least he says he did not sexually molest the child (and as far as I know, there is no evidence that he is a pedophile). Perhaps Etan’s family can find some comfort in that. They have been convinced for years that another man, a convicted pedophile, took Etan, and the thoughts of what Etan may have suffered at this pedophile’s hands must have tortured them.

In any event, I wish the Patz family peace. No family should ever have to suffer what they have endured all these years.

A good attorney will be able to argue against the confession, absent corroborating evidence – which, as several have noted, will be hard to come by at this late date, given there was NONE EVER found by investigators.

The leaked substance of the confession (which may or may not be accurate) is that the guy worked at a neighborhood bodega and knew Etan from the street, enticed him with a free soda, took him to the basement [I presume (not in leak) with intent to molest, chickened out, and panicked], strangled him, and put his body in a garbage bag and put it out with the trash (part of the guy’s job).

Maybe not enough for a conviction, but what are the odds a guy from the neighborhood who left shortly after the disappearance just happens to have the sort of mental breakdown which causes him to confess falsely?

This is a sickening tragedy and should be a reminder to all parents that 6 years old walking to school alone is putting your child in grave danger. I don’t know how far away the bus stop was but what a tragic mistake. I have a neighbor I have known since 4 yrs. old. Even though she is not my child, I guarded her w my life. If we even went to the park, I would walk on the side of the sidewalk closest to the street. If someone tried to grab her, they would have to get to me first. I won’t even leave my dogs outside in the yard unattended for more than a few minutes.

On the contrary, the paranoia sparked by this case has deprived two generations of children of the freedom that used to be our heritage, as overprotective parents don’t let children walk to school any more, or go out all day on their bikes, etc. The world is no more dangerous now than it was 40 years ago, and this one incident does not justify the response.

The complaint mentions “a third person.”. What does that mean?

Believe that is a typo, and should read OR…not AND