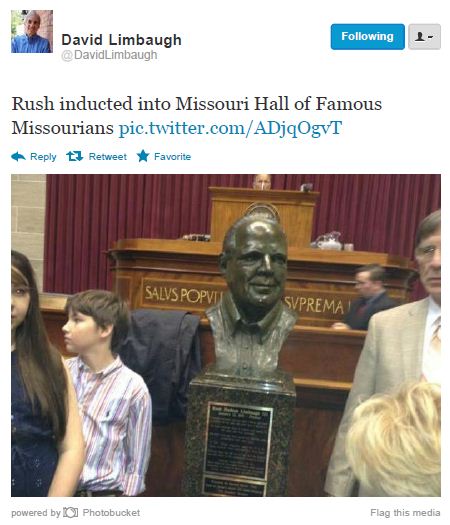 The hating haters really have trouble with effective push-back, don’t they?

I hope they have a security camera focused on the bust. Because I suspect that some broad-minded liberals are going to try to bust it.

Please, for goodness sakes, don’t you understand that the “Occupy” crowd is entitled and thus can do what they wish! Jeez, how many times does this point have to be beaten into Conservatives before they’ll realize that the Occupiers are very much entitled.

Oh, one last point, the mean nasty state will have to clean up after the Occupiers are through because it wouldn’t be fair for them to do it.

It’s only a bust. It can be replaced.

But that honor bestowed will NEVER, EVER be taken away from Rush, no matter what they try to do to him.

WAHHH!! WAHH!!! Somebody come change my di-di and gimme a pacifier quick!!!

I sent an email a few weeks ago to the Missouri state legislator who represents my district, and another email to the Missouri House Speaker, urging them not to give in to the juvenile, nasty Rush haters who were trying to deny Rush this honor.

Neither responded to my email. But that’s ok. At least they didn’t give in. Too often the risk averse politicians and businessmen cave under pressure from the activist extremists who flood them with idiocy on twitter. This is a hopeful sign.

Silly people. It isn’t art unless someone urinates on it.

Congratulations, Rush Limbaugh. You are still the leading voice of the conservative movement, and maybe one day conservatives will actually take your advice.

JEFFERSON CITY, Mo. (AP) — Conservative commentator Rush Limbaugh was inducted into the Hall of Famous Missourians on Monday during a secretive ceremony in the state Capitol as police stood guard to keep out any uninvited political opponents of the sometimes divisive radio show host.
Limbaugh, a native of Cape Girardeau in southeast Missouri, addressed a crowd of more than 100 Republicans during a closed-door event in the Missouri House chamber. Speaking from the chamber’s dais, he thanked his family for their support throughout his career, denounced liberals and Democrats as “deranged,” then helped lift a black curtain off a bronze bust of himself, which he hugged — head to head — for photographs.

The timing of the ceremony was kept secret until shortly before it occurred, and then only Republican lawmakers, other invited guests and the media were allowed into the chamber to watch — an attempt to avoid any public disruption after Limbaugh’s selection was criticized by Democrats, some women’s groups and other political foes.

Limbaugh, 61, arranged for a guest host to handle his radio show Monday so he could be at the Missouri Capitol. He repeatedly declared how humbled he was by the honor.

It is sad that a great american patriot haad to be honored by his state inn secret because the infantile leftists might throw a temper tantrum. It makes me wonder what is going to napped when the election results are in and Obama loses. Oh, way to go Rushbo.

Congratulations to Rush on a well-earned award. As to the haters, I guess that’s all they’ve got left. Their entire religion – socialism – is once again being provent to be a lie.

Rush, You are truly great and it is well that your birth-state has given you the recognition and honor you earned. You are the “First-born” of the radio talk show hosts because you were the first to be so successful that you firmly established the genre on the radio and spawned dozens if not hundreds of imitators. You are also the “first-born” of the talk show hosts in the Biblical sense because you are still pre-eminent after decades with no close contenders.
Bravo Rush!