A headline so obsequious even NY Times had to change it

A headline so obsequious even NY Times had to change it

Remember that Indelible Image of a Boy’s Pat on Obama’s Head?

You know, the one that was so indelible that no one remembered it, and the NY Times felt compelled to remind you how indelible it was with a headline “Indelible Image of Boy’s Pat on Obama’s Head.”

Memeorandum capatured the headline, as did Google Cache: 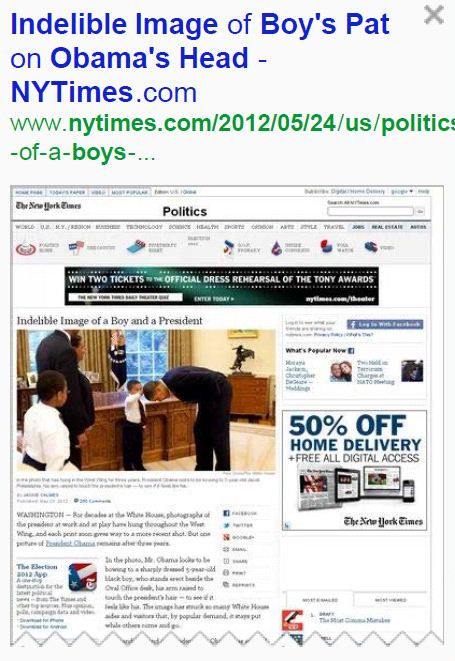 It was an effort worthy of September 2008, with a focus on race and the historic racial implications of Obama’s race and the role race will play in an election and what race means in the race.  And it all was indelible!

As a candidate and as president, Mr. Obama has avoided discussing race except in rare instances when he seemed to have little choice — responding to the racially incendiary words of his former pastor, for example, or to the fatal shooting of an unarmed black teenager in Florida. Some black leaders criticize Mr. Obama for not directly addressing young blacks or proposing policies specifically for them.

Yet the photo is tangible evidence of what polls also show: Mr. Obama remains a potent symbol for blacks, with a deep reservoir of support. As skittish as White House aides often are in discussing race, they also clearly revel in the power of their boss’s example.

… in a touching effort at boosting the Obama reelection campaign.

Kudos, NYT! You’ve made it all very clear.

In fact, it was an effort so transparently obsequious that even the NY Times could not stomach the headline, changing it to “When a Boy Found a Familiar Feel in a Pat of the Head of State.” 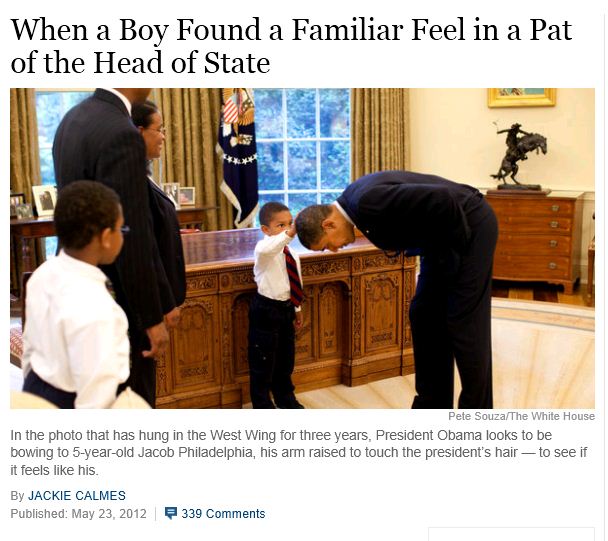 If you had any doubt that the general election had started, these indelible images should disabuse you of that notion.

Pres. Dog Breath mistook the child for a Saudi prince.

There are so many…

I got up late but when I saw this I was thinking something of the sort. After awl… The anointed one has a habit of bowing to every superior..

It’s three years later, where are the breathless followup stories about how the child’s life was changed for the better, how this magic moment will be remembered forever, and how he is looking forward to becoming old enough to vote so he can help re-elect Obama to his 4th term (and 5th, and 6th…)

” Mr. Obama has avoided discussing race except in rare instances when he seemed to have little choice ”
thats a VERY big assumption.

His surrogates do most of the dirty work.

This isn’t snark. I cannot think of a time when Obama DID NOT inject race into a matter (which was prone to that), or a time when he did anything to heal any racial issue.

I admit to being perhaps less than fully objective.

Yes, poor Obama. He didn’t want to say that if he had a son, he’d look like Trayvon. He was forced to say it. What Obama really wanted to say was that it is always a tragedy when a young person loses his life, but it’s important for everyone to wait for the investigation to be concluded and the facts to be known before jumping to any conclusions about who was at fault or if race was a factor.

That’s what Obama would have said, if that reporter had not wrestled him to the ground and pulled those words about Trayvon looking like his son out of Obama’s mouth.

I thought it was jost Obama on another bowing tour, this time bowing to the generation he’s looting money from.

Suddenly I don’t care about the national debt or unemployment anymore. I just feel warm and fuzzy.

You walked THIIISSSS close to the line there….

I think the subliminal message is:

A President Romney wouldn’t let anyone touch the perfect hair.

I’m sorry, but Romney’s hair looks like its bulletproof.

I think the second headline is far worse than the first. The “familiar feel” aspect reminds me of when I taught at an all-black school on Chicago’s south side. One day I felt a strange sensation, only to turn and find one of my eighth-grade students touching my hair. So I let her and a whole bunch of other kids touch my hair. It was sad—the kids were so isolated they had never seen a white person’s hair up close. Then again, some of these kids possibly had not previously seen a white person up close before either. (I was one of two white teachers in the school, which closed a year later.)

(Be kind in your responses. It’s quite a “touching” photo. Don’t you agree?)

Yes, young man, Obama’s hair feels just like yours. And that is what is most important — not the five trillion dollars in new debt that Obama has piled on your young head.

So when your mommy and daddy (or your mommy and mommy, daddy and daddy, whatever) go to the polls in November, remind them of the importance of voting for the candidate who looks most like themselves. Pay no attention to competence or qualifications or record of performance in office. No, it’s racial solidarity that matters most! (Thanks, NY Times, for reminding us all of that, yet again).

It’s a very cute photo, for sure.

The impact on me is this:

1) I recognize the photographer was either skilled or lucky to photograph a very unique image. Duly noted.

2) My contempt for the NYT increases as they manufactured a phony “news” story so they could run a 3 year old photo in an attempt to favorably manipulate its readers feelings about Obama. Duly noted.

3) The NYT’s manipulative attempt failed. My feelings for Obama have not changed. Duly noted.

It’s going to be a long five months.

The subsequent months following the election, no matter which way it goes, “ain’t gonna be no picnic” either.

Yuppers, I’m sure that’s EXACTLY what MLK, Jr., had in mind as the exalted ideal of a color-blind (as opposed to the Libs’ color-BIND) society.

At least it didn’t venture in the “napppy-head” arena…

Or, considering the debt this wee lad will potentially inherit, perhaps an apt caption might be:

Hair of the Dog That Bit Him

The only thing touching about this photo is the fact that the kid is touching Obama’s head.
But go ahead, NYT, keep bringing up “race” stories.
That race card has just not been played enough!

A statement so ominous that even my dog ran and hid when I read it out loud:

“We may not even finish it in five years,” Obama told roughly 70 supporters at the $35,800 per head dinner. “But I certainly need five more years to get us locked in on where we need to go.”

Look. When I go to use my Yahoo email account, this was the top news story.

Maybe we’ve been too harsh. The last three years haven’t been that bad, have they?

Afrocentric head pat in front of the Rootherford B. Hayes resolute desk looking down.. uhm up, err back ah vorwarts!

Anyone who thinks that photo wasn’t posed, should see me immediately about investment opportunities in Brooklyn, NY.

Meet me at the base of the big bridge they’re selling at auction. Let’s talk, call 1-800-For-Sale. (Serious buyers only please).