A bumper sticker from California

A bumper sticker from California

Any excuse for the link.

I’m getting an increasing number of bumper stickers from suprised Californians. From reader Georgette, who writes: 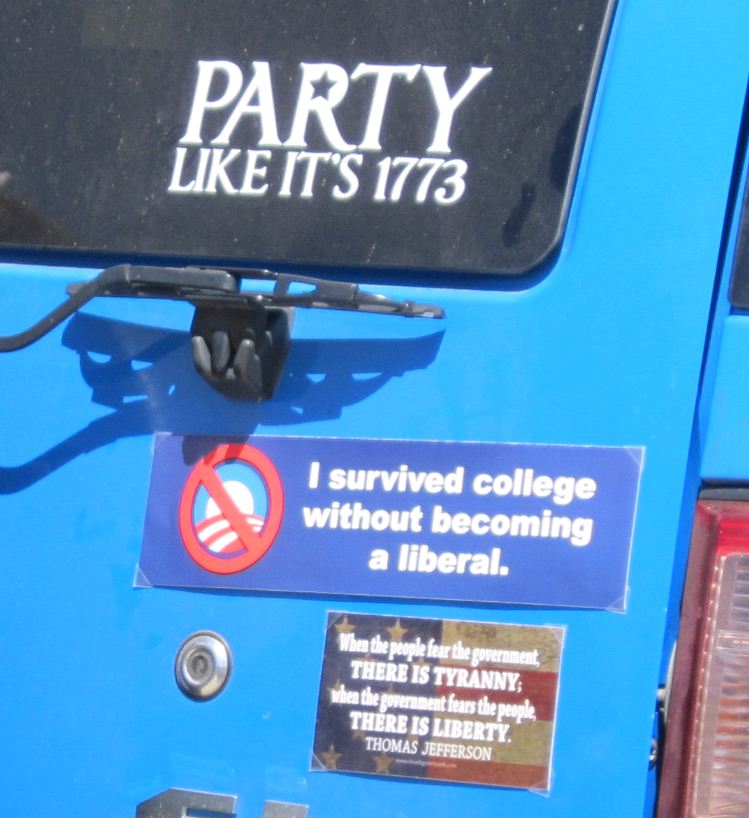 I too survived college without being a liberal. If anything, I became even more conservative.

Then again, my college hosted the Mercatus Institute and a bunch of my professors are merely moonlighting teaching as they work in the State department and have a more realist world view.

I love that the bumper stickers are “mounted” on the vehicle with little picture corners!! I’m surprised no fellow Californian has “lifted” them. 😉

The bottom one is, to me, the classic:

That’s why the TEA Party must be marginalized, by any means necessary. That keeps the people on the bottom, under the federal government’s thumb – in fear of the government.

There are good Conservatives in Kuhlifornia still.

Not enough to get anyone elected to a state-wide office. And not enough to turn the red ink tide.

Actually, if you get outside the SF area, most of LA County and some of San Diego and Sacramento, most of the state is populated by pretty reasonable people.

Problem is, those areas would vote for Charles Manson if he ran as a Democrat. In fact, they did vote for Moonbeam.

I can’t see that California from my house.

You will still find 100 coexist stickers for the ones pictured here. I live in a traditionally Red area, but it is becoming purple.

OT: I HATE Google ads with a passion. Today I get to see all the shoes I didn’t buy and am second guessing the color of the pair I did buy. ARRGH!

I found college to be quite enlightening. It was when I learned that my ideological model was classically liberal. That my conception of liberalism and, in fact, the definition of liberalism, was often incompatible with the prevailing interpretation in America and Western societies in general. It’s when I first recognized the role semantic games played in distracting people from discussing issues on their merit. Well, that, and the selective nature of our perceptions, and our vulnerability to suffer distortions of reality through external influences. It was a sobering and valuable experience.

I live in CA. I takes real guts (or a body & paint shop on retainer) to put on a remotely conservative bumper sticker out here. That is why you don’t see them much.

All that liberal tolerance, you know.

I live in the People’s Republic of Santa Monica and only use magnetic bumper stickers now.

The day after I put a Dole sticker on my car in 1996, someone twisted my windshield wipers into pretzels.

Soon after I put a Bush/Cheney sticker on my car, it was egged and spray painted and they tried to rip the sticker off. And a nutcase with a Code Pink bumper sticker on her car tried to harrass me on the freeway.

I love the following column. One day standing in line at Whole Foods, looking at all the self-righteous “green” customers and “too cool” hipster employees, I got to daydreaming what it would be like to be wearing a conservative-themed t-shirt at that moment. I then thought of the same experiment this guy actually performed here in my neighborhood (I’m just a few blocks from the Brentwood Country Mart that he visits).

A liberal learns the hard way which side is more tolerant by wearing a liberal t-shirt in red areas and a conservative t-shirt in blue areas around the L.A. area. He’s a bit shocked by what he finds:

I was in Boston attending a wedding for a friend’s son. While walking through Fanueil Hall[2004] wearing my “W 2004” hat, some guy came up to me and said that he liked the hat and that I had brass balls. I told him that, while I did like “W”, I wore the hat to piss off my wife who thought that I was really looking for a fight. The only fight I had was with my wife.

That’s a Palinista. The 1773 is a Palinism that set up the LSM, and they fell for it.