This video (via Above The Law, h/t tip from Badger Pundit) was taken on the edge of the Harvard Law School campus.  The building in the opening shot is a new building where Wyeth Hall, the dorm I lived in first year, used to stand.

They had a hard time corralling the wild turkey which somehow made its way into Cambridge, and the most brilliant part is at 2:05 where a woman asks, “Is that a hawk?”

Face palm.  Don’t look at me.  We knew our Wild Turkeys when I was in law school.  That’s why I’m not on the Supreme Court, and Elena Kagan is.

Took this a couple weeks ago. The turkey was courting about eight hens in our driveway. I was amazed at how brilliant its colors were–though the picture doesn’t reflect that. It’s very difficult to photograph wild turkeys as they are very alert. Plus, we were using a cheap camera and were taking it through a not yet spring-cleaned window. 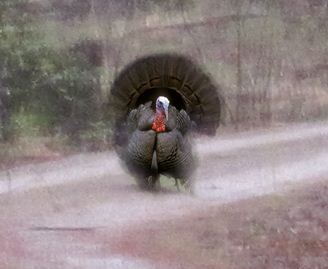 Professor, I do believe you’ve cast a spell over me, and I’m sure many others, ’cause every time I say to myself that I spend way too much time on your blog and try to go here http://www.1112.net/lastpage.html you hit me with another zinger of a headline and I can’t resist staying just a wee bit longer.

Wild Turkeys and craaazy obituaries….who could ask for more?

I love that link!

Okay, this one has my blood boiling:

It canNOT be legal for a foreign nation to have a “look” at our votes, and be able to manipulate the numbers (if they so choose) BEFORE we in this country have them counted and ensured as certified?!!?

What can be done about this?!?! I do not see ANY election being able to be counted and certified with integrity if a foreign nation has control over the data, the counting, and the outcome. Stalin (supposedly) said, “…..it is the one who COUNTS the votes that matters.”

The American advocacy group Project Vote has concluded that SCYTL’s internet voting system is vulnerable to attack from the outside AND the inside, a situation which could result in “…an election that does not accurately reflect the will of the voters…” Talk about having a flair for understatement!

And, just look at who says it is “vulnerable to attack” – good ol’ Project Vote………Obama’s old community organizer group! So you KNOW this has to be FUBAR in action for them to say so!!

Yes, this one is a real shocker. We just went to electronic voting (for no reason that made sense to many); now it’s time to find out if this bunch is involved. We, as a nation, stopped going to the polls because it became an inconvenience, now we can’t even count our own votes?

This one NEEDS to be stopped. HOW DO WE DO IT, PROFESSOR?

You folks are pretty late to the party.

Liberals have been talking about the dangers of voting machines, electronic voting, and unverifiable vote counts FOR YEARS.

The Democrats have guaranteed foreigners will illegally vote in our elections; why shouldn’t they help count their votes?

Disturbing beyond measure. Military votes too. Is there any reason that governmental agencies can’t be prohibited from contracting with foreign-controlled entities if U.S. citizen-controlled entities can supply comparable product or service? (I mean, inasmuch as they manage to keep similar records in order to privilege minority- and women-owned businesses…)

I’m so glad that Obama has ushered in a new era of worldwide respect for America. It looks like the editors of The Australian have been taking lessons in juxtaposition from Drudge.
http://twitpic.com/9aczp7

Are you making a Conga Line?

That is a superb photo/story mix. Why don’t you like it?

The Australian is Ruperts flagship newspaper . They know exactly what they are doing.

Back in our college days in the wilds of West Texas, we too knew how to distinguish our Wild Turkeys…. which is probably the reason there is only one law school in West Texas (and a very fine one it is).

Darned – over looked the Ann Romney line – I guess I’ll have to like her a little more since we had both our girls as undergrads and our boys while I was finishing my masters and working full time so the hubster could finish his internship.

Those wonderfully astute Harvard students (Snark, snark, snark!) were mighty luckly that was a turkey and not a wild goose! Geese are mean and will attack anything and anybody nearby.

I often bicycle along a river to work, when the snow stops falling, and I always see a gaggle of geese in the morning. I’ve always heard that they can attack, but it hasn’t happened to me, yet.

I think they sense that I really wouldn’t mind plucking them and stuffing them into my oven. I think it might have something to do with the look of hunger as I pedel past them.

We knew our Wild Turkeys when I was in law school. That’s why I’m not on the Supreme Court, and Elena Kagan is.

Point taken, Professor, and it would appear that Shakespeare commented about the present American condition some four hundred years ago:

The world is grown so bad that wrens make prey where eagles dare not perch. ~ Richard III, Act I, Scene 3.

“That’s why I’m not on the Supreme Court, and Elena Kagan is.”

Ouch. But, Harvard’s got a replacement for the one that moved to Washington. And 101’s pretty good stuff, too.

As part of my family’s farming operation when I was a kid, we raised turkeys commercially (up to 20,000 each cycle). Many domesticated breeds have white plumage, but there’s a domesticated breed called “bronze” that very much resembles a wild turkey. I’m almost certain that’s a bronze hen.

Maybe it’s an escapee from a veterinary school?

Perhaps the only Wild Turkey they are familiar with at Harvard comes in a bottle?

Professor … The video shows just how goofy some folks can be. Loved it.

The return of the wild turkey is a great wildlife management success story. While naturally wary they easily co-exist with man. A flock of them keeps my large veggie garden caterpillar and beetle free. The price is a few pecked at tomatoes plus some damage of tender vines from the turkey’s habit of scratching out wallows for dust baths.

Nearby Brookline, Ma was overrun by wild turkeys back in 2007:
http://www.boston.com/news/local/articles/2007/10/23/turkeys_take_to_cities_towns/?page=full

Hahahaha!! No, it’s a juvenile bald eagle … they graze and browse the first couple of years before they learn how to fly!

I can’t believe no liberals were hurt running into the street during this filming. I want to see the disclaimer!

Patricia, that is one stud of a turkey and a nice pic!

No, it’s the latest addition to the faculty….