What makes this presidential election different from all other elections?

What makes this presidential election different from all other elections?

In all other elections we just vote.

In this election we vote bitterly.

From reader Carroll, spotted in Tucson the other day: 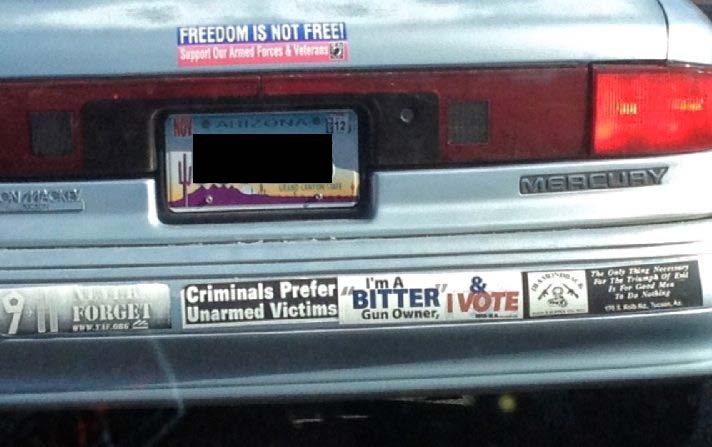 Now to rally these people to go out and vote!!

You can color me more as desperate as if O’bammy gets four more years, he will surely get to nominate one more Supreme Court justice which will tip the balance in favor of big government for decades to come.

Imagine the laws that they could pass no matter how intrusive and yet they would be found constitutional!

It is time to unite behind our party and get on with the task of occupant removal activities regarding Chicago mob in DC.

Vote to evict ’em all!

For myself, I will vote JOYOUSLY, with ELAN…!!!

(or Debbie, if Elan is unavailable…)

The thrust of Obama’s bitter clinger comments has a couple elements.

On the surface, it is just an insult, that we hicks are small minded and old fashioned. We just can’t grasp academia’s glorious vision of an all powerful mother government.

But more importantly, he is appealing to some wealthy donors to support his attempt to TAKE AWAY my religion and my guns. The only time I have to CLING to my gun or religion, is if someone comes to take them from me.

Media Matters and major media just happened to hype two big orchestrated stories. Fluke on taking away religion, and Trayvon on taking away guns. Does Media Matters meet with the president regularly, to coordinate a message using various outlets, including MSNBC?

Obama sold out the Catholics, but fixed things by just mandating insurance companies cover contraception for free. And he would gracefully allow Catholics a full year to dump their silly religious beliefs (since the are self insured in many cases) … their clingy grasp would surely weaken within that year.

Next Obama supported the phony narrative on Trayvon. Even uniformed Facebook denizens were organizing their support for this innocent, smiling, 12 year old black boy, who was gunned down for being black. Of course we know most of that narrative was phony, but the race card is played as a pry bar, to show guns are dangerous in white people’s hands.

HOW I FEEL ABOUT GUN CONTROL:

2. HOW I HOPE MY DAUGHTER WOULD RESPOND – http://www.youtube.com/watch?v=bedCVm7GZrA

They left out “Bible-toting”