From Linda in Tennessee, a variation on the Coexist bumper sticker:

I was riding shotgun today…

I couldn’t make out the last line. Here is a link to the sticker. 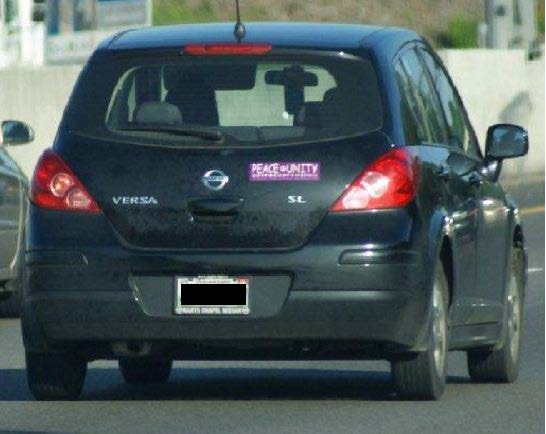 I guess interpreting coexist Obama as a dangerous but well intentioned dolt, is more hopeful than thinking he wants to destroy the system, and remake US as a Marxist strong central CONTROL state.

But the socialist childhood surroundings, the Alinskyite history, and the upbringing in “The Chicago Way” says otherwise. Linking that with his apparent love of Chavez and other dictators, leads me to believe Obama is willing to abuse power. The coexist movement is just another propaganda tool of a subversive, which appeals to the hippy dippy bumper sticker mentality crowd.

Obama is tied to Nation of Islam, Black Panthers who are black muslim supremacists. Islam and Marxism/Nazism/Communism have been brothers in hate since before WWI. They have made the destruction of Israel and the US their prime agenda.

Obama is doing them proud. We have been downgraded twice. He’s planned a fun Summer of riots, bloodshed, looting, class warfare division, hate and destruction for the US. It’s his re-election strategy.

DO NOT BE NAIVE or deceived – OBAMA IS A MUSLIM MARXIST.

From 2008:
“You have to pinch yourself. A Marxist radical, who all his life has
been mentored by, sat at the feet of, worshipped with, befriended,
endorsed the philosophy of, funded and been in turn funded, politically
promoted and supported by a nexus comprising black power, anti-white
racists, Jew-haters, revolutionary Marxists, unrepentant former
terrorists and Chicago mobsters, is on the verge of becoming President
of the United States. And apparently it’s considered impolite to say so.”

The truth was known then, but except for a few brave journalists, it was ignored, even by our FBI, CIA and CONGRESS.

Obama has proved Phillips words are true – in spades.
His re-election will mean Israel is attacked by the surrounding Arab nations with the help of the US.

NOT PEACE AND NOT COEXISTENCE. Islam and Marxist simply do not recognize those virtues.

More clearly than at any time in my (fairly long) life, that is a vacant idea.

Americans are more sharply divided than I have ever seen them be, and that division is not reconcilable.

In general, I consider this a good thing.

Yep, there is We The People, a.k.a. Americans, and then there is you.

Stay off the roads and highways….they were built by what you call ‘the collective.’

The preamble to the Constitution is pretty collectivist.

Maybe you ought to just find another country to mooch off, since you want to take advantage of things ‘the people’ have provided, like roads, and like a parasite, you don’t want to contribute.

Don’t let the door hit you in the ass on the way out.

You poor idiot, we dealt with these lies yesterday.

Or are you the “Washing-machine Charlie” kind of troll who just drops bombs of stupid, and then flies off to the next blog?

Most streets are built by private developers.

Roads and highways are built by private contractors, from funds from small government (which Conservatives support).

Small government is killed by BIG GOVERNMENT, as we see in California, where the roads stink.

I see you are namecalling again.

Moderator, this poster is doing something that is a banning offense.

“we’re talking about who pays for the roads, bridges and tunnels”

I know what we’re talking about better than do you (having built them). User fees, stupid, pay for construction.

Provided under small government (i.e., according to the Constitution’s limited design).

Like I said, you seem to be unaware of federal highway funds. I recently drove a few hours on an interstate highway. Went through some tunnels and over some bridges. Did not encounter any ‘user fees’.

Sure, there are toll bridges in places, but there are also plenty that are not toll-based.

Don’t bother telling me about conservatives and ‘small government’ when conservatives want to get their big government fingers into the most private aspects of our lives.

I won’t ask if you are really THIS stupid, ’cause it is APPARENT your ARE…at LEAST this stupid.

As are Federal taxes unique to heavy trucking.

“Maybe you ought to just find another country to mooch off, since you want to take advantage of things ‘the people’ have provided, like roads, and like a parasite, you don’t want to contribute.

Don’t let the door hit you in the ass on the way out.”

-Nice trolling Baghdadboater, how many times have we heard this same liberal twisty point.
SHOVEL READY!

Ms. Warren – I would have thought you had better things to do than troll here under the name Riverboater.

While we’re on the subject of highways, I think you’d find the Indiana experiment with private toll roads quite illuminating…

except you won’t allow any lumins into that crap-packed skull, will you?

And of course the mind-numbed leftist misunderstands the nature of community, mistakenly believing that collectivism is the same thing as community. And why shouldn’t they make that mistake? They call bolshevik-style agitation groups “community organizations.”

No, the mind-numbed leftist, who also mistakenly thinks of him/her/itself as a “liberal,” fails to understand that a community is a group of people who bring their diversity into a mutually beneficial (for most) unity. But the mind-numbed leftist will claim that is the very essence of collectivism. They fail to recognize the historical record showing that all leftist collectives are not interested in diversity, that they are not interested in individual accomplishment, and that they most certainly are not interested in dissent. The leftist collective is not a community. It is a monolithic tyranny. Why, one need merely observe the actions of labor unions in the U.S. to see the truth of this.

A community may decide that it needs a road or a bridge or a beat cop, and seek the means of making this desire a reality. The collective’s “bosses” will tell the organization’s members what they need and what they do not need, and then will take from its members the means of making the requirement a reality. A community allows dissent via a wide variety of means. A collective will not tolerate dissent, because dissent implies there is the potential for ideas better than the ruling class can decide, that there exists ideas other than the rulers’.

Ultimately, a collective become a closed organization composed of the aristocracy and the bound servants. The aristocracy will never give up its power once it has it, no matter the cost to the servants. Without that power, the aristocracy cannot survive. This has always been the way throughout history, to deny the manifest historical record could be a form of psychosis. This devolution by the idealistic collective into cynical aristocracy has even been called fascism at times.

But of course the mind-numbed leftist believes that fascism exists on the right. They thus self-identify as left-wing, and perpetuate their own myths about “social justice,” all the while enabling the aristocracy to secure its power. Observe the funding of labor union pension funds, the inequality between the union “bosses” and the members, and truth is revealed. Yet the mind-numbed leftist will tell us labor unions are the salvation of mankind.

That’s not the sticker…

from peacemonger…
“Hi. My name is Jerry, and I am a peace-a-holic. Our anniversary marks the day the U.S. Military Industrial Complex invaded Iraq. The name “Peacemonger” was given to me that day in 2003. This business was born from my need to object to war and violence as ‘retribution’ for what amounts to a state-sponsored false flag operation, which was enacted by the C.I.A. and others on 9/11/01. Read and watch more about this intense domestic crime.”
(links to 911 truther site)

I guess Dbag Jerry believes the CIA attacked the Pentagon and meant to take out the US Congress or the White House too.

Regardless of what Jerry believes, Saddam Hussein did not attack the Pentagon or try to take out the Congress or White House.

let me just say:
I’m sure life was pretty good in Iraq if you could avoid Saddam’s state sanctioned rape and torture chambers, political opposition execution or genocide, especially if you could get one of those cushy government jobs building SCUDS to fire at Israel, get in on the Oil for Food scam or get on the crew spiriting away chemical/biological or WMD precursors to Syria.

Pretty much nobody said he did, liar.

The Congress DID find 23 predicates supporting armed action in Iraq, and they were consistent with Clinton’s regime-change rhetoric. Well, BOTH Clintons…and the whole Deemocrat caucus (with one or two exceptions.)

Ms. Maines – I would have thought you had better things to do than troll here under the name Riverboater.

Unity? So the driver has given up on diversity? /mocking laughter

(Most of the) symbols are here http://lotus.org/docs/quotes.htm

I am amused by the Islam/Judaism/Christianity/Everyone Else lineup because that is the major flaw of this in practice. The Islamists would be perfectly happy to coexist as long as the next two are subservient and all the rest are dead.

Historically speaking, not so different than the Christianists, then.

Given absolute power, any of the authoritarian religions is going to run amok, and have.

Ms. Fluke – You don’t have anything better to do than troll here under the name Riverboater.

Showboater the troll was here pretending to be a Christian yesterday.

You can whine about how ‘boring’ you think I am…I don’t mind. You’re a one-trick pony and pretty boring yourself. “Collectivists….blah blah blah….”, same old song from you every day.

Like I said, historically speaking, not so different than the Christianists.

Given absolute power, any of the authoritarian religions is going to run amok, and have.

You have my permission to not read any post you find cumulative.

You don’t have permission to lie. Or commit rank hypocrisy. Or troll.

But you are a Collectivist, and seemingly driven by the deep, dark pathology common to your ilk.

The Crusades (the usual trite “evidence” of how terrible Christians are) was a response to the Muslim hordes conquering by sword, all the way to southern Europe, and the Christian emblems were just part of an attempt to rally the troops.

Catholics went through their dark ages, but were reformed by other Christians.

But other than everything, yeah, all religions are just the same. (sigh)

It’s always hilarious how the COEXIST sign begins with the moon and star of Islam as C. If there ever was an ideology that is virulently opposed to coexistence with anyone, even some of its own adherents, Islam is it.

One symbol looks like a pentagram, that must represent the White Devil suburban demon sprawlers that MetroMarxists despise so much.

Here is the poster prof of “CoExistence” and he’s Uma’s dad, too! Watch and weep…