These two women, working moms who are relatively recent entrants into the political fray, are examples of one of the most underreported stories of the movement: the Tea Party’s empowerment of women.

It is women in particular who have embraced the movement, either in leadership roles or in behind-the-scenes work. The stay-at-home moms and working women who sacrifice family time in order to commit themselves to the movement are inspiring generations of young American females.

Dana Loesch gave a take-no-prisoners speech that had people cheering her on from the furthest reaches of Daley Plaza. And Lt. Gov. Rebecca Kleefisch’s appeal to keep in the fight–as she is having to–wasn’t lost on the scores of women who had taken time off work and mothering to travel into to Monday’s Tea Party. 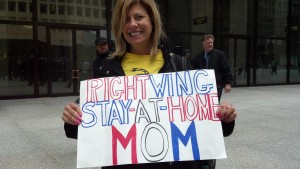 Lt. Gov. Kleefisch, subjected to recall along with Gov. Scott Walker, is facing an uphill battle. While Gov. Walker’s plight has caught the attention of national media–and donor’s wallets–Kleefisch is having trouble getting noticed in the shadow of the Walker spotlight. A defeated Kleefisch would leave Walker alone in the State House; in her place would be the president of the Wisconsin Firefighters Union.

So Kleefisch–and Loesch–and countless women across the country (Toby Marie Walker’s Waco Tea Party comes to mind as a particularly feisty and effective bunch) are fighting on. In doing so, the story of women and the Tea Party grows more prominent–and more difficult to ignore.

I heard Wisc. Lt Gov. Rebecca Kleefisch speak at the Chicago Tax Day Tea Party Rally yesterday. She is a dynamo for good.

Most of the “get it doners” in any TEA Party outfit of which I know are ladies.

At the rallies I’ve attended, they were half the crowd, and half the speakers, at minimum.

What is remarkable is that anybody would find that remarkable.

Love it that they took the fight to Obama’s Chicago hometown.

I know it’s shallow and sexist and wrong for me to say it (only because I’m in a hurry and pressed for time) but, our feminists sure are a lot prettier than their feminists!

“[O]ur feminists sure are a lot prettier than their feminists!”

Smell better and are smarter, too!

Just heard that PPP and Daily Kos polls have Walker up 5pts. against Tom Barrett, 7pts. against Kathleen Falk, and 12 pts against Kathleen Vinehout. among likely voters that means he reached at least 50% against all 4 deems. Lt. Gov. Kleefisch is up 46% to 40% against M. Mitchell. The split of that poll was 37% independent, 32% Republican and 31% Dem. which mirrors Rasmussen Reports of likely voters.

Vicki McKenna, Wisconsin Conservative talk radio host and Tea party sensation,discusses the Left’s attitude toward women AND how women were the key to the 2010 Tea Party revolution in this 2:40 excerpt from the documentary “Liberty or Lies?” http://fb.me/1Z55qJ8qT

I’ve attended three TP events. In each case, half or better of the attendees were women.

The icing on the cake is that they were showered, smiling and polite, 180 degrees different from the filthy, scowling and vicious skanks one finds at an Occupy rally.

Sent Rebecca a small donation last payday. When’s the election? I can send another next payday, if that will help.

I’m still seeing more “dislikes” on the people whose comments are supportive and/or make sense. We are being invaded by the trolls. Just because I am paranoid, doesn’t mean that they are not out to get us.

Instapundit » Blog Archive » THE TEA PARTY: America’s Greatest Feminist Movement? “It is women in particular who have embraced … | April 18, 2012 at 8:37 am

[…] TEA PARTY: America’s Greatest Feminist Movement? “It is women in particular who have embraced the movement, either in leadership roles or in […]

Friends, let’s be careful not to become so factioned that we restrict constructive dialogue and make enemies out of our fellow citizens. I am proud to be an outspoken proponent of the Tea Party and an experienced teacher, mother of three, homeschool mom, SAHM, professional, and student. We have it in us to make change if we remain skeptical AND open-minded. There is no need for ugly rhetoric.

I’d like to know what you’re talking about. Perhaps you could be more specific.

I, for one, am very pleased to see the ladies getting some well-deserved credit and respect for their activities in the TEA Parties. I do see some very ugly, anti-woman rhetoric coming from the so-called Democrats over the past several years. Their policies haven’t been good for women, either.

We had an absolutely fabulous event here in Oregon. Here’s a little fallout from the event:

Harvard educated Jefferson Smith and his Bus Project are the darlings of the Portland Progressive community. But it appears that he was not smart enough to recognize national citizen journalist James O’Keefe as he and his hidden cameras boarded the Bus Project for two whole days this past year.

Now that Jefferson Smith is a front runner in the race to be Portland’s next Mayor, it appears that he is poised to fall like an ACORN in the soon to be released Bus Project scandal involving major improprieties with minors directly involving Smith.

I’ve noticed that in this recent conservative/libertarian revival the women seem to have greater testicular fortitude than the men. Thoughts? Theories? Jokes?