The Four Horsemen of the Democrats’ 2012 Apocalypse

The Four Horsemen of the Democrats’ 2012 Apocalypse

Here’s a sticker for you from Wisconsin. While Madison is a lost cause, the rest of the state has been making a right turn for the past few years. 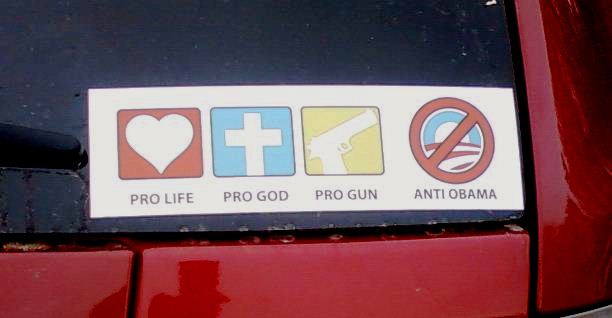 Professor, Your titles are great and this one is one of your best.

Love the sticker! Sure the Elite Establishment Republican core shudders in revulsion when they see this sticker.

But Think Progress points out Kerry actually released 20 years of tax returns when he was a candidate in 2004.

Best take Showboater’s “facts” with a mountain of salt.

It doesn’t even know where funding for our hiways comes from.

Namecalling again, eh little boy? Thought that was a banning offense on this blog.

Where do you think federal highway funds come from? Magic fairies?

If you are so against ‘collectivism’ as represented by our founding fathers (‘We The People’) and our nation, you should just leave. Find somewhere else to live.

In the meantime, stay off our collectivist roads, since you don’t want to contribute and just want to be a parasite.

Thank you for your morning demonstration of moronic, trite, and utterly WRONG Collectivist garbage.

Now everyone can put your nonsense in proper prospective.

You also show that you are obdurately stupid, and cannot even be taught.

The “Thumbs Up” and “Thumbs Down” buttons are all very well and good, but shouldn’t there be a snooze button when the Riverboaters come to bore?

Actually, The Lonely Conservative blog site has a feature whereby sufficient negative thumbs down “hides” the comment unless one chooses to click to read the troll garbage. I highly recommend it.

But can someone refute Riverboats’ Fact.?

That romney said this is not disputed I got the impression that Riverboat was saying this “2 year’ stand was bad strategy (7 very tradable to the opposition ).

But did Kerry release 20 years of tax returns? (given that theresa is the money bags in the family they might tell only 1/2 the story).

Before you criticize because you don’t like the poster -answer his assertion.

I mentioned on an earlier post about my Church’s strong stance against Obamacare’s mandate that all private health care plans must cover sterilization, abortifacients, and contraception.

Bishop Daniel Jenky, Diocese of Peoria, recently addressed a large group about this. Oh, there is definitely going to be a fight!!

Wonder what Pelosi, Seebelious and Biden think of this fight? Do they stand with Obama or their Church (ok, I know the answer).

Ted Nugent’s recent little tough-guy diatribe (delivered at the NRA) is even funnier when you remember that he was such a coward about going to Vietnam that he actually shat his own pants to avoid going.

You aren’t just a liar.

You are a stupid, attention-whore, liar.

Riverboat has put 5 points out there.

Bush & Cheney did not go to Vietnam . True

“Pro-Life” is redefined as “anti-woman” by the left. Killing the child in the womb at 22 weeks is a victory for them … how dare anyone even consider a “fetus” (that’s over a pound and a foot in length) to be a human. The woman wants control of her body … and that fetus is apparently just a cancer until it escapes her womb.

Of course if a man killed a puppy the same size, most of these self righteous leftists would be outraged. They are pro puppy life, and would agree that puppy killers should be beaten and imprisoned. But killing a fetus is a victory for women … or so some women would have us believe. Requiring a young mother to be to view a sonogram of the fetus/child they ask to execute, is considered inhumane.

Religion aside, I really don’t get how these puppy lovers can be so anxious to take human life. (the recent battle was in Georgia I think, where they want to reduce the timing down to 22 weeks instead of 27 or so, and a few vocal women are outraged at these “women haters”.)

But no you are wrong – he posted on the voting thread.

Your title on this post, is pure genius. How completely and perfectly fitting, that narrative is for the last 4 years.

You could make a bundle of cash, adding that headline to that bumper sticker. I would buy one for myself and everyone I know in a heartbeat.

May it be an apocalypse for both Obama and his factions as well as his identical white twin Romney and his. Looking at and listening to Romney for 4-8 years would be just as intolerable.

FROM ANOTHER MASTER OF TITLES:
“Armageddon Married In The Morning”
http://www.youtube.com/watch?feature=player_embedded&v=pxaXZ4-9xx0