Which came first, the terrorism or the war?

From reader Jonathan in Boston:

I’m a long-time reader of your blog. Please keep up the good work!

I spotted these bumper stickers on my way to school today. You would think I would be immune to this after 3 years of commuting to Cambridge, but this sticker just encapsulated so concisely what is wrong with the left that I had to share it with you. The only thing that surprises me is that the driver didn’t have a “Coexist” sticker on there as well – I guess that one was probably reserved for when he upgrades to a Prius. 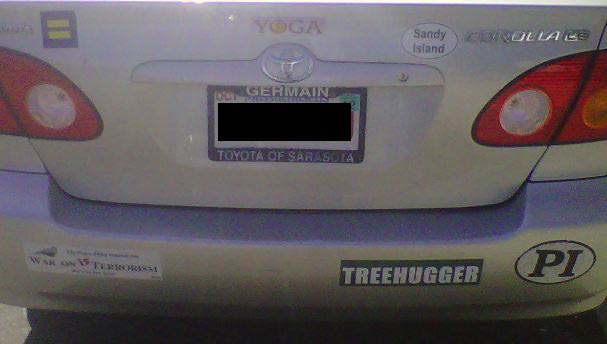 I’d say if bringing war to them brought terror to their hearts, great.

Though I prefer it when it brings death to them.

It is obvious we can’t bring enlightenment to them.

And they don’t want any part of coexist.

From: GENGHIS KAHN: THE EMPEROR OF ALL MEN – Harold Lamb:

One day in the pavilion at Karakorum he [Genghis Kahn] asked an officer of the Mongol guard what, in all the world, could bring the greatest happiness.

“The open steppe, a clear day, and a swift horse under you,” responded the officer after a little thought, “and a falcon on your wrist to start up hares.”

“Nay,” responded the Kahn, “to crush your enemies, to see them fall at your feet — to take their horses and goods and hear the lamentation of their women. That is best.”

WAR – a state of open and declared armed hostile conflict between two states or nations.

TERRORISM – Systematic use of terror as a means of coercion.

No… I do not see any similarity between the two definitions. One is open and declared, the other hides in the dark. One targets an enemy in uniform, the other targets the civilian.

Those who fight in wars should be known as warriors, whereas the other is known as a terrorist. To equate the two means all who fought in war are terrorist.

Now, tell the concentration camp survivor he was liberated by a terrorist, or walk the FREE streets of Korea and tell the citizens here they were set free by terrorist. What fool would walk into Arlington and say “here lay thousand upon thousand terrorist”? What imbecile would dare to walk up to a man grieving lost brothers at the Vietnam Nam memorial and ask “why are you shedding tears for a terrorist?”

When I see the flag being lowered and hear the haunting trumpet play Taps, I think of the days I wore those jump wings and remember all we were called on to sacrifice. And you have the audacity to consider a part of my life as “terrorism”.

I will not taint the Prof’s blog by typing out the vilev words I really want to use.

DocWahala, glad he is in Korea today and not Boston, else he would be filing a claim for damages to his front bumper that plowed into some liberal’s backend.

And, Doc, thanks for serving.

And pretentiousness to boot.

It’s not enough to write War Is Terrorism. Nooo, they have to write War On Is Terrorism, ostentatiously “correcting” the defective thinking of the knuckledraggers—and getting it completely wrong.

Maybe their ongoing Orwellian reconfiguration of language is not a deep plot, but rather an inability to use words correctly.

I blame George Bush for this idiotic sticker. If Bush hadn’t prosecuted the war on terrorism so vigorously, trained the men to kill Osama so assiduously, and brought the war home to the caves and sandpits, that moron would be wailing about Islamictrorism and government’s failure to do something about it. So, blame Bush!

Cowardly fools like that driver are only able to express such stupid opinions because they are protected by men and women who possess far more wisdom and courage.

“The war on terror is over,” a senior official in the State Department official tells the National Journal. “Now that we have killed most of al Qaida, now that people have come to see legitimate means of expression, people who once might have gone into al Qaida see an opportunity for a legitimate Islamism.”
******************************

That’s how the fanatics teach it: submission is a virtue.

want to watch a peacenik go crazy? Ask them to name those periods of sustained peace began with a truce, cease fire or capitulation. Then rattle of the periods of peace that started with decisive victories.