Should be banned within 50 feet of schools

Should be banned within 50 feet of schools

From reader and frequent photographer Ulises in Maryland:

Caught at a stoplight in Hunt Valley… I’m pretty sure that if they fact check the claim about smoking and liberalism, smoking will turn out to be safer. By the way, I didn’t noticed the ‘1/20/13’ bumper sticker until later…consider it a bonus… 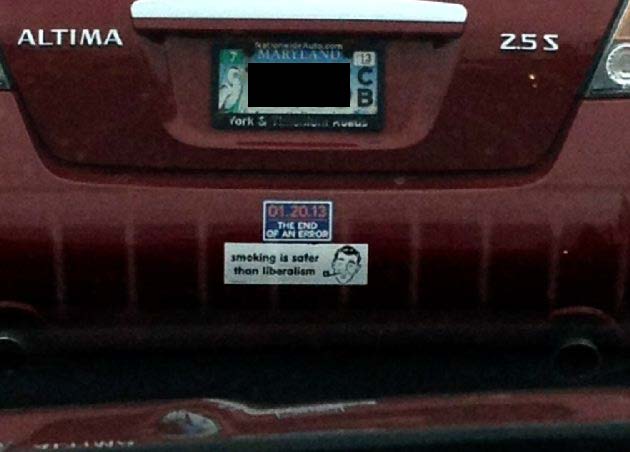 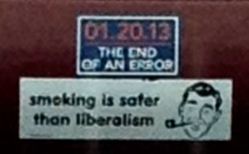 No, it’s okay; it doesn’t have trans fats or is a sugary soft drink.

Wow.. No doubt there are hundreds of words we could substitute for “smoking”. Radiation, swimming with sharks, laughing at Chuck Norris… The list goes on.

DocWahala, believes WORK is to liberals what garlic is to vampires. Work may stink, and the other two are blood suckers.

The liberal religion of hypocrisy forbids dietary dangers with one hand while promoting much more dangerous, even deadly sexual behaviors with the other.

Romney got Jennings to help him do the same in Massachusetts, Obama’s test lab for implementation of LBGTQWYX agenda objectives. Romney even installed ‘gay marriage’ by executive fiat, violating the Massachusetts Constitution.

So much for Safe Schools in the US of A.

Keep GDFKN sexual politics away from our children and out of our schools!
Stop recruiting and brainwashing our children.
Stop hiding the truth about dangers of sexual promiscuity and deviant sexual behaviors.

Go to Miriam Grossman’s website. Read her books, Unprotected and You’re Teaching My Child What ?!? http://www.miriamgrossmanmd.com/

Stop the insanity, stupidity and criminal victimization of our children.

Our children are also being brainwashed/indoctrinated/conditioned with the politics-based ideologies, myths of greenism, population control until they think death is better and more noble than life:
http://www.transfigurations.blogspot.com/2012/04/green-washing-young-mind.html
http://educationviews.org/2012/04/25/kids-think-were-better-off-dead/

Politics-based pseudo-science is being fomented by the leftists who have taken over our schools via the leftist-infiltrated Dept. of Education:
http://directorblue.blogspot.com/2012/04/definitive-leftist-family-tree.html

If you are an academic who questions/dissents from the Political Correct narrative on environment, sexual, social issues, you can and probably will be fired or not hired.

Bill Whittle on the tyranny of ideologies and theories over fact/evidence/reality, “The Love of Theories is the Root of All Evil”
http://www.therightscoop.com/bill-whittle-the-love-of-theory-is-the-root-of-all-evil/

“Should be banned within 50 feet of schools.”

LOL! One of your best, Professor!

Our daughter goes to my old elementary school. When I was there in the mid-1960s, a helluva lot more people smoked than now. I don’t remember any problems with parents creating clouds of smoke at school in those days.

But now, when smokers are as rare as common sense in this progressive paradise, there’s a big sign on the fence saying, “No Smoking,” as well as signs saying, “No Dogs,” “No Skateboarding,” etc.

The game of tag has been banned at the school for 10 years, as this Fox News piece explains,

“A Santa Monica elementary school has banned the game of tag, once synonymous with youth and innocence, because they say it creates self-esteem issues among weaker and slower children.”

So, your joke about banning liberalism within 50 feet of schools is funny … but it’s funny in a very, very true way.

LukeHandCool (who had leg braces and crutches like Forest Gump in the first grade in 1965 at this school … and when he was tagged as “it,” unable to walk, he was definitely slower than the other kids … but being common sense kids, we improvised … and I could tag the other kids with my crutches).